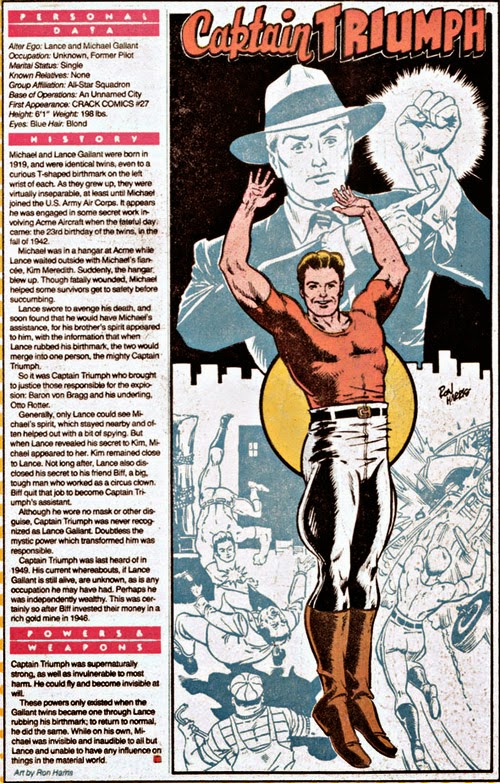 The facts: If he'd been picked to be a member of the Freedom Fighters, you'd remember him... The creation of artist Alfred Andriola and an unknown writer, the Quality Comics headliner first appeared in Crack Comics #27 (1943), Milton Caniff's former assistant would only stick with the strip for 6 months. Several artists followed, with Golden Age great Reed Randall doing an unbroken 17-issue run. Captain Triumph was featured on the covers of Crack until the series ended with issue #62 (1949). Decades later, Roy Thomas had plans to use Captain Triumph in All-Star Squadron - he even appeared on the cover of issue #1 (1981) - but claims the series was cancelled before he had a chance to.
How you could have heard of him: He appeared in a flashback in Animal Man #7 fighting the Red Mask. The Titans #36 makes him a friend of Liberty Belle's and turns him into a murderer. A female version of the character appears in Uncle Sam and the Freedom Fighters #3. Erik Larsen's Next Issue Project used him in its Crack Comics #63 (so did the character really slip into public domain?) and in Savage Dragon #140 in connection to that. However, his most substantial post-40s role has to be in James Robinson's The Golden Age, in which Lance Gallant is retired and resists his ghostly brother's urging to become Captain Triumph again. The mini-series isn't canon, but Robinson nevertheless used it in his Starman (#62 to be precise), where we're told Triumph was killed by the Mist.
Example story: Crack Comics #56 (1948) "Gossip Leads To Murder" by William Woolfolk and Reed Randall 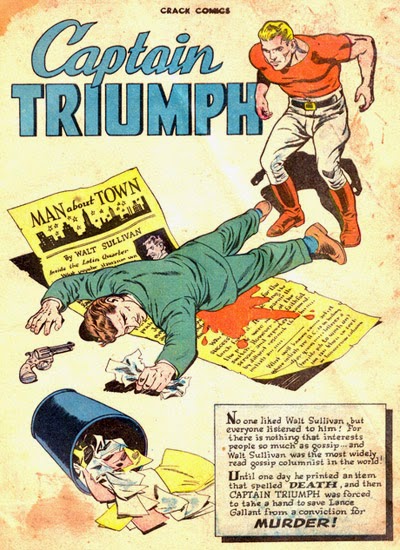 I find I can't resist a Reed Randall-drawn story. Quality Comics deserved its name because it really did employ some of the slickest artists of the Golden Age, Randall among them, surely. This particular story starts with a fire witnessed by gossip columnist Walt Sullivan, who has a nose for celebs so doesn't care a jot about a no-name victim. And of course by Lance Gallant, who quickly merges with his brother's ghost to become Captaiiiiiiinnnnnn Triumpphhhhhh!!! 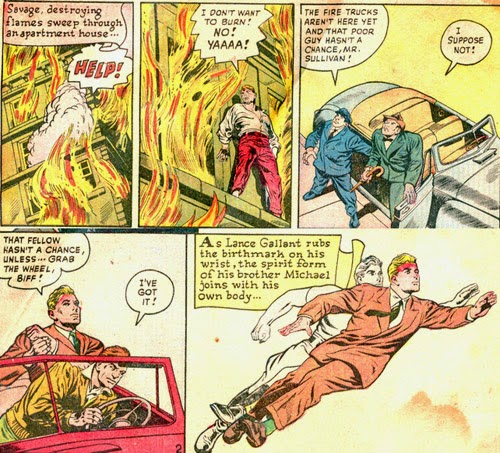 Now THAT'S a name people will recognize! (Yes, I realize the irony today.) Sullivan gets particularly excited when Lance's girl (and his brother's widow) Kim Meredith runs up for an embrace. 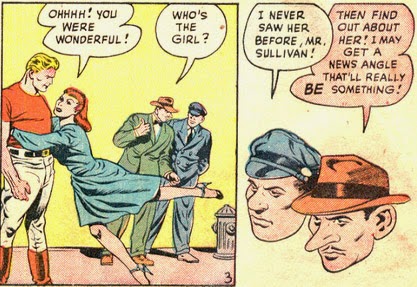 The next day, Sullivan's column includes three smutty items. Married actress Bonnie Frank has apparently seduced a gangster to make him back her newest play, Senator Hartree was once convicted for drug smuggling (it IS called Crack Comics, kids), and Kim is, it seems, cheating on her fiancé with a superhero. That gets Lance real angry, and unlike other superheroes who hide behind meeker identities, he's quick to visit Sullivan's office. 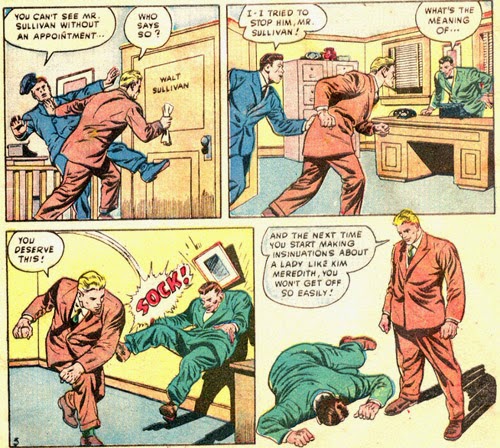 Well, to be fair, Kim DID get engaged to her dead fiancé's twin brother and both brothers are "in" Captain Triumph. If Facebook existed in 1948, I'm sure their relationship would be "complicated". Undeterred by a little manhandling, Sullivan sits down to write a scathing column for the next day's paper, but he's once again interrupted.

That's the kind of interruption I hate. Real hard to get back to it after something like that. So distracting. (Something very close to it, in fact, happened while I was writing those words. Where was I..? Damn, lost my train of thought...) The next morning, homicide detectives are knocking at Lance's door and he's soon under arrest and thrown in the clink as the number one suspect. He's not the only one with motive, of course, but he's the only one who assaulted Sullivan over his column in the last 24 hours. You can throw Lance in jail, but not Captain Triumph:

Meanwhile, Kim and Captain Triumph's Pal Biff(TM) are searching Sullivan's files for clues. Perhaps in tomorrow's edition? Who would have to gain from it being forever unpublished? Oh no! Look out! An ill-defined shadow! (Reed Randall, you're so cool.)

Though Cap shows up to save his friends, the malefactor nevertheless manages to escape. Knowing Sullivan was just going to do a follow-up on the day's items, the supporting cast runs to find actress Bonnie Frank, while Cap flies to the gangster she's been tied to and the senator with a past. First up, Machine-Gun Maloney:

Oops! He was already caught and heading for Alcatraz! Well, everybody makes mistakes. (To be fair, his butler was a little vague about his "trip", so Cap didn't have all the information. The Senator had some crucial information though: He was being blackmailed, but not by Sullivan. Therefore, the killer must have had ready access to Sullivan's notes before they saw print, someone who could sell Lance Gallant out to the cops, someone who, knowing the gossip about Bonnie Frank, would have reason to come after her... 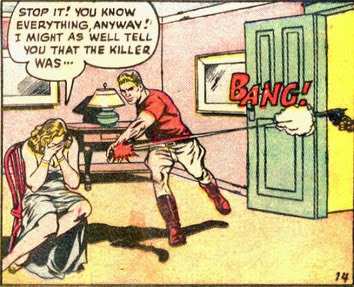 That's right, the guy in a blue suit playing chauffeur, bodyguard and assistant to Walt Sullivan. As the story wraps, exposition worthy of the Silver Age (Captain Triumph was ahead of his time), we learn he was Bonnie's husband, that they were in league with each other to blackmail the senator, that Walt found out and tried to smoke them out by writing the very gossip they counted on to stay secret AND creating a rift between them with a possible affair between Bonnie and Malone... Look, he solves the mystery and goes back to jail in time to get released, that's all you really need to know right? For anything more, just check the gossip pages circa September 1948.

Who's Next? Triumph was by no means the most obscure Captain in that issue of Who' Who...
Comics Golden Age Who's This?

LondonKdS said…
If Facebook existed in 1948, I'm sure their relationship would be "complicated"

snell said…
Captain T is an interesting precursor to Brother Voodoo's setup (including the possibility of icky relationships). Plus, we need more heroes in jodhpurs.
March 10, 2015 at 12:34 PM

Siskoid said…
Horrifying image: Those aren't jodhpurs, they're double-thighs - the one clue that he is two people in one.
March 10, 2015 at 1:07 PM

American Hawkman said…
Pretty much all of the Quality guys that aren't actively Plastic Man or the Blackhawks are technically public domain. (Well, and the Spirit, obviously.) I like Captain Triumph, even if, as was mentioned in the Animal-Man appearance, he had the personality of a brick.
March 10, 2015 at 7:15 PM

Siskoid said…
Hahaha. And every other time after that. There's a Baptist university called Crandall in town... why that got into my head just then is a mystery.
March 11, 2015 at 8:34 AM