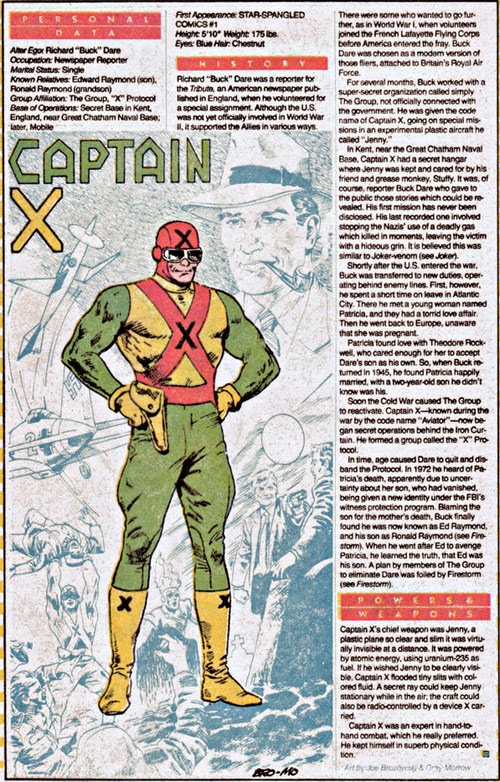 The facts: Appearing in Star-Spangled Comics #1-7 (1941), Captain X, "Unofficial Ace of the R.A.F.", created by Jon Blummer, had a very short Golden Age career - he was replaced in Star Spangled by a comedy feature called Pennyless Palmer - but would be repurposed by John Ostrander as Ronnie "Firestorm" Raymond's grandfather, where he would shortly be killed by Stalnoivolk. No, not even a mention in Roy Thomas' All-Star Squadron and other 1940s-referencing works.
How you could have heard of him: Not atypically, James Robinson referenced him in Golden Age, Starman, and Shade. Maybe you caught it?
Example story: Star Spangled Comics #1 (1941) "Dam the English Channel" by Jon L. Blummer 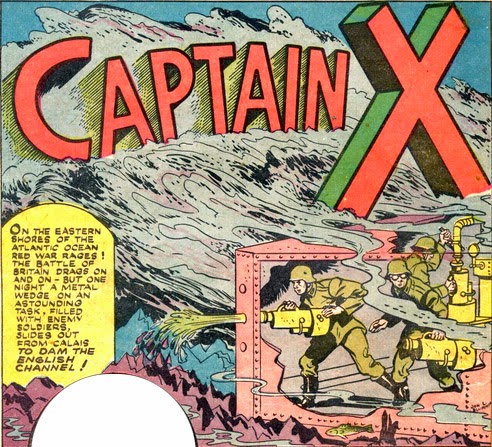 Blummer was obviously interested in aviation heroes like radio's Captain Midnight, because he also created Hop Harrigan and with that character at least, had some success. Hop would feature in 99 issues of All-American Comics and in a movie serial to boot! Not so Captain X, a more fanciful take on the aviator hero, with a secret identity as a reporter and everything.

In his very first story, he's charged with writer a news article about himself! Sound familiar? But no telephone booth or red cape for Buck Dare. Instead, he lives in a cave with his trusty butler mechanic Stuffy! Uh... I'm waiting for an original idea here... And it's not Stuffy's jokes. 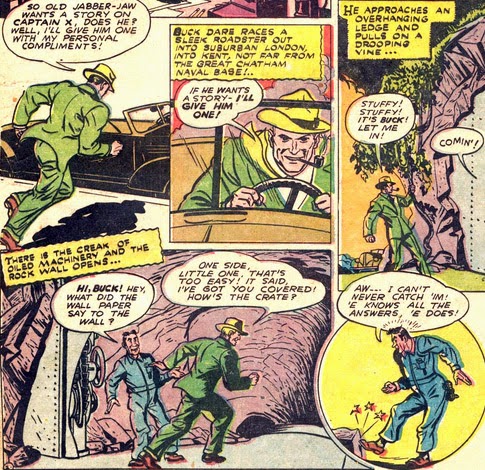 So Jenny, Captain X's angular, plastic plane... Is it a precursor to Wonder Woman's invisible jet?

It won't give you cancer, honest! It's got a load of tricks too, including remote control capability and a vibrating ray that holds her steady over the ground - it's the first VTOL craft!

What ensues is violence for violence's sake, because Captain X is first and foremost an action strip. It's got a LOT of fisticuffs. More than I'll show today. But here's a full page of Nazi-smashing. 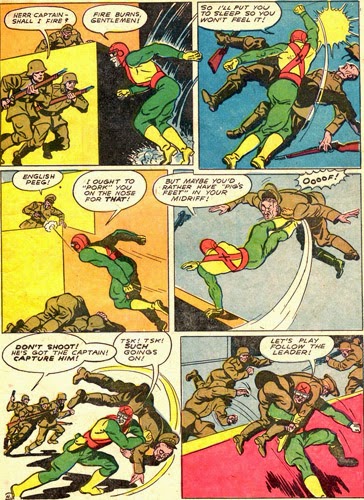 In the zinger department, Captain X makes Spider-Man look like a mute! Sheesh! His mission: To make headlines. But how? Secondary mission: To capture a Nazi officer, which would be useful to the Allied cause. So then, accidental mission: Stop the Nazis from damming up the Channel with their molten metal guns so tanks can drive across to Britain. Now of course, Captain X could just have let them fail on their own, because that would never work, but it's fun to see him shoot holes in the plot the plot's staging cabin. 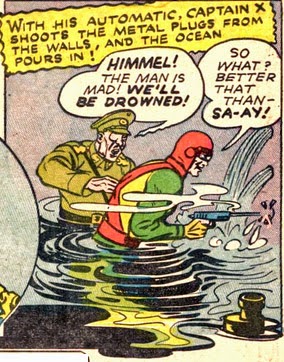 The commander freaks out; everyone else evacuates, and the fearless Captain X pushes himself from the ocean floor by creating metal behind him. It's slow enough he doesn't get the bends. Lovely scientific accuracy in the middle of all this.

Captain X gets out of the Channel alive, with his commandant in tow, and recalls Jenny with his remote control. "What magic is this?" asks the Ratzi who had guns that shot liquid metal out of them to build a wall underwater. They fly off and the Captain radios an Allied air base to go out and bomb the Germans' wall-making operation. While he's in Britain's air space, he does a barrel roll and dumps the Nazi commander out of Jenny to be picked up by air base personnel. 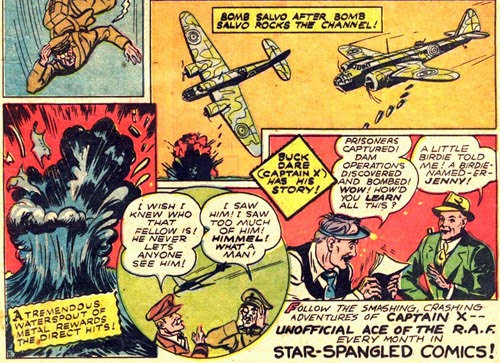 And that's how Captain X became big news! Overseas. So not big news at all. I imagine that's how he was forgotten so quickly. Too bad though. Garish costume aside, it had that Golden Age craziness I like, and lots of Nazi-thumping, which I also like.

Who's Next? Sword & Sorcery I've never even heard of.
Comics Golden Age Who's This?

American Hawkman said…
I thought it was pretty neat that they made him Firestorm's grandfather. The codename was worth repurposing, at least... Citizen X from the New Freedom Fighters is almost certainly supposed to be the modernized version.
March 17, 2015 at 7:12 AM

Siskoid said…
You're almost certainly right, though I'm surprised that franchise would use non-Quality heroes.
March 17, 2015 at 9:54 AM