August 19, 2015
The feature inspired by great cosplay and fan art where I imagine various DC MARVEL! properties taken to the small screen and wonder aloud just what their shows would be like. Today's pitch: Hawkeye. 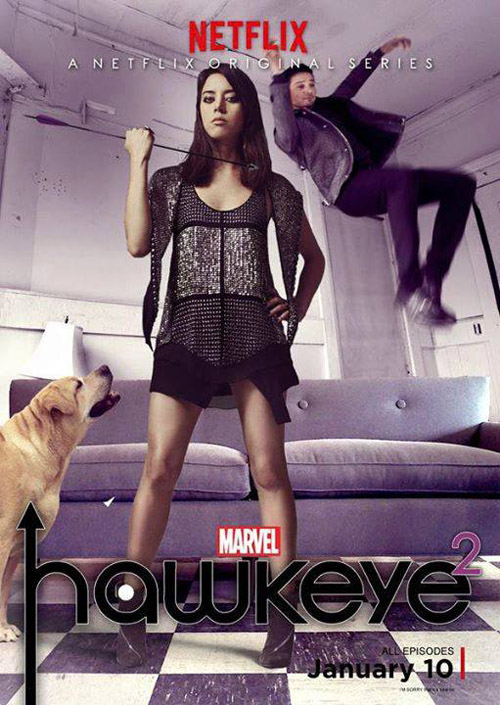 Art by: @NotTonyHarrison (on Tumblr)

And you thought it was over! Well, no! When I saw this fan-made poster, I knew Arrowed wasn't over, it was just switching companies. After all, Marvel's been working at broadening its cinematic universe on television (and Netflix), especially its "street heroes", leaving the need for more incredible special effects to the big screen. But Marvel has a LOT of street heroes, and some of them are already in the movies. No chance of seeing Jeremy Renner doing TV anytime soon, but NotTonyHarrison's fancast of the Slott-Aja series makes me wish it would happen anyway.

But what would that show be like? The comic experiments with the comics medium in a way television couldn't, but it could still be quirky. We could definitely have an episode where Hawkeye is deaf and we can't hear a thing. Or one where the chronology is all jumbled. Or one from PizzaDog's point of view. And though a pathetic Hawkguy, obviously put out by his movie wife, running a low-rental tenement and protecting it from comedy Russian hoods would be fun, let's not forget Kate Bishop's adventures as an up-and-comer who gets, for the moment at least, to outshine her "mentor". Aubrey Plaza could definitely use her usual persona to crack wise as the over-the-hill archer, and give Renner a lot of time off to do movies. He does all his stuff in the standing set; she gets to go on location.

And even though it has archery in common, really, this show would be nothing like Arrow.

What would you do with it?
Arrowed TV