August 14, 2015
It happened in the Legion of Super-Heroes' third volume, #32 to be exact. Heroes from the 30th century had been kidnapped, depowered and kept prisoner on a planet. Heroes like Saturn Girl, Dream Girl, Atmos, and... Jon Arbuckle from Garfield? 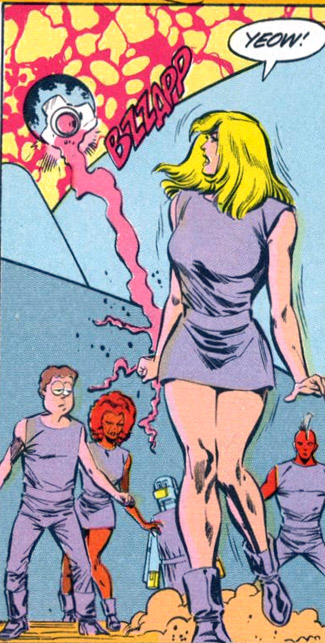 Or possibly his descendant. But that would mean he procreated. Which doesn't seem likely from the strips, does it?

I wonder what his powers are. And if he'd have any chance at all in a Legion try-out.

Would they drum him out as soon as he started having conversations with his imaginary cat?
Comics Legion

Toby'c said…
"But that would mean he procreated. Which doesn't seem likely from the strips, does it?"
Well, he has been in a stable relationship with Liz for about eight years now.
August 14, 2015 at 6:16 AM

Anonymous said…
You hint at the answer yourself. While some would say that nothing ever happens in "Garfield", in reality there is change, but it occurs at a glacial pace. I have no trouble believing that "Garfield" will still be running in the 30th century (albeit in holographic form rather than paper), and that it will take about 1000 years to cover the story arc where Lyman's disappearance is investigated (remember Lyman, Odie's owner?) and Jon is tried and convicted.

Green Luthor said…
In the "Legion roster" Keith Giffen did for LSH #300, either he or the inker slipped Garfield into the background, between Gas Girl and Evolvo Lad. I guess both Jon and Garfield survive into the 30th century, and Garfield maybe joins the Heroes of Lallor...?
August 14, 2015 at 3:53 PM

Siskoid said…
Anon: You're right. The way time moves in superhero comics, it's a wonder DC's entire ROSTER of heroes didn't make it to the 30th century!