Snapshots of Jimmy Olsen #31: The Pal of Steel 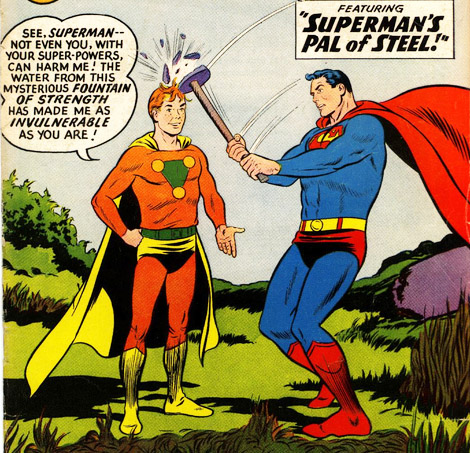 Crazy news out of Metropolis - Perry reads it right off the wire - there's a rumor that the River Styx runs right under the city! Well, a real newsman knows when to ignore ridiculous mythological rumors and when NOT to! So off Clark and Jimmy go to explore the caves surrounding Metropolis. And wouldn't you know it, there's a stream running through one of them. And Jimmy stumbles into Clark and makes him fall into it. And since there's no such thing as the River Styx, or if there is, there's no way it's in America, that wouldn't be important. Except...

That's what I can a series of unfortunate events. Jimmy throws himself in to also gain Achilles' fabled invulnerability and is soon trying to dip his hands in lava-heated water. But since Superman's secret identity is more important than his friend's safety, you just know it's going to be a game of making Jimmy believe he really does have powers. But Clark, are you going to blow on every super-heated stream Jimmy wants to dive into? Seeing as his boys are invulnerable now, Perry White sends Jimmy to interview various daredevils on the job. Meanwhile, Clark will try to find the antidote to the River Styx in case bad guys want to take advantage of it (because that's something reporters do). Of course, he knows it's not really the Styx, but he creates an "earthquake" to bury the cave and keep Jimmy from coming back, at least. So yeah, how about just telling Jimmy the effects wore off for you and so should for him? He never thinks of that. Instead, he lets Jimmy buy that ridiculous costume from the cover, for a salary-breaking (in 1959) 50$, and Jimmy climbs up a spire with a steeplejack and dares the lightning to hit him.

Jimmy survives, but his outfit is ruined by the rain. He buys another, even uglier one for 75$ and tries to go down Metropolis Falls in a barrel! Yes, Jimmy. Your invulnerability is apparently transferable to the wooden barrel. Seems like EVERYBODY might have a fever in this thing. Again, the outfit is ruined, so Jimmy blows the rest of his cash on a Musketeer outfit (whatever) and plans to go into a lion's cage. Superman goes in first to wrestle the big cat into a frenzy, but what he actually does is scotch tape the lion's claws. 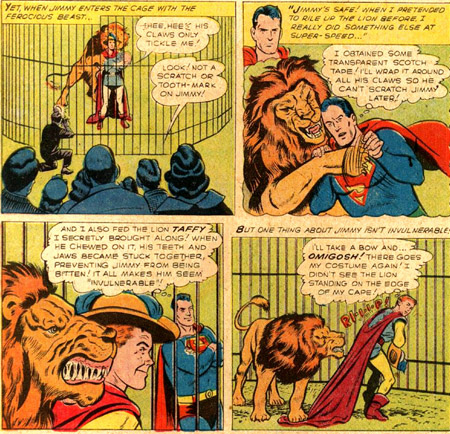 Because a lion can't possibly hurt you if his claws are taped and his teeth are taffied. It doesn't have powerful muscles or anything. You're perfectly safe, unless you're a costume. So now Clark is pretty sure Jimmy'll keep out of trouble because he NEVER gets up to any shenanigans in his usual dress greens. Oops! Jimmy goes straight to an atomic rocket refueling station that's about to blow. Jimmy's jeopardy is on TV. So will Clark risk blowing his secret identity in front of Perry White to go save his friend from an imminent explosion? NOPE! 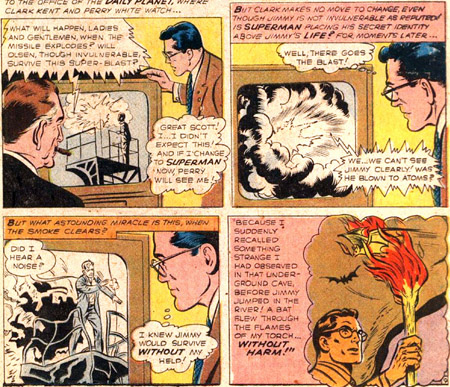 Notice: He's afraid for Jimmy at first, and then it explodes and THEN he claims he "suddenly recalled" the bats in the cave were impervious to fire. So Jimmy would be fine after all, because guess what, IT REALLY WAS THE RIVER STYX! UNDER METROPOLIS! WHATEVER! Jimmy comes into the office complaining of a rock in his shoe, and now we know that unlike Achilles' dip to greatness, the river's lost some potency over the centuries and Jimmy's invulnerability was short-lived. And he doesn't even have the cool costumes to remember it by.
Comics Jimmy Olsen Silver Age Superman