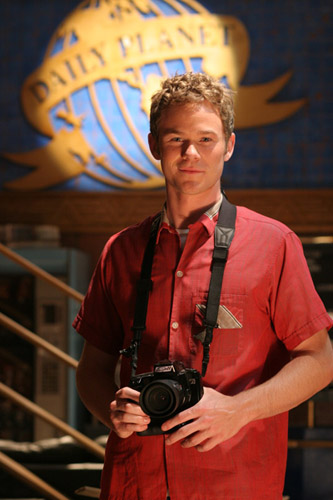 Wait... if Smallville was about Clark Kent's teenage years, how can Jimmy Olsen be in it and not be, like, 6 years old?! Ahhh, but you mean James "Jimmy" Bartholomew Olsen. This is Henry James "Jimmy" Olsen, his brother. Also a photographer for the Daily Planet. I see where you got confused. Li'l Jimmy IS in Smallville too, played by Ryan Harder. See? 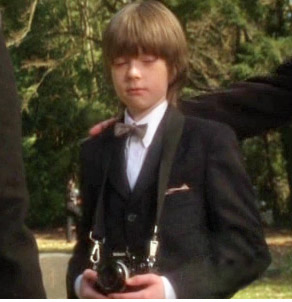 Jimmy Sr. had an eventful life on the show, appearing in no less than 53 episodes. [Spoilers spoilers spoilers!] He married and divorced Chloe Sullivan (before she married Olivier Queen), and died at Doomsday's hands (well, his alter ego's), leaving a legacy for Jimmy Jr. to follow.

That's an interesting wrinkle, actually. What if Clark/Superman is so fond of Jimmy because he was an old friend of his brother/father's? Perhaps he feels responsible for it too. Superman as surrogate father, or "Big Brother", to the orphaned Jimmy, as opposed to "Best Pal". While the Smallville Season 10 comics were pretty great, they still showed Superman's early career and did not allow for that kind of "10 years on" development. What would the "veteran Superman" of the Smallville continuity be like?
Jimmy Olsen TV

Toby'c said…
" Ahhh, but you mean James "Jimmy" Bartholomew Olsen. This is Henry James "Jimmy" Olsen, his dad."
Brother, as I recall.

Also, it wasn't actually Doomsday who killed him , it was his human form Davis, who'd already been separated from the monster by that point.
August 22, 2015 at 12:49 PM

Toby'c said…
From this and from previous posts on the subject.

I still think it's worth checking out from the start, maybe after X-Files. Personally I feel it shows some improvement with each season, despite some recurring annoyances.
August 22, 2015 at 1:31 PM

Siskoid said…
It certainly has the length required of these projects. My misgivings have more to do with variety, with too much superhero in the mix.
August 22, 2015 at 1:43 PM

Martin Gray said…
Are American. folk in the habit of giving brothers the same name? What a stupid business, they should've just made Jimmy a couple of years younger.

I managed to get through a few episodes towards the end - when they had JSA members of similar - but most of the first 57 years of the show were unwatchable due to weeping Lana and miserable Clark.
August 24, 2015 at 3:38 PM

Siskoid said…
Well, the older is called Henry, and the younger James. James is Henry's middle name, and it became his nickname, even though there's already a younger Jimmy in the family... yeah, that IS weird.
August 24, 2015 at 3:45 PM