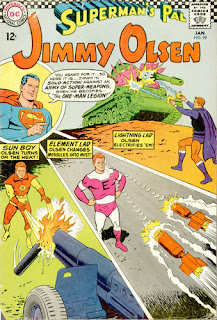 Teenage Legion writer Jim Shooter wrote an action-packed story in which Jimmy gets a very special gift from the Legion of Super-Heroes: A flight ring and three Legion uniforms that give the wearer that Legionnaire's powers! Jimmy is very trusting of a box that says L.L. on it though. That could have come from Lex Luthor. Or more terrifying still, Lucy Lane! 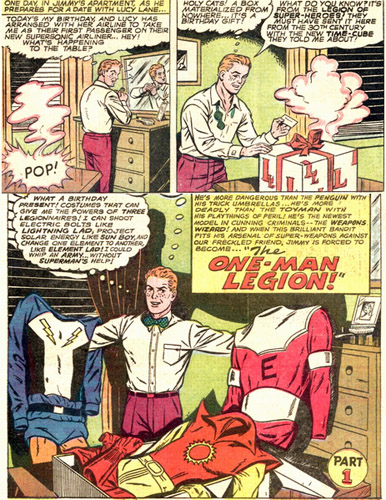 We kid Lucy because we love. In fact, Jimmy is late to meet her. He's supposed to be the first (and only) passenger on an experimental supersonic passenger plane, something arranged by Lucy who is its lone stewardess. (So why is that pillow taking so long?) But no one's late when they have a flight right! 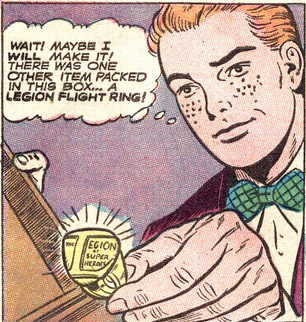 Check out that rare close-up! So Jimmy flies to the airport and gets on the plane just in time. Unfortunately, it's attacked and hijacked by a villain called the Weapons Wizard (or Mr. W for short) who has tones of high-tech vehicles, weapons and gadgets at his disposal on his uncharted island, and the filthy habit of beating his girlfriend. No, really. It's all rather despicable. He puts Lucy in a death trap to make Jimmy give up Superman's secret identity, because after all, if anyone would know that secret, it would be his "Best Pal". But of course Jimmy doesn't. But he does have a flight ring, so he escapes, along with his luggage full of Legionnaire suits. Dressing up as Lighting Lad, he shows that he might even be better at using Garth's powers better than the Lad himself. 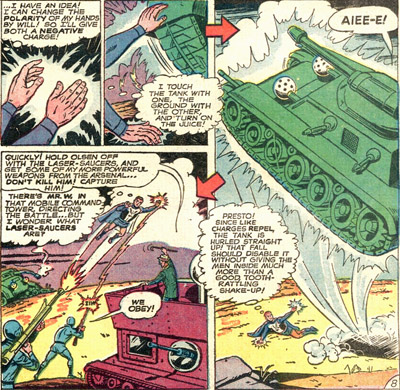 Guys, I can't possibly spoil the whole thing, but Shooter likes fights and he gives us fights. The action in this thing belies its Silver Age origins. Eventually, Mr. W's forces damage the suit and ground it with liquid rubber. I can't believe Jimmy even survives this: 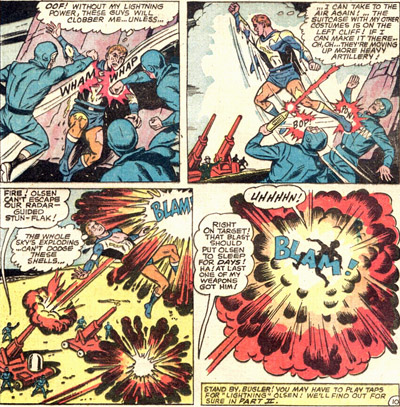 He manages to stay conscious and goes back to his valise where he dons Element Lad's costume. You know, that's one powerful Legionnaire whose powers can apparently be simulated by gloveless spandex... 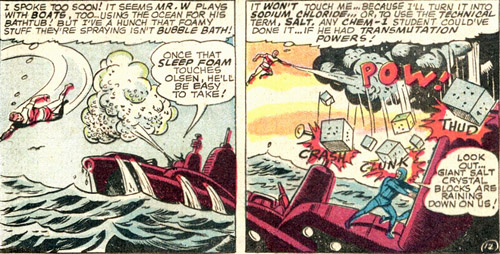 Here again, after a protracted fight, the villains find a way to damage the suit, namely, sonics - a force that can't be transmuted. And while I'm not showing THAT piece of action either, this marks the second time Mr. W's girlfriend gets a hard smack for insisting he not kill Jimmy/lose his soul. He's a lost cause, dearie. By now, even the flight ring is damaged, but no worries, the Sun Boy suit has Feather Fall. 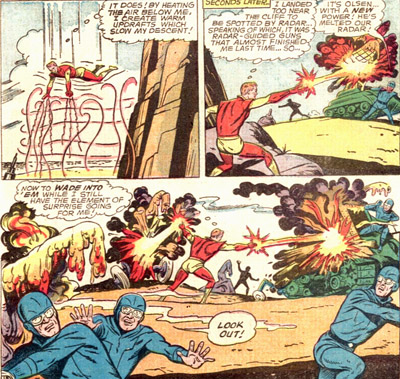 The henchmen bail, but Mr. W gets involved more directly and though it takes a missile launcher, he finally gets the better of Jimmy. Jim finds himself in front of a firing squad with Lucy and the rest of the airplane's crew. They seem doomed, even with one of Jimmy's arms untied by the future Mrs. W. He's out of costumes, but there's ONE OTHER Legionnaire Jimmy can become, and that's Elastic Lad - his OWN identity as an honorary member of the Legion! 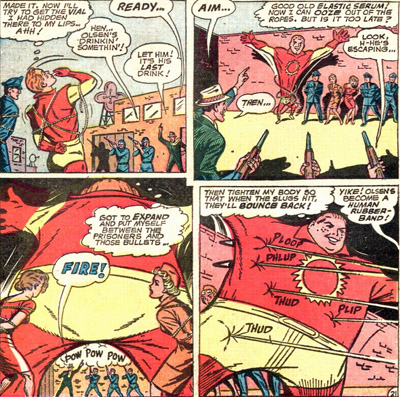 And it's with those powers that he finally defeats the Weapons Wizard and his cohorts! He had it in him all along. Once done, he activates his signal watch and Superman comes to take them all to the mainland. And Mr. W's poor, abused girlfriend? Superman super-hypnotizes her so she forgets she ever knew and loved him, free to start her life over as a single amnesiac. All's well that ends well! (No, he doesn't do the same trick to Jimmy to free him from Lucy, why do you ask?)
Comics Jimmy Olsen Legion Silver Age