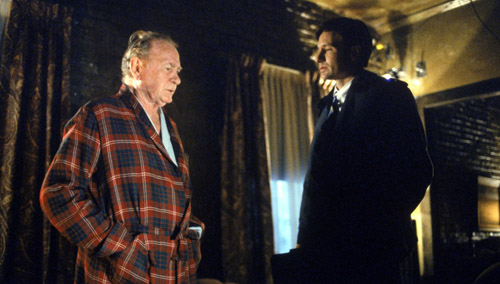 ACTUAL DOCUMENTED ACCOUNT: An American soldier implanted with an alien killer spider in the 1950s. Mulder is told how his father connects to him.

REVIEW: Still borrowing time from the leads to finish the X-Files movie, so no Scully in this episode. Barely any Mulder. Heck, barely any Mulder Sr. even though most of the story happens in the 50s, when he was an active agent of the Conspiracy! It's really Agent Arthur Dales' story, and the fact that he's played by Darren McGavin - Kolchak himself, a noted influence for the X-Files - might serve as a hook, except it's not exactly true either. McGavin's scenes are all in 1990; he's the narrator. The story itself happens to a younger Dales played by Fredric Lane. He's good, but you know what I mean. So that it manages to hold the viewer's full attention is perhaps a small miracle, and it does this by deepening the world - showing how the weirdness has been with us (and the Bureau) for a long time - and presenting the case as a twinned origin of the X-Files - we meet the woman who started filing unsolved cases under "X", and Mulder gets involved, albeit tangentially, with his first X-file.

The case itself is a standard enough (for this show, anyway) super-soldier story, one where the an unknown organism was implanted into a man, which turned him into a killing machine. Skur (and in the opening scene, my subtitles had to confirm they weren't shouting "Skinner", which would have made it a very different episode) can, and in fact must, not without some body horror involved, make his parasite devour another person's innards, turning them into mummies. He's killed in 1990 with Mulder's name on his lips, which is what gets Fox interested. At the height of the McCarthy era, he was young, more dangerous, and a somehow sympathetic figure. A man turned into a monster against his will. In some sense, the story mirrors the kind of cases Mulder and Scully sometimes investigate, though the "implant" is perhaps more primitive than black oil or whatever turns people into alien hybrids. So even the threat has the right retro feel, along with toxicology tests that take 6 to 8 weeks, J. Edgar Hoover ranting about communists like he means it, and the hazy diffuse look of the film.

Travelers might create a clear character in the resourceful Agent Dales, one who is kept from doing the right thing by his superiors and desperately wants to find out the truth about his partner's death, but it doesn't do that much for Bill Mulder. His appearances are brief and his dead eyes don't reveal very much. If he seems to betray the Conspiracy at first, that appears to be a lie. He warns Dales only to manipulate him into finding Skur for him. And if his allowing Skur to escape and hide in a cabin in Wisconsin seems decent, remember that Skur keeps on killing and feeding for the next 38 years. The only reason to do this, Dales is right, is to keep the truth from coming out while simultaneously allowing the Conspiracy to keep studying the implanted creature and its host.

REWATCHABILITY: Medium-High - An episode that has a strong sense of place and time, and that offers a look into the start of the X-Files. The absence of the leads is unfortunate, but the tale stands well on its own.
X-Files