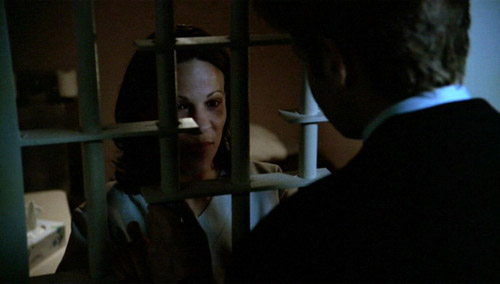 ACTUAL DOCUMENTED ACCOUNT: The only suspect in a murder investigation is a clairvoyant blind woman.

REVIEW: It's a strange season when an episode that follows the normal formula is actually atypical. And perhaps even stranger that such an episode would be a highlight of that season. This is due in no small part to Lilli Taylor's performance as Marty Glenn, a woman blind from birth who, as it turns out, is psychically connected to her mother's killer and, at times, sees through his eyes. Marty is a complex character, fiercely proud of her accomplishments and adaptation, a real smart mouth with no respect for the authorities, and yet deeply compassionate and trying to stop the violence she sees. Her motivation remains elusive and ambiguous, and that's what I love most about Mind's Eye. Since we know she has these powers, we're a step ahead of the police and the FBI, but the mystery of her motive lingers.

She seems to be protecting the killer, at first, and evidence will show that he's actually her father. Then, she not only tries but succeeds in killing him, freeing herself from the nightmare of his violence. The agents seem content to think she's better off in the dark than getting visions from prison. The truth is somewhere between the two. He was her only link to sight, and getting him caught or killed would cut her off from beauty (like the ocean she prizes so much) as well as ugliness. In keeping him free - trying to stop his murders, and failing, cleaning them up - she protects the possibility of beauty. Taking the rap for him means a lifetime in prison, but still receiving such stimuli. And she does feel guilty for her impotence and for no having ratted him out. In the end, there was no choice. The law was bearing down, so the only possibilities were visions from prison and no visions at all. That she chose to herself go to jail, and remain in darkness forever, is something she builds to. Wrapped up in that decision is a release and a revenge.

An episode can certainly succeed on the strength of a single guest-star (Eve, for example), but there are plenty of little moments to admire in Mind's Eye. Mulder laughably being called a skeptic. The O.J. Simpson jokes. The shock horror moment of a bloody sponge hitting the floor. Good stuff.

REWATCHABILITY: High - Atypically typical, Mind's Eye is all about a complex guest character and doesn't feel routine at all.
X-Files