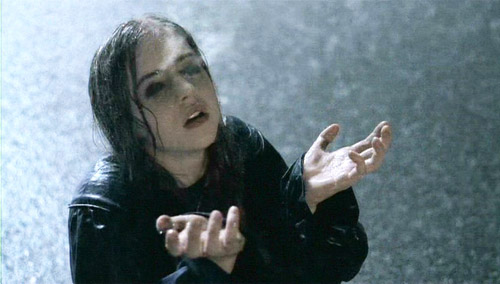 ACTUAL DOCUMENTED ACCOUNT: Angelic girls are being killed by forces from either Heaven or Hell.

REVIEW: We've seen the war between Heaven and Hell before (in Revelations, but definitely not in Millennium, right? Come on, Carter, who you kidding?!) and All Souls certainly connects to it, if tangentially. After all, the story of the Seraphim who fathered four Nephilim and had to retrieve their souls before the Devil got to them (not a real story, so far as I know, nor does it occur in Cherubim lore, the actual four-faced angels), has the two sides of the War competing, but not necessarily in the context of the end days. Not explicitly, anyway. The girls with eyes melted out, frozen in prayer, is a strong image, and giving the Seraphim and the Devil similar heat powers keeps the audience guessing about who is actually winning.

But this is really all background for Scully's personal story, presented as a confession. There again, it's not clear who wins until the end, because Scully is distraught either way. If the Seraphim gets to the girls first, their souls are rescued, but their bodies die. Young girls with strange origins dying sudden, unexplained deaths is too close to Scully, and the ghost of her daughter Emily haunts her throughout. The Catholic connection makes her hallucinations seem more revelatory than traumatic, and Scully's conclusion is that the angel chose her to help as a way to heal her grief. It's not explicitly said, but one could wonder if Scully fears that her artificially-made child did not have a soul. By making the last girl's enraptured "departure" coincide with a vision of Emily's own, the writers are giving Scully a positive answer, and closure too. But it all weighs heavily on her, because a girl is nevertheless dead. The war for Scully's soul is between faith and science/reason.

With Mulder out on another case at the beginning (or at a porn theater, I must admit, really not my favorite recurring joke), it seemed probable he would have a very small role in this, again for movie reasons. Not so. Once he's called in, he's a strong presence, and continuing the theme of Mulder and Scully's role reversals, is forced into the skeptic's. Of course, Christianity is Mulder's blind spot, and he discounts any supernatural events connected to it. Perhaps it's a profiler thing. He's seen too many psychotics blame God for their actions. Frank Black can certainly back him up on this. And he's naturally worried about Scully; she's usually HIS reasonable compass, and playing that role with her is unsettling. Nevertheless, unless someone slipped Scully a tab of designer acid, we the audience have objective proof all of this is happening (nothing unusual about this). Of course, there are other possibilities...

THE TRUTH IS OUT THERE: Shapeshifters, killer light, mutant girls with the exact same DNA... The old Mulder would have claimed this was all part of the alien conspiracy, dressed up in Christian robes to confuse the locals. The various orders of angels (the fiery Seraphim especially) HAVE been connected to UFOlogy in conspiracy texts, after all.

REWATCHABILITY: Medium-High - A very strong episode for Scully, using her background to nice effect. I just wish the Judaeo-Christian myth used to fuel the story was actually taken from apocryphal scripture. As is, it's just clunky third act exposition.
X-Files