August 06, 2015
"Scully, you have to believe me. Nobody else on this whole damn planet does or ever will. You're my one in five billion." 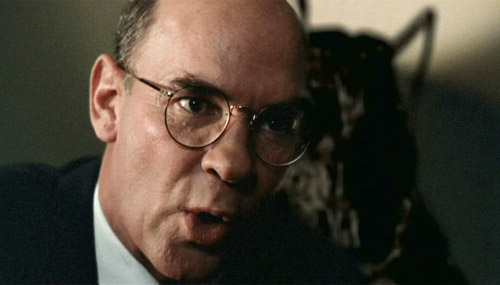 ACTUAL DOCUMENTED ACCOUNT: A man goes postal after seeing his boss turn into a life-sucking insect.

REVIEW: Vince Gilligan channels Kafka in this office space horror story about how working in a call center destroys your soul and turns you into a lifeless zombie. The boss is even a big ugly bug. If you're too "awake", ask too many questions, then you risk seeing the truth. And that is so terrifying, you're likely to fall prey to something primal in yourself. Fear, leading to violence. And the creature knows the effect is has in its true form; it uses it to get recalcitrants out of the way. One such recalcitrant is Gary Lambert (played by Continuum's Brian Markinson, he also plays a recurring character on Millennium) who, possibly thanks to the previous episode's lack of supernatural elements, might very well be imagining it. We follow him in his descent into madness, until Mulder walks into a hostage crisis, almost comically, and the power to see the truth is communicated.

And then it's Mulder who's seen as crazy! That's an interesting story structure, but of course, it takes people a while to think something is wrong because he's the guy who's ALWAYS ranting about something impossible or other. In fact, after spending the whole season more or less letting go of that persona, and the early part of this episode moaning about the reputation he's made for himself at the bureau, he sees something and though he's called irrational, to us, that's good old Mulder! He's back! Of COURSE he goes too far. Of COURSE telling truth to power won't work. What's actually amazing is that this is the first time he's sent to a mental hospital for it!

And there we get a key scene. He tells Scully, who is in full skeptic mode, that she's the only one who can believe him and who MUST believe him. He reminds her of her role in his life, of the thing he NEEDS from her. He needs to be believed, and she's uniquely suited to believing him because of their shared experience. And even she must admit that there are oddities here - the "zombie" Lambert killed has a suspicious time of death that predates the hostage crisis - but it's not until this scene that she makes a real effort to find out more. And acting on Mulder's counsel, when she finds the WILLINGNESS to believe, that's when she sees the truth and manages to save Mulder from the Bug Boss and his creepy zombie nurse. And even so, in her report to Skinner, she can't bring herself to say what she saw. She blames a shared madness. But then perhaps The X-Files and shows like it ARE a little like a shared madness, something impossible and unexplainable we manage to experience apart from our zombie, desk-bound lives...

REWATCHABILITY: High - An interesting, metaphorical monster, but more than that, the episode gets at the core of the Mulder-Scully relationship and brings it back to its roots.
X-Files