August 09, 2015
"I looked for good and then evil came under me. And I waited for the light and came darkness. The circle is about as good as it's gonna get. No beginning. No end. No boundaries. Yet nothing but what lies inside the circle and what lies outside." 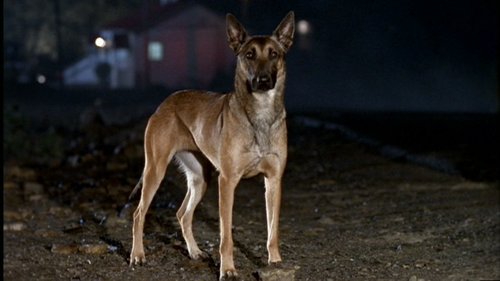 ACTUAL DOCUMENTED ACCOUNT: A small town has (literally) gone to the dogs.

REVIEW: What a weird episode. It's certainly the most supernatural Millennium has ever gotten. Frank is sent to the tiny town of Bucksnort where a pack of dogs has been attacking, and in one case killing, people. The recent deaths are actual a pretext to have him meet an old man living in the area, apparently keeping tabs on the way nature is reacting to the end days. He delivers some enigmatic exposition about the balance between good and evil, apparently uses stone circles to mystically keep the dogs at bay (though he walks among them unmolested), and predicts Frank's gift (once again paranormal in the way it's described) will only increase once he's gotten over his current family drama. What a Millennium Group member is doing in the woods isn't entirely clear, but the way Watts talks about it, every member must eventually meet with him and learn a lesson. More cryptic still is the confusion between the Group and the "event", meaning that members might be doing something FOR the end days, not necessarily working to prevent them. And between the countdown, the man's comments, and the opening flash of the doomsday comet (which I now realize looks like the hands of a clock), Morgan & Wong very much want us to believe in an inevitable Apocalypse in the near future, not just pre-Y2K "millennial chaos". But all the talk surrounding the Ouroboros also tells me the end is merely the start of another cycle, so an era may end, but not the physical world.

The theme is balance, and if the Millennium Group has a goal, it's to maintain that balance. For that to happen, we must accept evil has as much a place as good. The problem is that evil is on the rise, throwing the balance out of whack. The implication is that if the world ends while the scales are tipped in either direction, it's a bad thing. The consequences remain murky. The whole thing with the dogs is meant to represent another balancing act, this one between nature and civilization. A man from L.A. builds a house in the woods, which gives the dogs permission to enter the town, which they'd always left alone before. It's The Birds, only with canines (probably would have been wolves, but for practical considerations), with fearful townspeople coming across as sinister even when they're trying to be helpful. And then there's the balance in Frank's life, which has always been so important to the show. While we can at least feel relieved that he gets to see Jordan, that loss of balance has cost him the use of his gift (the same thing happened after Bletcher's murder).

While Frank's family introduced the light needed so that the show didn't become oppressively bleak - and still does, moments with Jordan or the dog still play that role - Morgan & Wong seem intent to replace or complement it with comic relief. It works when it's about Frank's irritation, such as when the people of Bucksnort keep calling him their new sheriff. It's not just humorous, it's also ABOUT something. Frank spends an inordinate amount of time in this episode telling people what he is NOT - not the sheriff, not called Franklin - and we know he's in the process of finding himself after crossing the line in the previous episode. He is not these things, but what is he? The question's still in the air. Even being a member of the Millennium Group has lost its meaning because he doesn't quite know what they're really about anymore. The more they trust him with things, the less he does them, and where his relationship with Watts has always been smooth in the past, here the two of them are quite testy with one another. Where the comedy DOES NOT work is with the infusion of over-the-top, caricatured characters, like Michael Beebe, a rather flamboyant coffee lover whose manufactured ebullience clashes with Frank's naturalism. This kind of over-acting just doesn't work opposite Henrikson's minimalism. And while happy music can underscore horror ironically from time to time, it seems to happen over and over again in Beware of the Dog; it's annoying.

REWATCHABILITY: Medium - As a horror story about wild dogs, it works pretty well, but the humor doesn't, and the continuing reconfiguration of what the show is about detracts from it.
Millennium

LiamKav said…
I now have that theme song stuck in my head.