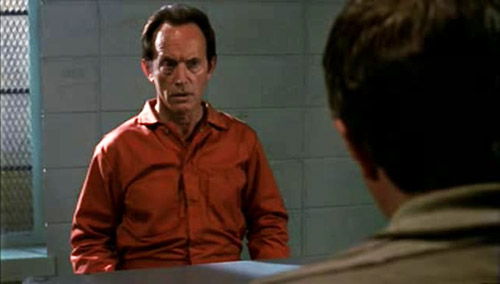 ACTUAL DOCUMENTED ACCOUNT: An investigation into child abuse and murder in a Daycare puts Frank in hot water thanks to an evil little girl.

REVIEW: Morgan and Wong presumably wrote a child abuse story to make the audience squirm, but when you discover (early on, it's not much of a mystery) that a 5 year old is responsible, I think you start to squirm for another reason. See, by making it about a child who CRIES abuse and falsely accuses various adults, including Frank, the show trivializes the actual problem and throws it back on the victims. The episode is also very indulgent on the writers/showrunners' parts, adding Morgan's wife as another consultant for the Millennium Group. Don't get me wrong, I normally like Kristen Cloke, but she gives the character of Lara Means a strange lisp I can't rightly explain. And with her powers, similar to Frank's, an ability to see an angel when bad things are about to happen, she's part of the duo's agenda to make Millennium more supernatural. For his part, Frank sees devils when the evil child is in the room. We're very far from "profiling" now. And of course, Morgan and Wong need their quirks of humor - upbeat "ironic" music and a vibrating bed moment, for example. They're not bad, but they don't fit the tone of the show.

Truth be told, I'm having a hard time recognizing the deep, intriguing show I have high marks to all through its first season. Doomsday having a date the Millennium Group knows about, and its agents talking like the apocalypse is a foregone conclusion, doesn't have the urgency it should. Besides, does that even make sense in the context of these people having families? Where's the hopelessness if this is true? The separation subplot is proving more annoying than fruitful, and Catherine acting like she has absolutely no idea what the Group does goes against what we know to be true from Season 1. Her support of Frank has turned into bitterness, and while I understand the story thread, it's taken something away from the show. I can't even get behind what the Group is doing. It sends two agents to the same place, on opposite sides no less, as a... test? What's the point? And how do they know there's an "evil" there that must be stopped before it grows out of control? And then they seem to adopt the girl, along with other evil kids (maybe)? They're not mysterious, they're douchebags.

And the whole parallel thread about Jordan spitting blood and having a mysterious wound in her mouth... What is that? The Frank/Jordan scenes initially link to the theme of how one might perceive abuse where it doesn't exist - getting angry at her in a store, Frank attracts some judgmental stares that are another facet of what the Daycare lady is getting in her small town. At that point, I thought we'd have a strong episode on our hands. Alas, for the plot to work, Jordan must contract that strange wound AND Frank has to do something stupid like go into a little girl's room with her without any other adults present. Predictable to everyone but prescient Frank? That's hard to believe. Sure, okay, he gets a nice speech about his love for his daughter, but the circumstances that force him to deliver it feel incredibly manufactured.

THE TRUTH IS OUT THERE: I know the show is still playing coy about being part of the X-Files universe, but if you'd like to link the girl's appearance with Scully's daughter - they're played by the same actress - you could say that she's another of Scully's progeny, genetically modified and implanted into Mrs. Barbakow, a monstrous child created by the Conspiracy. But surely, that's going too far...

REWATCHABILITY: Medium-Low - Contrived and wrong-headed, I fear Millennium is leaving all its best elements behind.
Millennium