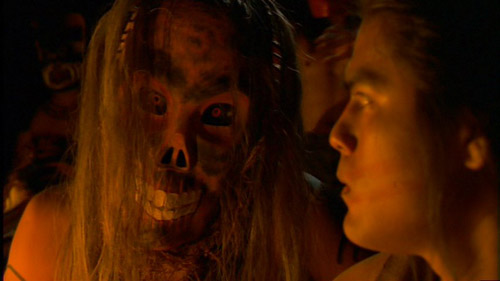 ACTUAL DOCUMENTED ACCOUNT: With the help of an anthropologist, Frank investigates a murder involving a Native American apocalyptic prophecy.

REVIEW: A Native American "ethnic" episode is a very X-Files thing to do, though Millennium at least avoids the problem of using some sort of fictional/generic tribe by blending various cultures together as part of the story. A hidden tribe, scattered across all other tribes is an interesting idea, and Frank's accusation that they are no doubt manufacturing a tradition from disparate parts is probably fair. Justifying the tribal mishmash goes a long way. It's intriguing that these Natives have their own apocalypse story and that in some way, it comes true (as if some seer had seen these events and interpreted them from his perspective). Bison running from a Wild West show isn't particularly apocalyptic, but it is a striking image. More intriguing still is the notion that this apocalypse is cultural. Is that how we should understand the End of Days that worries the Millennium Group? Not a physical, planetary cataclysm, but a cultural one, the end of an era?

Another X-Files trope is the matching of Frank with a female partner. We've seen this before - there was Linsday Crouse in Kingdom Come, and Kristen Cloke in the previous episode - with anthropologist Liz Michaels (Amy Steel) playing the Scully part. Unfortunately, she's the kind of "passionate scientist" we see on TV, a woman who's an angry activist half the time, and an exposition machine the rest. There's something absurd about her leading the police around based on visions and prophecies and their just following, but the character never really achieves any kind of truth. She's there to explain things and believe Frank. She's his partner du jour, but a limited one with little depth. I'd much rather have had the kooky coroner for a few more scenes.

This is the first episode where Frank confirms his powers are psychic in origin (or at least have become paranormal if they didn't start out that way). And the Natives are after him because, like the first murder, he's expected to "see" something on the "other side" (namely, their returning ancestors). And he does have relevant visions. I call shenanigans on his walking out of the sewers on his own power at the end there, after having been force-fed snake venom, but otherwise, making him part of the prophecy and final ceremony makes sense. Am I finally warming to the idea that he does have supernatural powers? Well since I was convinced half the time he already had them in Season 1, it's not a hard sell.

REWATCHABILITY: Medium - As far as "ethnic" episodes go, it's better than most, though most of the guest characters are strictly TV types that border on cliché.
Millennium