August 13, 2015
"Do you ever find yourself talking with the dead? Since Willie's death, I catch myself every day, involuntarily talking with him as if he were with me." - Abraham Lincoln (upon the death of his son) 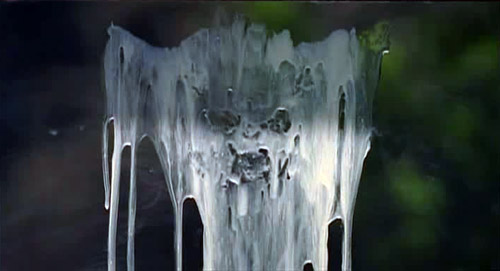 ACTUAL DOCUMENTED ACCOUNT: On Halloween night, Frank is haunted by an event from his youth.

REVIEW: What a strange episode. Strange in a good way. The Curse of Frank Black is a minimalist, interior work, that straddles the line between mundane slice of life and creepy horror show, and though technically very little happens, it should move the character forward in a positive way. I was scared (not scared in a good way) at first that they were playing the Halloween episode for laughs. After all, this is an episode where Frank's first line is "D'oh!" and Jordan later wears a Marge Simpson costume (way to Fox it up, geez), but this would-be comedy is just as much a fake-out as the screaming woman on a TV screen or the at first sinister carving of the pumpkin. The episode refuses to stick to formula.

Despite the lack of serial killers, the creep factor is quite high. Things are falling apart for Frank, we know this, and the quiet loneliness of the episode speaks to that. It also manifests somewhat supernaturally through equipment breakdowns. Lights flicker, pumpkin candles go out and light back up, kids refuse to come for treats at his door, teenagers break into the yellow house, doors jam, TVs turn on by themselves. Even the diagetic music has trouble turning itself on. And there are memes, for lack of a better word, pushing him to confront a memory (or ghost), as the word ACTS and the number 268 keep cropping up (in addition to a lurking devil figure). While scene by scene, it's rather hard to ignore that supernatural forces are at work, what's interesting is that these events can pretty much all be taken as Frank's imagination (after all, his "visions" are nearly hallucinations already). He knows his Bible enough to "see" the reference everywhere. His psyche knows it's wounded and must be healed lest he become the neighborhood's boogeyman.

The few flashbacks allow us to meet a despondent WWII veteran who was the neighborhood boogeyman when Frank was a child. This existentialist was haunted by the death of his squad mates, and later committed suicide. What Frank comes to realize through this episode is that HE'S become this man. Kids avoid his house, teenagers break into his basement and tell the tale of Bletcher's murder and Frank's mad visions (this ghost story just happens to be true), and he even finds himself egging the house himself. Everyone's fear of him turns him to self-loathing. In the end, he identifies with Dean Winters' disturbed character. The experience is a warning. He must clean himself up, make things right with Catherine, possibly even leave the Millennium Group, and we see him move in that direction by episode's end. The whole night was an introspective puzzle for Frank to solve. He was essentially profiling himself. Fascinating.

REWATCHABILITY: High - Some might call it boring, but the melding of the mundane and ordinary with the creepy and terrifying shows how far down Frank has fallen, where the dullness of his life has become a threat. It sticks to its stylistic guns and delivers a real gutpunch (if you'll allow the mixed metaphor - or not that mixed if you've ever called your biceps "guns").
Millennium