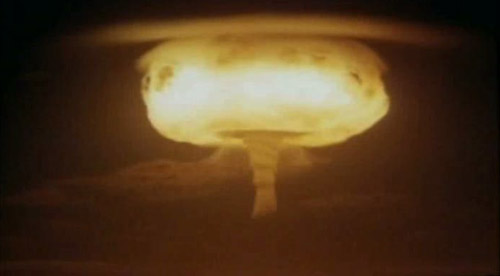 ACTUAL DOCUMENTED ACCOUNT: Frank, Watts and Lara race to recover a busload of kidnapped school children before a massive storm kills them.

REVIEW: The episode that feels most like the first season since probably the season opener, 19:19 has Frank and Watts track Revelations-happy nuts acting on the idea that the apocalypse is coming. Oh, Lara Means is back, and though still a little lispy, she at least brings something unique to the investigation, and it's not visions of angels either. There IS a supernatural element here, but it's ambiguous. The kidnapped kids are actually "saved" from destructive tornado (a pretty good effect) by the apocalypse cult, on the intuition that one of them is some kind of peacemaker in the coming war (or the war that's already started and we just don't know it yet). Or is it all coincidence? The rest of the episode is indeed pretty mundane and naturalistic, with the protagonists putting the pieces together with intelligence, not hallucinations, and the small town police procedural showcasing non-sensational chases and shootouts.

What puts the episode over the top, I think, is how gray its characters are. Both the cops and the "villains" quote scripture and are God-fearing folk. The apocalypse cult is actually saving lives (at least until one of them starts shooting), though it neither trusts the system, nor the does the system trust them. The sheriff goes ballistic and commits acts of police brutality, but who wouldn't understand his reaction to his little girl being taken. The cult also talks a lot about "being worthy" and tests the bus driver (for example) quite harshly. The way he keeps his cool and takes care of the kids tells us he definitely is, but the cult don't see it that way, or can't. In other words, it all depends on your perspective, and all perspectives are necessarily limited. That's the point of the cultist viewing all media at once, trying to grasp the big picture. So when he gives himself to the twister - a phenomenon sometimes associated with God - we can't easily feel like he had it coming. And yet, he and his friends had the town in the grip of a nightmare.

THE TRUTH IS OUT THERE: Notably, Watts is informed that Frank has an outstanding traffic ticket back in Seattle, involving a vehicle that isn't even his own. Frank calls it on of those distractions that have been cropping up lately, joining the false accusation of child abuse, those crank phone calls, and possibly even some of the happenings in The Curse of Frank Black. We'll have to keep tracking his unknown nemesis' "pranks" as the season continues, and try to divine what effect they're meant to have.

REWATCHABILITY: Medium-High - A throwback to Season 1, but that's in no way a complaint. The moral ambiguity of the whole situation is a highlight.
Millennium