The X-Files #148: The Hand of Saint Sebastian 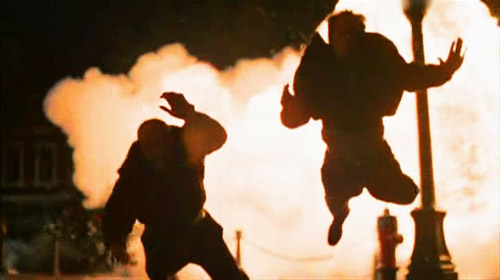 ACTUAL DOCUMENTED ACCOUNT: Watts' obsession with an ancient relic reveals things about the origins of the Millennium Group.

REVIEW: "This is who we are" has been in the opening credits all season, and Peter Watts has used it as a ready-made justification for the Millennium Group's decisions, but this is really the first episode where it becomes clear it is the Group's motto. That's fine, and Watts turning it into a question provides a nice hook. It does draw attention to itself however that suddenly, Group members are using it as a pass phrase or salutation. Are we to believe they just started doing it? Because the flashback to 998 A.D. - the turn of the FIRST Millennium - also uses it. All part of the Morgan/Wong retcon. Moving forward, the episode increases the scope of the show a great deal, both temporally (scenes from 1000 years ago) and spatially (the German setting), but even more than that, the Group gains a recognizable leader AND a nemesis group.

The episode might dazzle with its many guest-stars, but not with its handling of guest characters per se. Philip Baker Hall as the Millennium Group lead is a real coup, but he seems to deal exclusively in parables. Hopefully, his future contributions will be less enigmatic. I'd love to see him play a larger role. CCH Pounder is back with Andrews, the forensic pathologist, but she's already revealed as a traitor, probably killing her chances of ever showing up again. Without really knowing what the nemesis group wants (or, in fact, what the Millennium Group does), it's hard to gauge that betrayal; it feels a little empty. But the biggest faux pas is the inclusion of both Brian Roedecker, the Charlton Heston-fixated computer nerd, and the character of Detective Heim who keeps quoting American television police detectives. It's the same kind of joke! And not funny! In Heim's case, it really does make the German police seem silly and incompetent. And then there's the scientist studying the bog mummy, who has an interest in pornography and phone sex, another unfunny bit that's entirely too important to the plot.

But the main thrust of The Hand of Saint Sebastian is an effective conspiracy thriller, with car bombs and quicksand, brutal murders, friends standing on the edge of right and wrong, and allies turning into foes. The archaeological angle made me think of the later Alias TV show, though it's not clear to me if the show will actually head in that direction. Is the fabled Hand going to be used? Are there other weapons out there to help fight the apocalypse? Will this become a regular thing for our heroes? And come to think of it, what happened in the year 1000? Was there a similar struggle, and what does it say about the one less than 800 days in the characters' future? A lot of interesting hooks, I just don't know if they'll be resolved.

REWATCHABILITY: Medium - Opening up the world of Millennium is a worthy goal, I just don't like what's being done with many of the characters.
Millennium