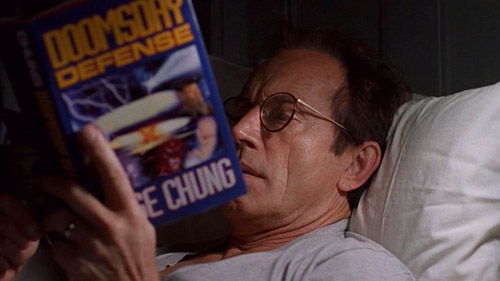 REVIEW: Darin Morgan's back! His work probably doesn't belong on Millennium, but I'm not sure I care! It's not that he's subversive, or even that he's funny, really. It's that he always has something to say about the show's he's writing for. This episode of course has the take-down of the program's clichés you're expecting, but it's also a profound joke about the cyclical nature of the apocalyptic Ouroboros. The snake that eats its own tail becomes a symbol for, well, wank. There's a reason the self-centered, happiness-begets-itself, Scientology clone Selphosophy has a self-proclaimed god called Onan Goopta (in addition to mirroring José Chung's multicultural moniker) - onanism is the act of wasting one's seed. Masturbatory humor abounds early on so you make the connection, and once made, it's everywhere. After all, we have a writer whose story becomes true, and who admits to having created the "god" whose faithful are now after him. He created his own future. Which certainly doesn't diminish his narcissism. And though he's the only GOOD author in the story, there are others, and at certain points, you're no longer sure who's writing about whom, crossing timelines in an amusing way. (Even Geibelhouse has "creative theories", though Chung is definitely cast in the Castle role.)

The parodic take-out takes many forms, though the most overt has an upbeat blond Frank analog taking charge in the Selfosophist's novel. Given that normally, Frank is such a "dark" character, he doesn't coexist very well with comedy - still a problem in this episode, no matter how much I enjoyed myself - giving Lance Henrikson this material is ballsy indeed. Just the phrase "don't be dark" and Chung's musings on the absurdity of life, a ridiculousness to be found in even the most serious of television, is meant as commentary on the show's tropes. These events are triggered by a blasphemous story that angered a group of people, and perhaps Morgan hopes to cause the same ripple in Millennium fandom. And then there's the question of whether or not this show takes place in the same universe as The X-Files. José Chung's existence is, of course, damning evidence that it does no matter what was originally intended. And yet, the stand-in for Scientologist Tom Cruise found happiness with a sexy model apparently played by... David Duchovny! So does that mean these are two separate universes, both of which have a José Chung? Darin Morgan plays coy, because he senses the program has always done so as well.

As a serial murder mystery, it has its moments as well. The bit about a man's books saying more about him than anything. Geibelhouse a sponge who becomes a better "profiler" as the episode moves forward. The thing with the three Antichrists and the possibility that a killer would simply misinterpret Nostradamus, or in an incidental elan of Selphosophy, make it about himself. The twist with the two killers. And even Chung's death, a dark moment in the midst of all that postmodern humor. That all works quite well.  But is it Millennium?

REWATCHABILITY: Medium-High - Look, if it fit the tone of Millennium, I'd go with a High. That I nevertheless enjoyed enough for the next best rating is proof that such an episode can still work if you don't take it too seriously (and yet, just seriously enough).
Millennium