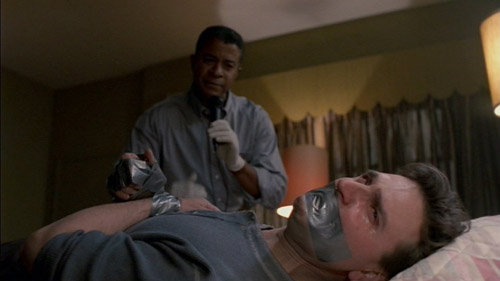 ACTUAL DOCUMENTED ACCOUNT: Frank Black and Lara Means encounter a series of murders committed under the guise of euthanasia.

REVIEW: Was this written in the midst of the assisted suicide debate? Sure feels like it, and mostly succeeds by not really taking sides. In fact, our heroes (in this case Frank and Lara, and seeing the killer is played by Tucker Smallwood, it's kind of a Space Above and Beyond reunion) aren't even privy to as much information as the audience is, and remain ambivalent. They're not able to tell if "Steven Kiley" is an agent of "Heaven" or "Hell". Not that we're necessarily equipped to evaluate him ourselves; it can't even come down to what you think about suicide (assisted or not), because Kiley has a strange pathology akin to the fetishism of the serial killer. Even if you agree with what he's doing - taking the pain of terminal patients away - do you agree with his REASONS for doing so? Is he helping, or rather satisfying some sick compulsion?

It all seems very suspicious and crazy at first. Karaoke songs, duct tape, walnuts... And so, like Frank and Lara, we're led down the path of thinking it isn't even suicide. It's murder. By the end, we're shown a full session - a group suicide, no less - and find the patients were willing and complicit in the whole ritual. It really was a nice and meaningful way to go for them, and they were at peace; the lady with terminal cancer was even able to joke about it on her answering machine. Kiley's fixation with terminal illness provides succor, not malaise. And he's dying too; it's a holy mission for him before time runs out. So are we okay with what he's doing if it's NOT murder? Well, where do you stand on euthanasia? What about in cases where the patients were still quite able-bodied (like the bartender)? Easy answers aren't forthcoming.

As a mystery, it's a throwback to Season 1, though also to the X-Files. Lara will always feel like a Scully to me - probably because of her acid wit (calling Frank on his obvious depression takes balls) - and a man who can "see" the illness in others is a concept already done on the parent program. None of this is to the show's detriment, mind you, though I did find some elements of the investigation a bit redundant. In particular, when Kiley recounts his secret origin, it's all stuff Frank told us first, and he got it a bit TOO right. And there's the idea of using upbeat music as ironic counterpoint to death, in this case better justified than usual, but still a trick both Carter's shows have been known to overuse.

REWATCHABILITY: Medium-High - Not perfect by any means, but it does ask some difficult questions, resisting the urge to moralize or give easy answers.
Millennium

Anonymous said…
I liked this episode a lot; usually when there's a grey-area "villain" they're careful to nudge the viewer one way or another, but this episode stayed right in the middle. Well done!
August 18, 2015 at 3:47 PM