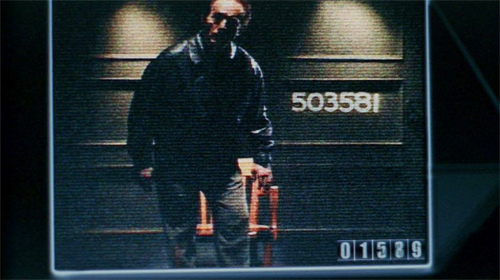 REVIEW: On the one hand, it's a pretty good approximation at what the Internet was like in 1998, give or take some crazy computer puzzles like extracting a .wav from a bit by bit comparison of two pics, stuff like that. And that multi-media room from which Frank is forced to conduct his investigation remotely is the lower-tech equivalent of tons of nerve center HQs we get in movies and TV now all the time. That's pretty cool. But more intriguing still is seeing Frank have to work at a distance and getting frustrated because he can't get anything out of "those wires". Goes perfectly in line with the show's technophobic streak - despite the addition to Roedecker whose shining glory is surely this episode (he's nowhere near as annoying as usual) - with the new Millennium hinted to usher out the technological age. Frank's abilities are too empathic to work well over modem, even though he can work off of photographs well enough. The problem is probably in his attitude - but is that because he belongs to this Millennium, or the next?

Because if evil wins, then we're all going techno. Oops! I think I know how Millennium turns out, guys.

Certainly the possibility exists. The Internet killer, AKA Avatar, AKA (if you like) the Mikado, gets away at the end. He's meant to be an analog of the never-caught Zodiac killer, hailing from San Francisco as well, and making his return on a new medium. Snuff films online, where the number of hits indicates the time of the murder? I'm surprised that doesn't exist in real life (so yes, I'm pretty sure evil won). A chilling concept that proves (in the Millennium universe anyway) humanity's depravity at this time in history, with interesting puzzles, dangerous misleads and traps, and Frank having to vocalize his ability in a way he hasn't before. I think he could have gone a lot creepier with it, but his speaking in the killer's "voice" makes his friends uneasy.

Everything in The Mikado is filtered and at a distance. The killer does his work remotely. People watch remotely. Frank has to work remotely. And even after he finds the killer's lair, Avatar (and that name says it all) is still at some remove, out of Frank's grasp. And interesting metaphor for the Internet age.

REWATCHABILITY: Medium-High - An unusual and topical premise played for everything it's worth, only rarely falling to improbable scenarios à la Hackers.
Millennium

Anonymous said…
Was this the episode where the killer was going to kill once he got a certain number of hits?

The thing I liked was the theme of how we're all willing to contribute to great evil, provided we can say our individual contribution was tiny. We all sell our souls in small ways. And it turns out that's a prophecy that has come true on the Internet, for example how Twitter can be used to harass and destroy lives. Here's a TED Talk about that; take a look at how lives were ruined and compare with "The Mikado":