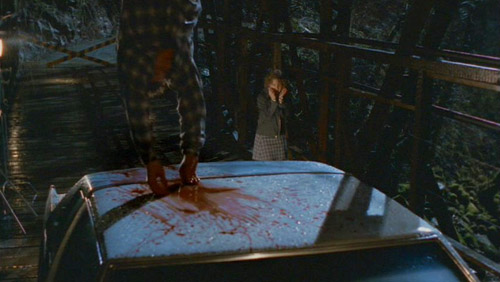 ACTUAL DOCUMENTED ACCOUNT: Urban legend slasher murders are being committed out of an insane asylum.

REVIEW: The Pest House seems unfinished to me, with its pointless urban legend meme, Purdue's initial manipulation of a cutter, the matter-of-fact supernatural powers of the killer, and the way it treats its final crime scene as if the cops weren't going to be called. Even Frank is frequently sketched in, impatient where he should be understanding, and in the end, giving a speech that sounds like Henrikson had fluffed his lines. And yet, the serial killer stuff is atmospheric and suspenseful, with just enough gore to make it a good slasher film tribute.

As variable copycat murders mount around what is basically a liberalized Arkham Asylum, the heroes seem slow to suspect the staff, especially Frank who should recognize one orderly's quasi-religious tone and the patients' accusations that he "stole their dreams" as a tell-tale combo. Of course, we're distracted too. Purdue is a creepy presence who seems to be the culprit early on, or at least manipulating events. And the psychiatrist, played Melinda "Melissa Scully" McGraw, could be one of those "passionate advocates" the show seems to spawn to obstruct Frank's work from time to time (the trope is better written than usual, but not overwhelmingly so), or be conducting sinister experiments that have let these murderers loose. There's also a vague theme about the interchangeability of doctors and patients going on, which resonates right through to the resolution. But when Edward is revealed as the killer, there's no real surprise there.

As far as explaining his abilities, we could say they're similar to Frank's. Visions intercepted from the evil ether, but more than that, captured and integrated into his self. But what WAS the deal with each murder corresponding to an urban legend? That, more than anything, mystifies and makes me think it was detritus from an early draft.

REWATCHABILITY: Medium - Visually slick and disturbing, but the script has an unfortunate unpolished quality.
Millennium