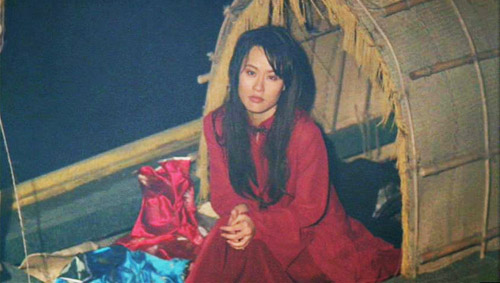 REVIEW: I've accused other Millennium episodes of better fitting the X-Files, but even in Morgan&Wong's much more supernatural season, this one really calls attention to itself. A siren?! Who lures sailors to their deaths? That's a case for Mulder if I ever heard one. Oh sure, they try to make it about the Millennium Group, but that's mostly a misdirect to "seduce" Frank into a catatonic state. When the siren shows Frank/us an alternate reality where he never worked with the Group and lives happily in the Yellow House, it's part of that manipulation. Whether or not Millennium has led to Frank's misery or is actually keeping it at bay is immaterial. The siren is a wicked monster, and for all its rejection of absolutes like good and evil, all it wants is to "feed". Nothing she says can be trusted, which means she's really irrelevant to the greater story.

But she's a little more frustrating than that. For one thing, she allows us to see some of the lighter family moments of old, only to wrench them away (pointlessly I should add, because the Blacks are well on their way to a reunion). What we're left with is an enigma that is more unsatisfying than intriguing. Because we know she won't be seen again. So what was the deal about saving Frank's life? Was Jordan deceived, or did the few minutes of false happiness the "saving"? Did she really show Frank "another path"? Did she really have a life as Tamara Shui Fa Lee, or did she possess this woman? Nothing seems finished or definite. Not to say the actress wasn't perfectly interesting. Vivian Wu does a good job with the material, at once vulnerable and darkly mysterious. The siren's strange effect is built up by the Chinese sailors' varying accounts, and fulfills its promise in her creepy interactions with Frank and others.

But it all still feels like a distraction from what I really want to see - Frank and Catherine getting back together. Here, the case, no matter what I think of it, comes from her and Jordan. Here, we have an awkward meeting between her and Lara Means who's been the show's de facto female lead during the Blacks' estrangement (Lara can't actually replace Catherine, because she's more Frank than Frank, and not complementary to his existence, see quote above). And the real Catherine reiterates the illusory Catherine's claim that Frank as a wife who loves him (as strange and artificial as that mirrored speech is). These are the moments that make me like the episode.

REWATCHABILITY: Medium-Low - While there are some interesting things in Siren, the sum is substantially less than its parts. Comes across as a muddle and a script handed in to the wrong Chris Carter show.
Millennium

Anonymous said…
Years after first watching this episode I was fascinated to learn that exposure victims can/do experience visual and auditory hallucinations.
August 24, 2015 at 6:00 PM