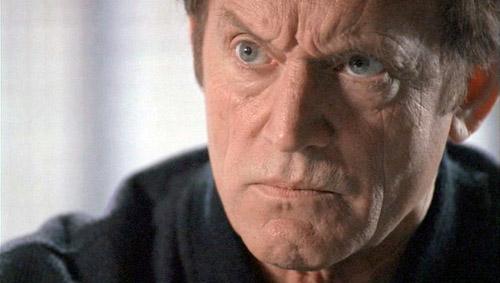 REVIEW: The prison story tends to melodrama, but in the end manages to be both tragic and touching. And it's true that Millennium has seldom dealt with the female criminal mind, so that's a change of pace in and of itself. In Sonny, we have a woman prone to fits of rage, but she feels no need to hurt others (she bashes at the ground next to Frank, for example), not unless they are trying to hurt her loved ones. In this case, that's Janette, a young woman who doesn't know she was raped by a guard while unconscious, and believes she is having a "virgin birth". While they are dangerous, neither is a killer (at least, until these events unfold); they are, in fact, religious, and need to break out to make sure the baby goes to the right people. Tragedy has followed these women all their lives, and continues to do so, largely because they don't know as much as other characters do, and they endanger themselves and the baby through their own mistakes. Ultimately, Frank is the one sympathetic person in their world - we know how the concept of family drives him - but even his intervention isn't enough to save them, only their child. They follow each other into the afterlife, and their love, even more than the fulfillment of their quest, redeems them. Sonny dies on her knees, as if in prayer.

Unfortunately, the proceedings are skunked by the script's insistence that everyone BUT Frank and Watts be stupid and corrupt. The guards in that prison are only in it for the sexy inmates. Law enforcement guys all want to shoot first and ask questions later, going so far as to fire at civilians. They go in with guns blazing no matter what, then wonder why the Millennium Group isn't feeding them their leads. It's like they need for this women to die, pregnancy or no pregnancy, to make sure those low-life guards don't lose their jobs. We're used to obstructionist cops, but the trope is way overused here, and just makes Idaho look bad. And it's not just them. The clinic where Sonny and Janette get the baby checked out also makes mistakes like talking to the latter about the rape - how did the nurse even KNOW?! - creating a difficult situation for hostage Frank. The case is too easy for Millennium (really, it's not that hard to get the leads they do), so let's just throw every possible impediment at them, no matter how much character assassination we have to commit.

It's interesting, of course, that the baby DOES turn out to be a virgin birth (or at least, not a child of rape). We've seen this all season. Agents of both the Devil AND God are being sent to Earth. People important to the new order, currently children, are being protected by religious zealots and/or a supernatural force (Janette is saved from a bullet by a single metal badge). Were the architects of the Renaissance ALSO virgin births and miraculous survivors? Or have we been living through a millennium of evil without knowing it? I don't know my History of the Saints to know how many were born of each millennium. Maybe there's never been a good millennium. Anyway, if Janette's child has any chance, it'll be with a religious couple that was praying for its mothers. That's fine. I just wish they weren't sketched in as providers of platitudes in the epilogue.

REWATCHABILITY: Medium - A sweet and tragic Thelma & Louise story is undermined by the script's inability to paint any other convincing characters.
Millennium