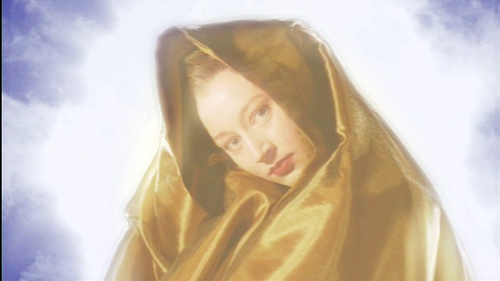 ACTUAL DOCUMENTED ACCOUNT: Catherine and Lara investigate a girl who seems to channel the Madonna.

REVIEW: Anamnesis is unusual in many ways, including its structure which includes a terrifically cinematic teaser occurring two days into the future, the biggest is that it doesn't feature Frank Black. Instead Catherine and Lara Means share the screen as a kind of Scully & Mulder unbeliever/believer pair. It's been too long since Catherine got her own story (though the ideal is to not separate her and Frank) and she shines thanks to her empathy and her ability to approach people. It's probably Lara's best episode too, a case that's very close to her (she was a visionary girl too) and overwhelming her with emotion and doubt about Millennium's game plan. When she's assisting Frank, they're two of the same, really. With Catherine, she's a contrast, and someone who can tell her how isolating and destructive the visions can be, in a way Frank would probably never share. Lara's message for Catherine is that Frank needs his wife lest he be lost.

You'd think that a "change of pace" episode wouldn't also throw out big revelations about Millennium's history, but you'd be wrong. Meet the Family, the (Merovingian) Christ's bloodline/the Holy Grail (as per Holy Blood, Holy Grail, or if you prefer but we can't be friends if you do, Da Vinci's Code) who once worked with the Group, but have since parted ways. One of their number is posing as a creepy drama teacher fostering the visionary girl the Gnostic Madonna can speak through (that's the Magdalene, not Jesus' mom). Genetically transmitted knowledge (we've seen it before on The X-Files), or a spirit communicating from the other side? The DNA match seems proof of the former, though they do have to stop casting blonds to act as direct descendants of Middle Easterners, even with millennia in between. A minor quibble in the context of a story in which the Family's agenda isn't necessarily made clear, nor why they are at odds with Millennium. The implication is that Clare will be mother to the Second Coming, and already knows her burden and feels sympathy for the Mary of the Gospels who birthed the First. But there's plenty of doubt seeded throughout to keep us and Catherine guessing, from Clare's ability to memorize lies (go go Gnostic apocrypha!) and the super-cheesy shared hallucination of the Madonna in church.

So is the Gnostic apocalypse/new cycle so bad that Millennium wants to keep the Family from Clare? Or is it rather that a blood sacrifice (and a HOLY blood sacrifice at that) was needed and it was the Family guy's fate to die in Clare's stead? The brief shot of another man with a Family book at the end may indicate Clare will find another mentor soon. The episode is rather cagey about it all, but the audience is more than able to draw these conclusions for itself. Catherine navigates all this well enough, and is confronted with the supernatural just enough that she can't stay Scully for long. One mystery persists and that's the Polaroid killer's connection to all this - he too quoted from Gnostic text. This is a highly religious story, of course, and the featured town has some very devout people inhabiting it, though I'm don't recognize the denomination... they believe in the Virgin Mary, but the priest is married and has a son, and practices RE-baptisms? I thought they were Catholic until these anomalies popped up.

REWATCHABILITY: High - Would that all changes of pace feel so important! Strong direction too, and while I haven't always been a supporter of Lara Means', I love her here. A bad special effect and a few odd details do not detract from my enjoyment to lower the score.
Millennium

Jeffrywith1e said…
I love this episode. The Patti Smith's Dancing Barefoot is so masterfully interwoven into it that the song will forever take me to this show. I loved it.
August 26, 2015 at 11:52 PM