August 27, 2015
"The first thing we're going to do when we get out of here is break every single CD that has that song on it." 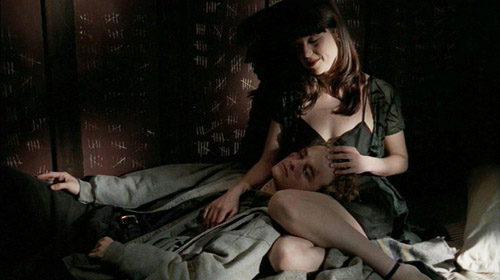 REVIEW: Millennium doesn't like giving easy answers, so you sort of have to decipher what the villains' (or even angels') agendas are supposed to be. In this case, Lucy Butler and her pawn, the world's worst guidance counselor ("You won't amount to anything!"), are kidnapping youths with potential (but little opportunity) and making sure they have ordinary lives. This, through a traumatic and even violent reprogramming that involves a creepy house lined with cells and a steady stream of "Love is Blue" on the P.A. system. So what IS the game plan? Season 2's interest in the post-Millennium event world makes me think Lucy is removing potential spoilers to the Devil's proposed world order. Watts makes a speech about great men who were considered losers until greatness was thrust upon them, which would indicate that's what these kids are, or could be, if only we could see the future. Lucy not only poisons their futures, but enslaves them to her will, so it may also (instead?) be a case of creating a subservient army (she makes one kid betray another, which seems like a classic cult indoctrination technique).

Regardless of her intent, and though I'm happy to see her again, I do wonder whether it was necessary to give her supernatural agency. The show's always flashed on evil people as if they were demons, and her murder of Bletcher (if it was her, but here Frank is convinced) provided such flashes. The death by fright of an 18-year-old in this episode goes one step further, and then there's the evidence that she's 100 years old, that she used to be a girl named Anne who disappeared in 1911, or else is a creature now using that girl's form. While making her a powerful agent of the Devil could be interesting, and perhaps explain her strange wedding to a serial killer, in the context of this episode, I think it's too much. I would love to think the kids can't escape her because of her supreme confidence and manipulations, not because she somehow has supernatural senses, strength and luck. That strong teenage boys succumb to this small woman just because of her evil charisma is a more powerful image if she doesn't have infernal help.

The supernaturalism extends to the investigation itself, where Frank simply "senses" her presence, with not even a pretense of detective work. That also weakens the drama and the sense of revelation. At least the guidance counselor is a human villain, and that part of it, at least, works. But a lot of the drive comes from that magical insight and so is a fruit of the poison tree. I like where they go with it (give or take a particularly maggoty corpse), but the script could have found a better way to get us there.