August 28, 2015
"What evil genius invented the alarm clock? No other creature but man could concoct a device that interrupts, on a daily basis, their only state of natural happiness. No doubt, the evil genius' evil twin contributed the snooze button." 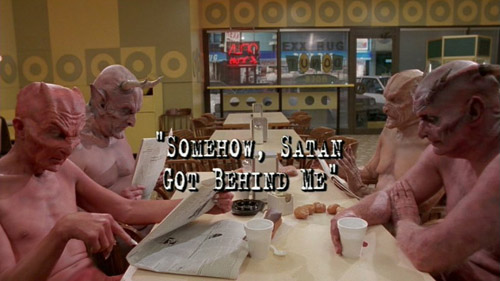 REVIEW: I really love Darin Morgan's offbeat comedy episodes, but this, his last in the X-Files family, kept me at arm's length. I really think it's because the demons look like Buffy/Angel's, and are treated much the same way. What they have to say is funny, even insightful, and Morgan's take on evil is amusingly subversive, but it just doesn't fit the world of Millennium, you know? It's not just that we've never seen demons head on like this, but that apparently, Frank does. It flies in the face of the way his powers have always been shown. So while "evil" is a force, and characters like Lucy Butler have been linked to demonic entities and may, indeed, be infernal, showing us four ordinary demon Joes like this robs the whole series of its ambiguity and makes its mysteries seem mundane. That's an old Morgan trick, but it usually succeeds better.

Outside the context of Millennium's usual fare, it's actually a pretty fun quartet of stories, showing different kinds of evil/damnation. There's the serial murderer type we're used to seeing on the show, the sins of indolence, the crass evils of television, and... well I'll keep the last one for the end. In the first three stories, the victims are made caricatures by the telling. I suppose it's the demons' disrespect for humanity that makes them imagine humans as cartoons, but is it funny? The first story is the closest to reality, and ends in a properly ironic twist. The second is wry satire. The third spoofs Fox and the X-Files itself, but features obnoxious slapstick. I mean, I like the censored strip show (though Morgan likes to go to this locale a bit too much) and the parody of Fox's "When animals attack" programming, but the dark comedy of an X-Files set being used for a deadpan snuff film made me smirk more than smile. Morgan loves to toy with the audience and show them that, surely, Millennium and The X-Files can't take place in the same universe, which is the point of the spoof, as well as of the casting of Scully's mom as an aging stripper in the final story.

All the demons have their own personalities and techniques, which is rather good, but the fourth demon is my favorite. He has such pathos! And yet, it's a subverted pathos because you think at first that he's telling the story of a demon who fell in love with a human woman. It's very sweet. And even when he breaks her heart and leaves her, you're still thinking "he has to because he knows they can't actually be together" and that it hurts him more than it does her. But no, it was his plan all along. This is how he breeds despair. And the pathos is suddenly about how he was actually afraid he might care for a human, and have lost himself, and then how lonely his existence is. Frank's remark, while completely out of character (he's never held discussions with devils before), cuts him to the bone. And you're left caring about this guy, even though he's as evil as the bad newspaper delivery man or the late night telemarketer.

REWATCHABILITY: Medium - It's fun, it has something to say about the nature of evil, but it just doesn't fit the world of Millennium well at all. As a lost episode of Angel however...
Millennium

Timothy S. Brannan said…
I agree. This one is such an odd-duck episode but yet I found myself really enjoying it.
August 28, 2015 at 8:35 AM

Anonymous said…
Personally, I rate the rewatchability of this one as "Infinite". It's not standard "Millennium" fare, it doesn't fit the tone, but bear in mind I've been losing faith in "Millennium" by this point in the series. If they're going to have demons responsible for (some of) the evil in the world, then it follows that we might see some of them.

That last demon, I think, had something to do with the metaphysical impossibility of pure evil: pure evil must be destructive to all things, even itself, therefore nothing that exists can be pure evil. Which leads to the possibility of demons actually wanting love and comfort. I don't think his leaving her was part of his plan, it had more to do with his self-image (cruel and unloving) coming into conflict with what he actually wanted (love from this one woman). And that's how he made hell for himself when he could have paradise.
August 28, 2015 at 9:35 AM

Siskoid said…
The last story is definitely the best and the most ambiguous. I love it to bits. Unfortunately, I don't rate the first three as highly. Amusing, but nowhere near this level of craft.
August 28, 2015 at 9:48 AM

Anonymous said…
You may or may not recall the dancing baby that Ally McBeal was seeing a lot at the time, to an irritating level of cultural saturation:

Siskoid said…
Ah yes! I knew that was a reference to something, I just couldn't remember what exactly. Totally a dig at Ally McBeal!

Anonymous said…
To me the joke is eternally fresh because of that damn dancing baby. There was no escaping it. Even check out the page from "DC 2000" where the WWII-era JSA get their hands on a laptop from the future:

Side note, the Seven Hells! blog is publishing new content these days -- irregularly, but it's still new content, and Devon remains The Man.
August 28, 2015 at 10:58 AM

snell said…
The difficulty with D. Morgan's Millennium episodes is that the damned show never firmly decided what it wanted to be, and therefore was a moving target that was perhaps too difficult to successfully engage with self-parody. The X-Files was firmly settled into it's groove by Season 3, and it was easy for Morgan to poke at it's tropes. Millennium? It never really settled, due to direction changes & producer changes. Harder to self-mock...
August 29, 2015 at 9:30 AM