The X-Files #162: The Fourth Horseman

August 29, 2015
"So I looked, and behold, a pale horse. And the name of him who sat on it was death, and Hell followed with him. And power was given to them over the fourth of the Earth, to kill with sword, with hunger, with death... and by the beasts of the earth." - Revelation 6:8 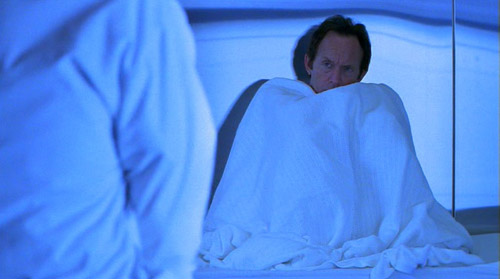 ACTUAL DOCUMENTED ACCOUNT: As a super-Ebola plague pops up, Frank starts investigating the Millennium Group itself.

REVIEW: Regardless of the plot/threat, the episode is really about faith. It's Watts the believer vs. Frank the unbeliever. To reinforce Watts' position, we flash back to that horrifying story about the dead baby during his FBI days, to his recruitment by the Millennium Group, and his initiation to its deeper mysteries by the side of a river, one of the episode's recurring motifs. We also see what awaits Frank and Lara, but the former rejects all that as cult behavior. Lara, on the other hand, has disappeared and turns up at an initiation. From then on, she's the Group's mouthpiece. But has she been brainwashed, or is she truly illuminated? After all, she had doubts similar to Frank's. Frank actually goes so far as to join a private security firm - but are they conducting their own seduction of him? - to spy on Millennium. In the end, Watts is torn between his friend and the Group, between his faith and the fear of having his faith tested by Frank's questions.

Because unless he's faking it, the Millennium Group HAS lied to Watts as well. While in quarantine, they were vaccinated against the super-Ebola without their knowledge. Though the revelations are coming faster and more focused than the parent show's, this all feels very X-Files. How far are we from the black oil cure that will allow the Syndicate to survive the alien invasion unmolested? It's the same idea in different clothes. Frank comes by this information by running his own secret tests, and it seems damning proof that Millennium is up to no good, but is he ready to discover the opposite to be true? Watts' earthquake "prophecy" comes true, so is there REALLY a coming apocalypse? And if proven wrong, is he ready to stick by Millennium, even if it means further alienation from his family and breaking his promise to Catherine? Both men are in similar circumstances. If either is proven wrong, his whole world collapses.

But then, it seems bent on collapsing all on its own. Patient Zero, as it were, is bird kind (conflating two newsworthy pandemics from the late 90s - avian influenza and Ebola). Various birds are winding up dead, and the humans affected seem to be those who have eaten infected eggs or chicken meat. Over and over again, the episode contrasts human routine with horrible, blood-drenched deaths (the Mother's Day dinner in disturbingly gory at times), reminding us we're not ready for something like this, that our everyday habits will end up killing us. Is this the way the world ends? A fast-acting plague would leave the world in the sudden grip of Nature, which the show has been continuously touting as the probably next cycle.

THE TRUTH IS OUT THERE: What does Jordan's dream mean? Is the Black family left alive after the blood apocalypse because Frank has been vaccinated, and does his father's ghost chase Catherine because she eventually dies? Or is her remoteness due to the other two's alienating visions? With the jungle and the monkeys (and even the cabin) we once again tap into a new order ruled by Nature.

REWATCHABILITY: High - Big happenings for Frank and his crew, and some pretty solid body horror too. I'm left wondering what they're setting up for Season 3, and I think that's a good thing.
Millennium