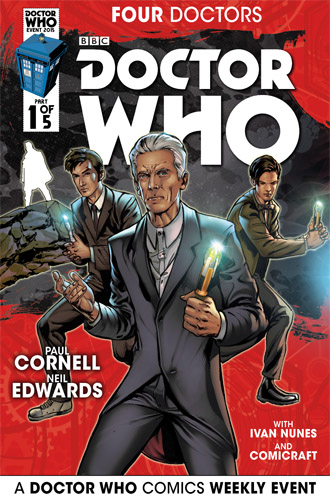 I'm still on Titan Books' mailing list, and they've been kind enough to send me an advance preview of their Four Doctors mini-series which comes out TODAY. Hopefully, you don't think your Doctor Who comics dollar/pound is already stretched to its limit, because this is a 5-part WEEKLY.

"Four Doctors" (Week 1)
Writer: Paul Cornell (one of my favorite Doctor Who authors, across all media, and a really nice guy to boot)
Artist: Neil Edwards (he's worked on a number of Marvel and DC projects over the last few years)

Obviously, this is a multi-Doctor story, which is always an exciting prospect, but due to production challenges, usually struggles in execution. For comics, that means finding an artist that is good with all the likenesses involved, and while Edwards' Tenth Doctor is strong, and his Eleventh pretty good, he doesn't quite have a handle on Twelfth/Capaldi (fairly cute Clara though). He's a bit splash-happy for my tastes as well. However, his science-fiction designs really shine, and he's good with expressions and body language.

I'm more of a writing guy, anyway, and Cornell definitely gets what makes each Doctor's voice distinctive - Ten's enthusiasm, Eleven's awkwardness, the current Doctor's entrenched inability to recognize faces... But wait, I haven't mentioned the fourth (not-capitalized) Doctor in this story. It's not the Ninth, but rather the War Doctor! Yes, the main attraction here is that the series serves as a window into the Time War. It's not clear whether the War Doc will be allowed to interact with his three future selves or if his story serves as prequel to what the trio will have to deal with (either way, no worries, Doctors don't and can't remember such meetings later), but Cornell goes right back to Doctor Who's first season in 1963 and revisits Marinus and the Voord (squeeee!), and rather intriguingly exposes the politics of the Time War. It's a whole era of Who "history" that's been left relatively unexplored and here we have a writer who's always been adept at playing with the full range of toys available. In a way, I'm sorry to move "ahead" to the other Doctors meeting in 1923 Paris. 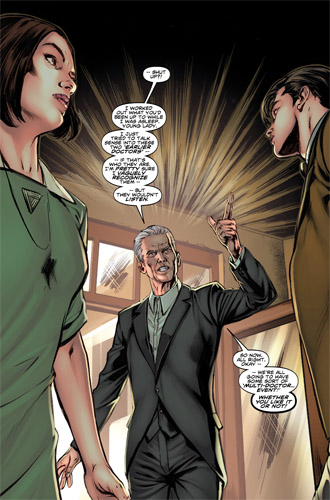 Now, this series DOES take place in the timelines created for Titan's comics. While the current Doctor is traveling with Clara Oswald, TV fans won't recognize the other companions. Don't worry, a quick recap brings you up to date with Gabby Gonzalez (the Brooklyn artist paired with Doc10 after The Next Doctor) and Alice Obiefune (the library assistant who traveled with Doc11 in between Amy Pond and Clara). I don't think it should be a problem for new readers, and might even serve as a gateway into Titan's other books. And Cornell seems intent on making it an epic, timey-wimey adventure with winks to continuity for Whovians of all ages.

I say check it out.
Comics Doctor Who

Andrew Gilbertson said…
Anything that references Marinus gets a thumbs-up in my book. Might have to check it out. Especially since I was SEVERELY underwhelmed by the portrayal of the Time War in Day of the Doctor; hopefully,t his one will match the RTD-era statements about it a bit better.

Siskoid said…
Well, we're still in margins of the Time War, not the explosive Grant Morison-type Temporal Armageddon stuff alluded to on the show, but it's still interesting.
August 12, 2015 at 5:48 PM