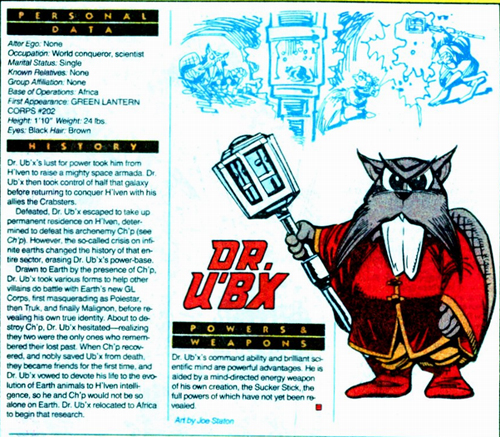 The facts: Named after Disney animator Ub Iwerks, and designed to be Green Lantern Ch'p's archenemy, Dr. Ub'x is, yes, ok, let's say it, an evil space beaver. Laugh it up. You done? Ok. Because aside from that, when you read his Who's Who entry, he seems quite the accomplished supervillain! He once ruled half a galaxy which he took by force! And he must've been important despite our not noticing because he remembers the Crisis (which undid his empire), and only the most powerful of beings remember their former time lines (which I'd love to have been the Zoo Crew's, they just never traveled that far into space). By the time we actually meet him, Crisis is already done with him. That would be Green Lantern Corps #201 (in a disguise as Polestar, June 1986), revealing his true form in the next issue. In all, he appeared in two distinct GLC story arcs (#201-205 and #212-216) with an appearance between them (#208). He was last seen in the 58th century taking care of species he had created, and has not appeared since.
How you could have heard of him: If you missed those issues, and Who's Who's '87 Update, it's unlikely. His stories were reprinted in the Tales of the Green Lantern Corps collection Vol.3 in 2010, in the middle of Lantern-mania, however.
Example story: Green Lantern Corps #203 (August 1986) "The Diabolical Doctor Ub'x!" by Steve Englehart, Joe Staton and Mark Farmer 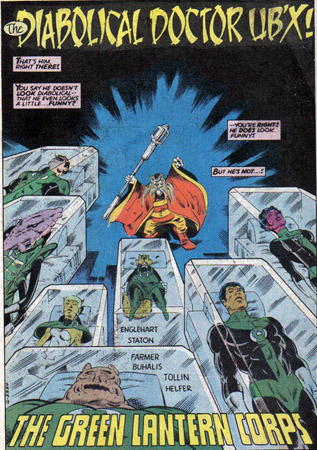 I don't care if you think he looks silly, he's got 7 Green Lanterns down. He's got cred! 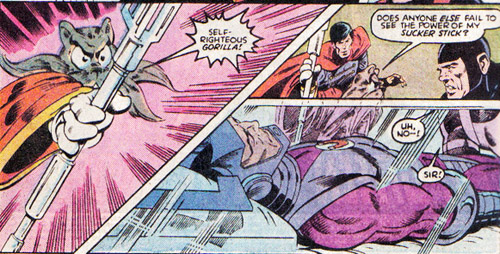 Polaris is without a doubt the most powerful guy there and he gets conked out for back-talking. Okay! So do you believe me now when I say Ub'x has cred?! You better! Arright. Shush. Let's get into his origin, from his own tree-nibbling mouth. Though he was originally from Ch'p's homeworld H'lven, the toothy tyrant decided to leave it for later and returned, in his triumph, to subjugate his home as he had half the (our?) galaxy before. And that's where he met and sentenced to death resistance fighter Ch'p. 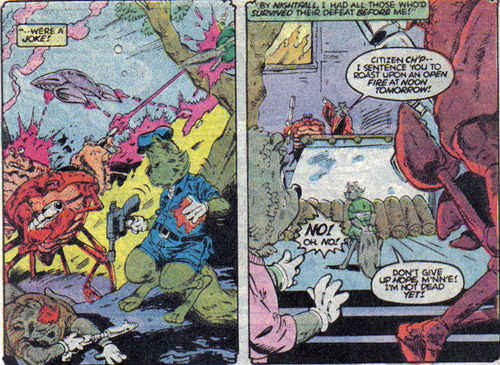 But Ch'p escaped that night after being made a Green Lantern, replacing the raccoon who gave his life trying to stop the invasion. H'lven became Ub'x's Vietnam, with Green Lantern stopping him at every turn. Eventually, Ub'x discovered Ch'p's secret identity and kidnapped his girlfriend M'nn'e, drenched her in honey and sicced some bears on her.

Ch'p to the rescue! And to save his girl's life, the Emerald "Monk" agreed to give Ub'x his ring. Except... 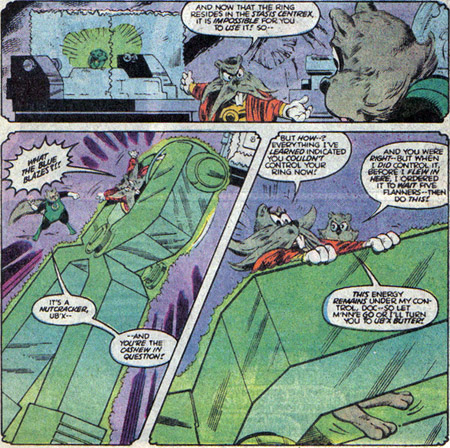 You know, this is really a very good spotlight on Ch'p too! Smart! From that point on, Ub'x would work hard to create a weapon equal or better to the ring, protecting his position with the amassed armies of his empire. 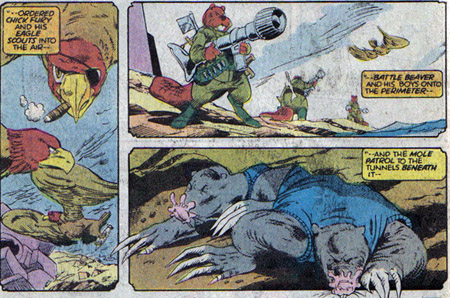 But just as he perfected his all-powerful "sucker stick" (talk to Englehart, I dunno), the Crisis hit and he wasn't able too take the fight back to Green Lantern! Instead, he used the stick's power to survive the changes in the time line that would have otherwise turned him into a regular beaver! 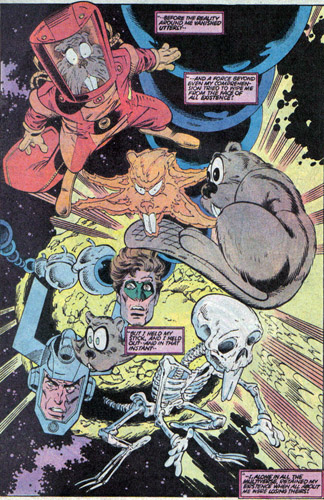 He survived, went to Earth, and now plans to take over the galaxy again. But first, his Green Lantern must die! Or must he? 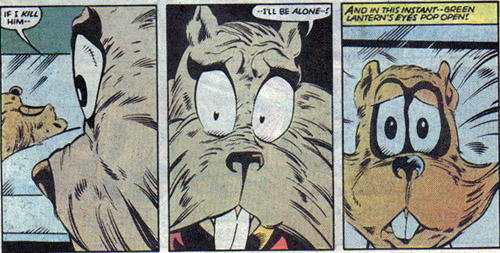 Can he really kill the only person who remembers him, someone who shares the same interrupted history and has lost... everyone and everything? Answer: He can't. His willpower wavers and it allows all 7 GLs to free themselves. He flees. I love how Ch'p insists that Ub'x is HIS problem. It always was. 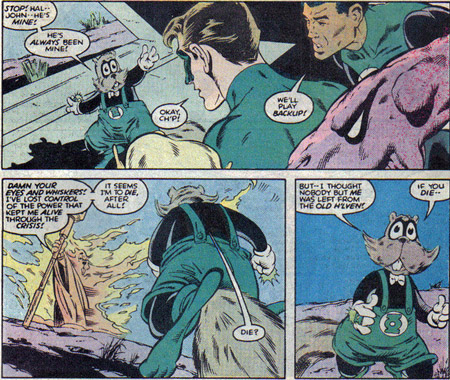 With the stick compromised, Ub'x starts to disappear from the post-Crisis universe. And this time, it's up to Ch'p to decide if he can break his only tie to his former existence. Answer: He can't. 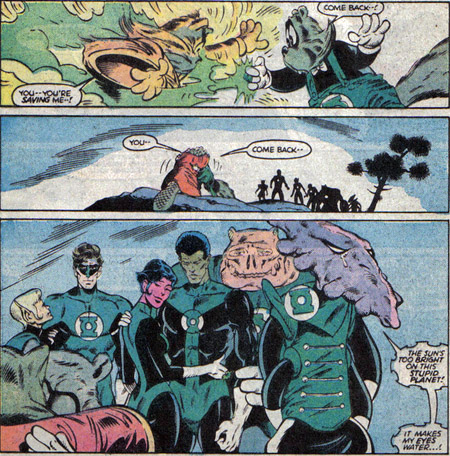 Aww man, you done it now. You made Salaak cry. YOU MADE SALAAK CRY! Uhm... I've got to go in the other room. Personal matter. Hrmf. Back in a second.

Alright. I'm back. I'm okay. You okay? Okay, good. We're all okay. Except Ub'x who hasn't been seen since those appearances. Not even in an Ambush Bug or a Bizarro or a Multiversity comic. Come on DC. Now that you have Canadian superheroes, it's time to put this beaver back on the map.

Who's Next? Well, there's a Golden Age character who didn't show up in the first volume of Who's Who yet was mentioned a heck of a lot. Maybe go back and see what he was all about.
Comics Green Lantern Who's This?

American Hawkman said…
Englehart has pointed out that the "joke" of his funny animal characters was that DC let him get away with some pretty dramatic stuff with them. Treating them as people who just happen to look like Disney characters was the right route. I'll never forget C'hp's attempted suicide in the last arc, or the pathos of him having to decide between Ub'x's new race and the Corps... great stuff.

End question: since Parallax annihilated Ub'x's timeline on panel in Zero Hour, I wonder if he Sucker-Sticked himself yet again, and wants revenge...
August 26, 2015 at 7:50 AM

Siskoid said…
Come on, DC! Rocket Raccoon's popularity has to get at least SOME of these funny animals back on the page! AmHawk is giving you plenty justification!
August 26, 2015 at 8:38 AM

Andrew said…
Named after Ub Iwerks? Should have been a frog.