Who Are the Madmen? 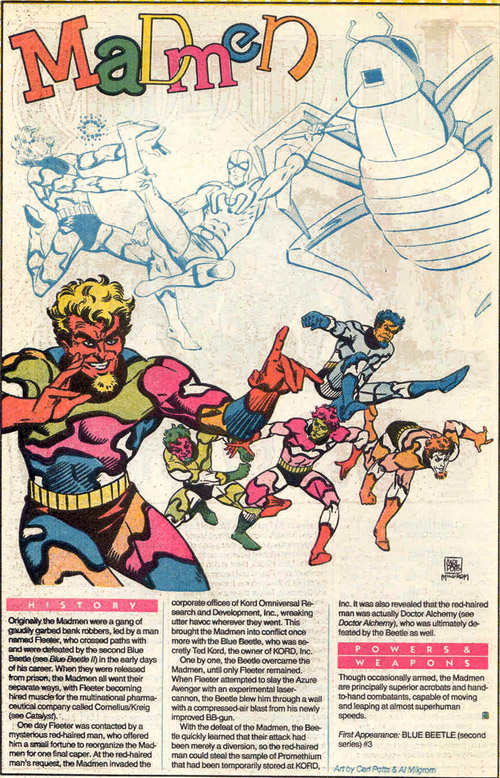 The facts: Though the Who's Who page claims the Madmen first appeared in Blue Beetle's "second series" #3, i.e. the first DC series by that name, that's wrong. They actually appeared in the FIRST series, i.e. the Charlton series, though still in #3 (1967). This I knew when the Madmen made that first DC appearance in 1986 because I happened to own a Modern Comics reprint of the story from 1977 (thanks, local flea market!). You can also infer it from the entry, since it talks about them fighting BB at some point in the past, a past not published by DC Comics. The villains were also briefly featured in 1983's amateurish Americomics Special #1 fighting Charlton's Action Heroes. At DC, their story continued in Blue Beetle #4, and sometime after this issue of Who's Who hit the stands, would appear again in #23, just before the series was cancelled.
How you could have heard of them: From Hawk & Dove #18-19 (1990), Farley Fleeter, the leader of the Madmen, gained the ability to turn people into Madmen with his touch thanks to a pharmaceutical incident. That allowed the Madmen to appear fairly frequently as canon fodder (habitually shot down by heroes and villains alike), appearing in such books as Justice Society of America, Manhunter, Nightwing, Infinite Crisis, Blue Beetle (2006 Jamie series), and others.
Example story: Blue Beetle #3 (Charlton series, 1967) "The Madmen" by Steve Ditko and David Glanzman 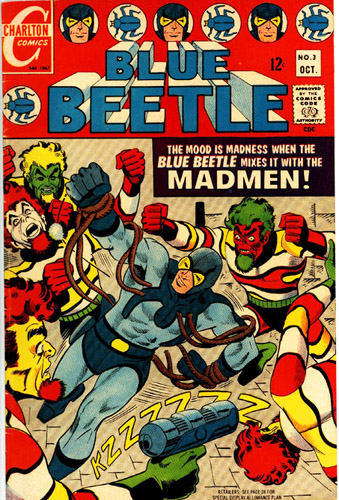 I really wanted to go back to the characters' roots here and check out their first appearance. Hey, vintage Ditko, right? His story takes no time at all to take off, with the Madmen on a rampage and Blue Beetle catching up with them by the third panel. 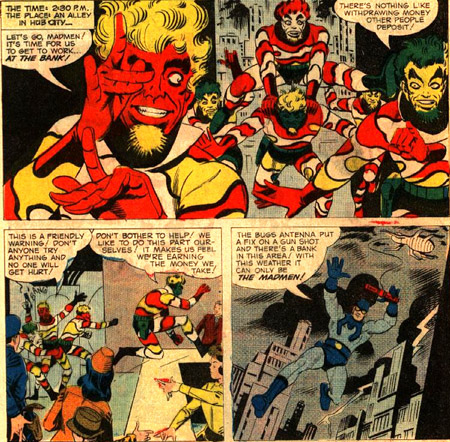 Do the Madmen only go out in gray weather? What an odd comment for the Beetle to make. Whatever. I'm just here to see Ditko's Ted Kord fighting like he's Tony Jaa. 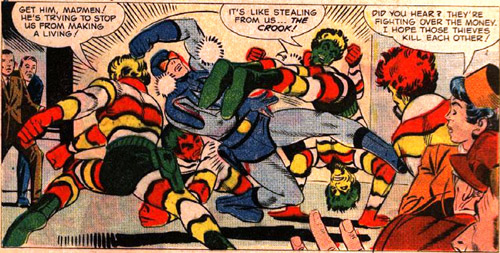 Overwhelmed by the Madmen, they escape with the bank loot AND his trademark B.B. gun! But they can't use it! They only get a hum out of it.

That gives them the idea to hype the gun as the deadliest weapon there is, and convince their victims the hum was some kind of death ray warming up. Soon enough, the citizens of Hub City are talking smack about the Blue Beetle, who really shouldn't be walking around with that kind of unlicensed weapon. Hey, who's the real villain here? Ted tries and tries to get his gun back and these nuts behind bars, but they keep outwitting him:

Truck inside a truck? Didn't see that one coming either. Soon, the city is on the cusp of revolt if something isn't done about that damn menace, the Blue Beetle, who can't keep his toys out of criminals' hands. 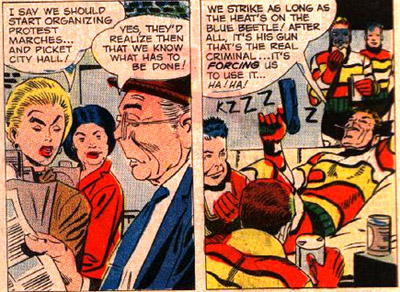 Taking it slower, the Beetle manages to track the Madmen back to their hideout, lands on the roof, setting off the "alarm signal" (uhm, so footsteps?) and allowing the Madmen to capture him and almost unmask him.

Ted Kord is a clever cookie, guys! That's why he's one of my favorite superheroes! He follows up by stumbling into a fire where he burns his bonds off - it helps to have a fireproof costume (TED KORD IS SMART, I TOLD YOU!) and finally gets his hands back on his B.B. gun. Why didn't it work for the Madmen? 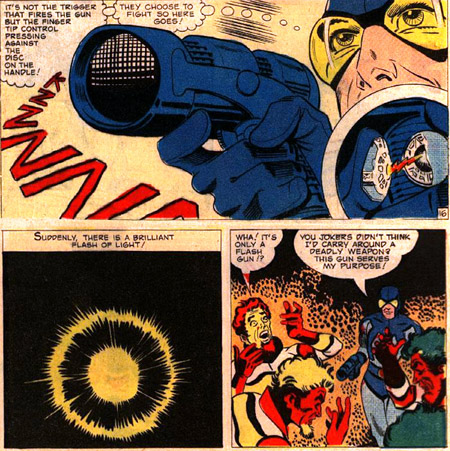 Of course. SMART. So the bad guys are either blinded by the non-death ray flash, or else close their eyes not to get blinded. Either way, the Beetle gets some easy shots at punching their lights out. And if the Charlton Beetle was about anything, it was punching. Lots and lots of punching. In the epilogue, Hub City's citizens are all claiming they trusted in the Blue Beetle all along, blablabla. Good job, sheeple.

Those were simpler days, and the Madmen were perfectly suited to them.

Who's Next? All I can say is that I took your suggestions from last week into account!
Charlton Comics Silver Age Who's This?

Jeremy Patrick said…
I've always had a soft spot for the Madmen, as Blue Beetle was my favourite super hero as a kid (even dressed up for him for Halloween, circa 1988). The news that Blue Beetle and Booster Gold are going to star in the first super hero "buddy cop" movie has me over the moon. Blue and Gold Forever!
September 23, 2015 at 2:23 AM

Siskoid said…
That's commitment! I can only imagine the number of quizzical looks and questions you got.
September 23, 2015 at 8:03 AM

Mr. Morbid's House Of Fun said…
I can this concept receiving a bit of updated darker edge to it, but not too gruesome or over the top. Just really focus on Madman being up to infect others like zombies. Then depending on how long the individuals have been infected that would determine how soon they could return top normal, if at all.

It could be done with being over the top gruesome like DC tends to be these days. Insinuation and what you don't see makes things scarier not just the excessive amount of gore.

Sadly I doubt outside of Convergence and Countdown to Infinite Crisis, we'll ever see these guys again.

BTW, I was down for the BG/BB movie up until they announced that they're using the Jamie Reyes version instead of Ted. It just failed before it started.
September 23, 2015 at 5:44 PM