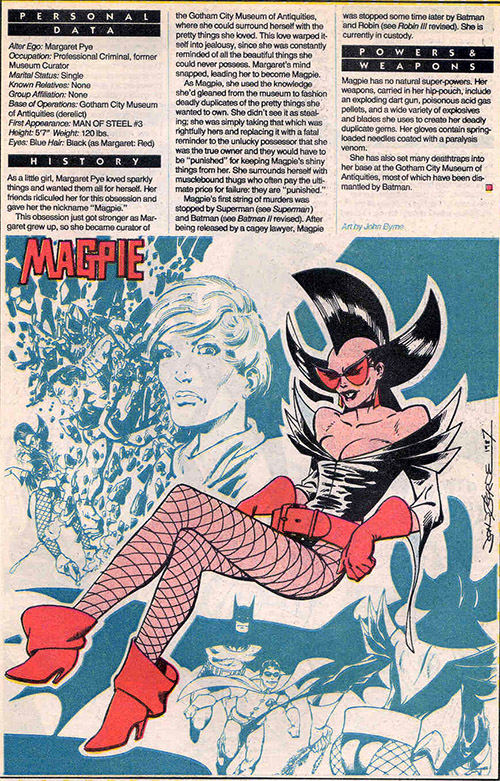 The facts: Created by John Byrne as the first foe of the post-Crisis World's Finest (non)team, Margaret Pye first appeared in the Man of Steel mini-series #3 (1986). She would go on to face Batman once more in Batman #401 that same year. And that's it for the next nine.
How you could have heard of her: In 1995, she appeared in a crowd scene in Underworld Unleashed #1, which suggested Neron would have powered her up. But none of her appearances after that corroborate this idea. Appearing as a non-costumed inmate in Arkham Asylum: Living Hell in 2003 is probably a career high, as she's mostly appeared in cameos (JSA #28, 2001; around the Intergang table in 52 #25, 2006), or as a dead body (she is found dead in Batman #651/Detective #818; then as one of the Black Lanterns in Blackest Night). In the New 52, she's appeared in a couple issues of Batman Eternal (out of costume, as an Arkham inmate), and has appeared in a number of episodes of the Beware the Batman animated series, where she is Margaret Sorrow who has poisonous claws and an inability to feel pain.
Example story: Batman #401 (1986) "A Bird in the Hand..." by Barbara J. Randall and Trevor Von Eeden 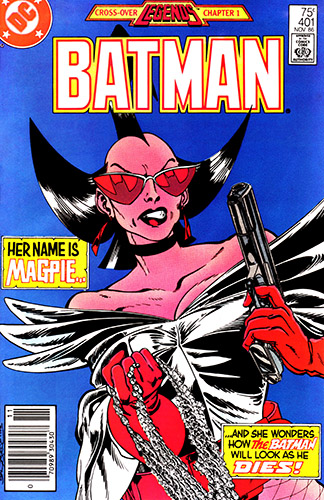 If I was to cover the much-request Magpie, it wouldn't be from her first appearance, which has been collected and made famous by Superman's Byrnification. It would have to be Magpie as a Batman villain. And there's only story like that. This one. It's a story that doesn't seem to know Batman and Superman first encountered Magpie years ago and plays like it just happened despite the fact that Batman has gone from no oval, no Batmobile and no relationship to the GCPD, to yellow oval, Jason Todd Robin and expected meetings with Commissioner Gordon. Gordon waves the World's Finest's statements like they were recently taken, and complains the judge set bail on Magpie and she's out and about. That was one long stint in county!

Regardless of the timeline, Magpie strikes again, stealing a priceless jewel called the Eagle's Heart right off its wearer's throat. So to speak. 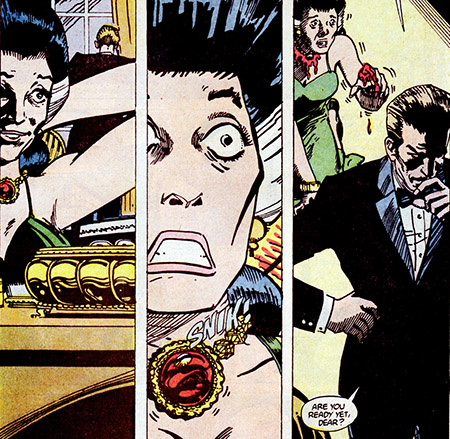 Harsh! Whatever she steals, she replaces with something dangerous... like an open wound! Though Gordon is puzzled, Batman quickly sees the pattern here. She's stolen the Eagle's Heart, the Robin's Egg and an emerald off a Mrs. Turtledove. Birds is the pattern. As you'll see, though this ISN'T years ago, the plot is - gore aside - a lot like something out of Batman '66. Batman has Bruce Wayne set a trap for the GCPD, a party where an undercover cop will wear yet another jewel, the "Falcon's Eye". As the party gets going and Glorious Godfrey starts ranting about superheroes (it's a Legends crossover, see), his gesticulations send drinks flying on Lady Cop's dress. But the server who helps her clean up? Magpie without the tri-hawk wig. 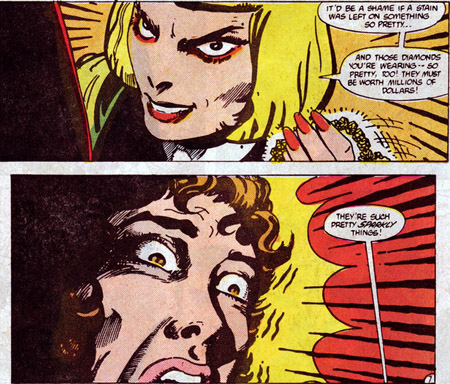 She soon stumbles back into the ballroom with a gas-emitting gem at her throat. After the immediate crisis passes, Batman and Robin follow Magpie's catering truck to her hideout, where she's busy demonstrating her obsession with shiny things. Let's just say it makes her a bit of a clean freak. 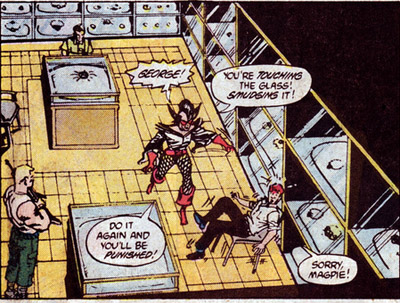 And while she's killed a lot of people, I'm not sure how badass she is if her reaction to seeing the Caped Crusader and Friend is... 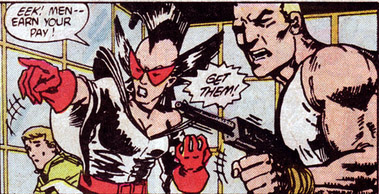 Or is that her Magpie Battle Cry? What ensues is Mags pointing at the Dynamic Duo a lot so her goons will know who to attack. And then Jason Todd shows us just how impractical her very 80s costume really is: 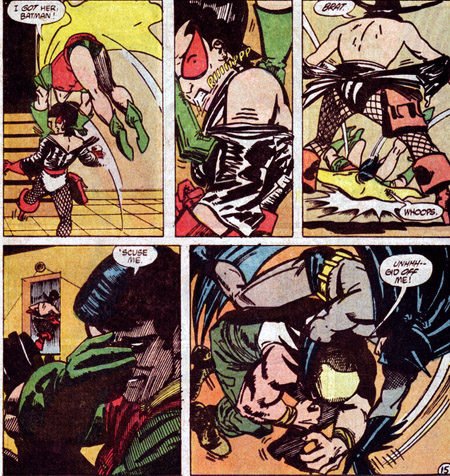 Oops! And even oopser for Jason for whom the sight of a woman's bare breasts is pure kryptonite. She escapes, pulls herself back together, puts the heroes (and her goons) in a death trap, grabs her favorite treasures and then trips! One of her shinies flies under a dresser! 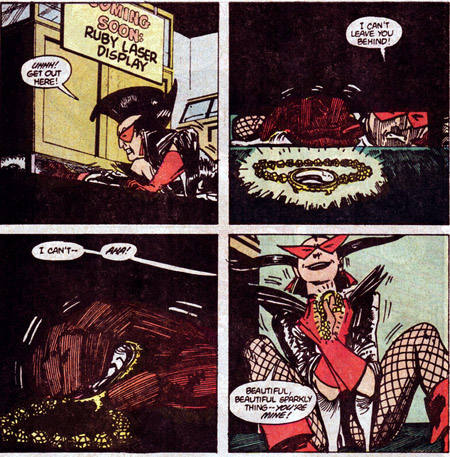 And that's how they catch up to her. Stupid pathology! It's also how Batman disarms her, by shining something bright in her face. That bastard. 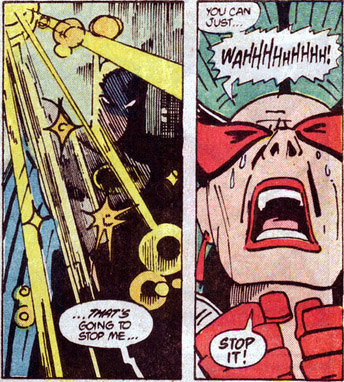 In conclusion, Magpie tells him he's a "horrible man", and he responds that he is what he HAS to be. So dramatic. And Magpie? She went on to a lackluster career as a background character. With such a clear pathology, do you think she should have figured more? Or did the immediately dated costume do her in?

Who's Next? We're going so far back, it won't even be DC Comics anymore...
Batman Comics Who's This?

American Hawkman said…
The fact that she stole the Joker's style for henchmen punishments combined with that costume did her in. She'd have made for an interesting underling for the Penguin, though.
October 1, 2015 at 7:35 AM

American Hawkman said…
He's really the only major Bat villain to not have memorable female underlings, give or take Mr. Freeze. (I personally liked the Riddler's first one from the Question appearance he made, who was infinitely more bloodthirsty and dangerous than he is.)
October 1, 2015 at 7:54 AM

Erich said…
I remember that story...the thing that bothered me was that I could never figure out whether the undercover cop died or survived from Magpie's trick jewel.
October 1, 2015 at 12:10 PM

Mr. Morbid's House Of Fun said…
This is one time I prefer the the animated version to the comics version. The Beware the Batman show made her character more competent and deadlier, so she was a much better opponent for him. But its really hard to believe Byrne created a really crappy and cheesy character, when he's usually criticizing other characters for being lame or derivative.

That Jason scene was amusing though. He was just trying to be modest/polite, but we all know he wanted to stare, and who'd blame him? With an outfit like that, she was kinda asking for it.
October 1, 2015 at 4:36 PM

American Hawkman said…
I think Byrne used a fairly craptacular villain for a reason. The core of the story was Batman vs. Superman... a tough or clever villain drags attention away from that conflict.
October 1, 2015 at 4:55 PM

Siskoid said…
Probably why she expected her goons to do all the fighting, Dale. But AmHawk is right. Magpie wasn't the point of that story. Still... there's really no excuse for that costume.
October 1, 2015 at 6:28 PM

Simon (formerly Johnny Sorrow) said…
Oddly enough, the question of whatever happened to Magpie comes up in the first arc of Jeph Loeb's Batman/Superman, as the eponymous leads discuss her final fate.
October 1, 2015 at 8:39 PM

Toby'c said…
I remember that bit in the Public Enemies movie.

Superman: You know who I was thinking about the other day? Magpie.
Batman: The criminal?
Superman: Do we know another Magpie? What ever happened to her?
Batman: She died.
Superman: No! Are you sure?
Batman: Reasonably.
Superman: Why is it that the good villains never die?
Batman: Clark... what the hell are 'good villains?'
October 1, 2015 at 9:36 PM

Anonymous said…
"I think Byrne used a fairly craptacular villain for a reason."

Heh, funny thing is, I remember DC publishing these full-page ads in the post-Crisis months, something like "The New DC ... nothing can stop us now." And they'd show all their fascinating new characters, and one of the most prominently displayed was ... Magpie. As skeptical as I already was about the post-Crisis world (which at the time felt like a hamfisted attempt to turn it into the Marvel world), Margaret Pye was not really filling me with confidence.

Anyway, given her appearance in those ads, I'm not fully convinced that DC thought Magpie was craptacular at the time.
October 2, 2015 at 4:23 AM

Siskoid said…
I think they were selling Byrne more than Magpie there, but same difference.
October 2, 2015 at 7:48 AM