Doctor Who #962: The Witch's Familiar 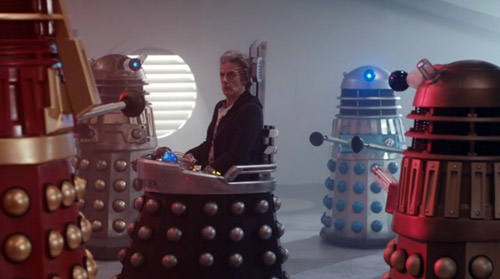 IN THIS ONE... The Doctor and Davros have one last chat while Missy and Clara survive in the Skarosian sewers.

REVIEW: I was hoping for some timey-wimey business, with the Doctor changing Dalek history, the way the cliffhanger was presented, but alas. The episode instead begins with the revelation that Clara and Missy are indeed not dead, but teleported via vortex manipulator at the moment of extermination. Missy tells us how by recounting an untold story of the Doctor where he uses a similar trick, and which could have happened to any incarnation; seeing Doctors 4 and 1 flit about before turning into 12 is one of the episode's great joys (gratuitous, but still a joy). It's not the only one. Two women with a pointy stick against a Dalek city, the Doctor riding Davros' chair menacingly, etc. It's all meant to cover the easy out Moffat's taken on just about every threat (like the TARDIS? HADS). And that includes the whole "Doctor's last will and testament" thing. Well... depends when the Doctor actually started masterminding.

See, while the dying Davros does a good job of painting himself and the Doctor as kindred spirits, old warriors who might have been friends in some other version of history, it's all a trick. He just wants to the Doctor to feel sorry for him, give him a taste of regeneration energy so he can see one last sunset, then take it all to turbo-boost the whole Dalek race. However, the Doctor turns the tables on Davros by channeling the other Scottish Doctor and revealing he knew that was Davros' plan all along, and let it happen to regenerate the decaying Daleks in the sewers so they can start a civil war on Skaro. Or something. The implication is that this was a prepared attack on Skaro, but that doesn't actually make sense - it would mean he manipulated Missy into coming to Skaro which turned out to be a spanner in the works - the more reasonable answer is that he came up with this on the fly, while talking to Davros. Not that that helps. While there are a great many things to like about the first two acts of this episode (Gomez' manic camp performance as Missy not one of them), the third is an illogical mess. Did the Doctor loses some lives when he gave up regeneration energy? Not addressed. How is giving the Daleks any kind of boost a good idea? The last Dalek civil war wasn't good for the rest of the universe either. Clara's words translated as a Dalek is interesting (and a throwback to her first appearance), but their vocabulary seems limited by the script's demands. I'm not sure they've never said "mercy" before, and even if they haven't, the Doctor walking away with child Davros and his brief speech about friend, enemies and mercy feels somehow artificial. And the sonic sunglasses? Part of the Doctor's rock star persona, but I never liked them. Nothing iconic about them.

But there are still a lot of interesting firsts and revelations in The Witch's Familiar. We smile when Davros offers the Doctor the only other chair on Skaro. We're fascinated as the wizened tyrant opens his eyes for the first time. We raise an eyebrow when Missy mentions her daughter. We do learn a great deal about the Daleks, from where they put their dead to why the scream "Exterminate" so damn much. The Doctor has always said they were driven by hate, and it's literally true. Emotion fires the weapon, screaming provides a recharge. The episode also sets us up for the rest of the season, though you don't notice it on the first viewing. The Doctor tells the lie about leaving Gallifrey because he was bored; we will only learn the truth in Heaven Sent. And there's talk of the presumed Time Lord-Dalek hybrid that will bring about Armageddon, and Davros hopes that's what he's creating here. We'll come back to this idea later as well. Missy's clever idea in the final moments, no doubt some kind of takeover of the Dalek race, has yet to come back to haunt us, but seems designed to put all the most annoying Doctor Who enemies in the same basket. Personally? I can wait.

THEORIES: The question of the two-parter's titles... Some have asked, so who's the Apprentice and who's the Familiar, etc.? Well, I suppose the Magician is the Doctor and the Witch is Missy. Clara could be both the Apprentice (as she becomes more and more Doctorish) and the Familiar (paired up with Missy who thinks of companions as pets). Or is Davros the titular Apprentice, since we see him as a child and he must learn a lesson from the Doctor? Visually, there is some of that too. The whole season has an arcing theme of transposition, you see, and that starts with the paired titles (these and those to come). The shifting understanding of what races make up the hybrid, the osmosis between Clara and the Doctor, the whole concept of "Me" as an identity (and as hero/villain), and the many mirrors we will see all season long - Skaro/Gallifrey, Doctor/Missy, Doctor/Davros, Clara/Me, the two TARDISes, same place-different time, humanity/Zygon kind (and the word Inversion in a title), and so on. It all begins here, with these ambiguous titles.

REWATCHABILITY: Medium - Unlike the cup of Skarosian tea, it's hard to accept this episode's resolutions (especially if they mean everything the Doctor and Davros did was a con), but it throws enough cool stuff at you to keep its head above water.
Doctor Who

Toby'c said…
My favourite moments in this one were the Doctor cracking up at Davros's "You are not a good Doctor" joke, and the Doctor's "Your sewers are revolting!", since it's one of my favourite puns in the English language no matter where I hear it.
January 2, 2016 at 9:16 AM