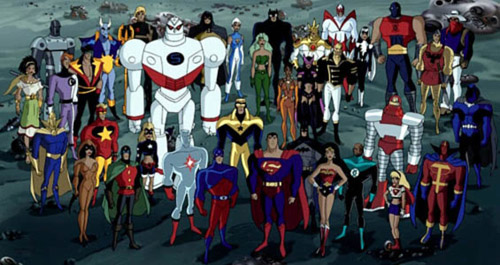 We'll get to a brief review of Bruce Timm's 2-minute pilot for the Batman Animated Series in due course, but first, I want to talk about the daily review project that's going to take up a large chunk of the next year+.

While others have attempted and/or completed full reviews of the Batman Animated Series, or the Superman Animated Series, etc., this will be an attempt at a comprehensive review of the entire DC Animated Universe, including all series that take place in that continuity up to and including DC's tie-in comics series. Every episode and issue will get a review, with 2 or 3-parters to be covered in one go as a single story (basically, if episodes have the same title, followed by "Part X"). We'll be going in chronological (DVD) order, keeping seasons of any given show together, and following each with a batch of comics tie-ins published before the start of the next. So for example, we'll get through the first (massive) season of BTAS, then about a dozen issues of the comic (everything before the first episode of Season 2) and so on.

Not all DC animation is a recognized part of Bruce Timm's core DCAU, so don't expect Teen Titans, Young Justice, The Batman, Brave and the Bold (though I'd want to do this separately at some point), or most of the direct-to-DVD movies. We WILL include BTAS, STAS, and Justice League/JLU, of course, as well as series I have yet to discover like Static Shock, The Zeta Project and Batman Beyond (though not the latter-day comics set on Beyond Earth which do contradict elements from the original animated series). There are several Batman films that do count, and a couple of web series too. Even limited to the strictest of canons, this is a huge enterprise, and I WILL be taking breaks, between seasons, to cover other material on a daily basis. The new X-Files episodes, for example, and possibly older TV genre series.

You're probably used to my review format by now, but the DCAU has its own requirements too.
IN THIS ONE... gives a quick summation of the episode, in case you don't recognize it by title or picture alone.
CREDITS: Many episodes are written by comics pros (or people who would become pros), so it's fun to track that kind of thing. For actor credits, see SOUNDS LIKE.
REVIEW: The meat of the article.
IN THE COMICS: So how does the story compare to what actually happened in the comics? Was the story inspired by a "canonical" comics story? Or did the episode actually inspire comics down the line? How do the characters and events differ from their counterparts in mainstream continuity?
SOUNDS LIKE: Who's doing the voices, and where might you know them from?
REWATCHABILITY: A quick score (Low-Medium-High) to track my appreciation. Is this an episode I'd watch again and that bears repeat viewings?

If you've got all that, let's move on to the main event. 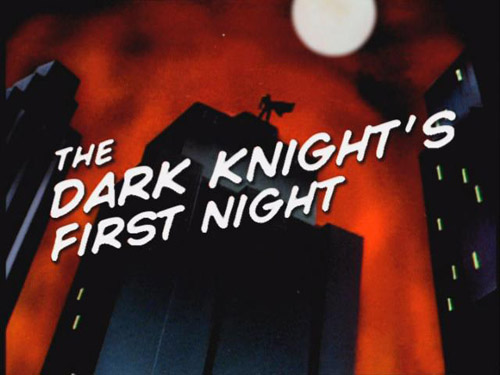 IN THIS ONE... Batman fights crooks on a roof top the first time he wears the suit.

CREDITS: Pilot by Bruce Timm and Eric Radomski to show Fox executives what they were planning to do with Batman: The Animated Series. It is on the Batman The Animated Series Season 1 release, but you can find it on You-Tube. Note that the original score was lost and replaced with Danny Elfman's music from Tim Burton's Batman film, which was repurposed for the animated series.

REVIEW: Less than two minutes and basically just an action beat, The Dark's Knight First Night nevertheless had to be a convincing "proof of concept" if Fox was going to give the reigns of a Batman show to the guys who made Tiny Toons. And it totally IS convincing. The look is brilliant, owing as much to Fleischer's old Superman cartoons as to the Burton film, Gotham as a kind of polluted art deco city right out of Fritz Lang, timeless for its 1930s-40s look. Famously drawn on black paper, the image is rich and saturated, with shadows prevailing over light. We don't see Batman's half-face for a while, and sequences such as the one with the giant shadows fighting on the wall put us in mind of film noir and silent films. The art design is simply gorgeous and well suited to the subject. The original music is lost, but the use of Danny Elfman's Batman theme is perfect for the series in any case, as it really is the best thing he's ever written, made even more iconic by its repeated use on BTAS.

But Timm and Radomski also had to sell their ability to do action well, and their animation is very promising on that score. Batman LEAPS at the camera. He's fast, he's nimble, he's acrobatic, all set to establish the high standard of action these cartoons will be known for. And there's humor too. It's slight, but Batman tapping a guy on the shoulder before punching him out adds just a little bit of fun. And look, a peek at Commissioner Gordon, which is cool, even he really should have red hair (at least, according to Mask of the Phantasm, which this is near to in terms of continuity). Most of the Batman family (including Bruce Wayne) and the unfolding of plots are all in the future at this point, but an explosive first step into a new world.

IN THE COMICS: Adopting the Burton film's production design aesthetic (as the original Flash TV show also did) and setting the series in an amalgam of different times during which the hero was published has always spoken to me, and I can't help but get some pleasure at the Crisis-red skies, as if it really did tie this world into a larger Multiverse.

SOUNDS LIKE: No dialog, so no voice casting yet, but Timm recorded Batman's grunts an Radomski the criminals'.

REWATCHABILITY: Medium - There's very little content here, so by no means is this required viewing, but it's interesting to see it was basically all there from the first.
Batman DCAU

Timothy S. Brannan said…
Oh! This is going to be fun reading!
Loved all these series and tehy made my kids into the huge DC fans they are today.
January 12, 2016 at 8:06 AM

Anonymous said…
I would have greenlit this series based on this.

That said, being used to the very polished and perfected animation of the series, there are a couple points of unintentional humor here. Dodging the bullets looks more like Daffy Duck than Batman. And the close-up of Batman's face scans like one of those "Ren and Stimpy" gross close-ups.
January 12, 2016 at 8:29 AM

Siskoid said…
Mmm, pretty complete. Those were some of the best comics DC ever put out! I can't even believe Mark Millar used to write for them!
January 12, 2016 at 9:46 AM

Andrew Gilbertson said…
Awesome- looking forward to this! Now, I'll just have to hope I can keep pace with your reviews so I don't fall behind. (Just hit the STAS/New Batman start point in my rewatch (which is also my wife's introduction to all of the DCAU *beyond* the New Batman adventures). Psyched to see your reviews!
January 12, 2016 at 10:16 AM

LiamKav said…
Strangely enough, I put on "Holiday Knights" when me and my wife were eating dinner on New Year's Day, and she didn't complain once. Possibly because it was holiday relevant. (Although I was her first time seeing the "New Adventures" look, and her main take away was "Why are everyone's ankles so tiny?" and "wait, THAT was the Joker? What the hell?")

Seriously (kinda), what's good about the Joker is that lots of different interpretations are "valid". Heath Ledger is the Joker in the same way that Jack Nicholson is and that Cesar Romero is. I suppose where Ledger has an advantage is that he was only in one really really really really really good film, so his reputation will remain untarnished. Hammill had to play him over and over again, and the best part was his range. He could be terrifying, he could be funny. But I'm sure I can save praise for when he turns up.