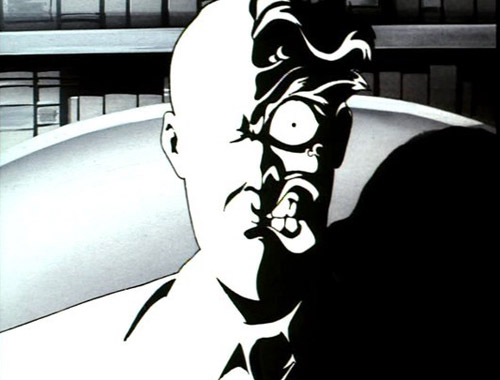 IN THIS ONE... Harvey Dent becomes Two-Face. (Two-parter)

CREDITS: Written by Randy Rogel (series writer on Anamaniacs; would eventually win an Emmy for a BTAS episode, but not this one) and Alan Burnett (has had a hand in almost every DC Comics animated project since the waning days of Super Friends); directed by Kevin Altieri.

REVIEW: Though Harvey Dent really only had a couple appearances before becoming Two-Face, they were rather good and memorable. And because he's been set up as one of Bruce Wayne's good friends, it makes him a more tragic figure when he turns. For his transformation into one of Batman's core villains, the pulled out all the stops, with two episodes, lots of atmosphere (it's thunder storm season in Gotham), and excellent animation (Batman's cape has a great FLOW!). But really, it's doubling this one's length that really helps it breathe and achieve everything it needs to achieve. I wonder how much of The Dark Knight film was inspired by this take on Two-Face. Specifically, showing us how Bruce and Harvey are mirrors of one another, both driven by childhood trauma and guilt (Bruce that he couldn't save his parents, Harvey that in anger he hurt a kid at school), both playboys (that's Harvey's second engagement in as many appearances!) with more violent second identities. And both are taking it out on crooks, though Two-Face is using crime's own trappings and will ultimately fall to the dark side. The difference between them is that Bruce created Batman early on to vent his anger, while Harvey bottled it up until it created a schism in his personality. "Big Bad Harvey", his angry evil half has always been with him, in fact, and ironically, becoming Two-Face has probably allowed his two halves to be the most integrated. He's actually healthier as Two-Face.

The origin of Two-Face varies considerably from that of the comics, and we'll tackle that In the Comics, but I wonder if it was considered too violent for the animated series (which by the way officially gains its title at the start of Part II, when we get a "Previously on Batman"). And yet, the explosion in the refinery is really shocking too. Harvey is sent flying and his broken body falls partly out of frame in a most upsetting way. And it has to feel tragic because Two-Face isn't the villain of the piece; he's the victim. At best, he's one of those romantic disfigured "heroes" like the Beast, the Phantom of the Opera, or the Hunchback of Notre Dame (though he's really Dr. Jekyll/Mr. Hyde) you're supposed to feel for, and the lighting (not to say lightning) effects push the story in that direction. Note how the episode steals from the 1989 Batman film, repurposing the Joker's "give me a mirror" scene (no worries, Batman Forever will steal the gag where Batman confuses Two-Face by throwing a roll of quarters from it). And like some of those romantic monsters, Two-Face IS loved. His fiancée Grace doesn't care about his disfigurement, and takes off the half-hood he wears to spare her his ugliness. They've crafted animated Batman's most complex villain yet (and perhaps, ever).

The actual villain of the story is Thorne, the mobster whose businesses Two-Face proceeds to go after, but he's unremarkable, as are most of his goons (Two-Face at least has the sense to get himself some twins who look like Jimmy Olsen, Min and Max, which are great names). But Candice is really interesting, a femme fatale type who nevertheless uses her brains rather than her seductive charms to hurt Dent and then Two-Face. And she gives Grace a reason to throw down as well, with Candice flying into a wall in a comical way during the big fight. I thought for sure Grace would get killed, cementing Harvey's descent into madness, but I'm glad she survives. Perhaps her death would have been too harsh for a cartoon show, but this episode, between the intense psychological drama and the occasional political humor, felt adult enough to make me believe it could happen. Sadly, she doesn't appear on the show again, but she does put in appearances in the tie-in comics, so we'll see her again. Thorne WILL be on the show again, however, so that's some nice continuity if he's meant to be this mobster with half the city officials in his pocket.

IN THE COMICS: Two-Face's comic book origin involves someone, mob boss Sal Maroni, throwing a vial of acid at him during a trial. Jeepers! He was created by Bob Kane and Bill Finger, and first appeared in Detective Comics #66 (1942). His suit was usually orange and purple rather than black and white, and maybe such a color scheme, while less on point, would have prevented him from looking like he's running on a single white leg in this episode (possibly its only flaw). Harvey Dent really was married to a character named Grace in the comics, but only sort of - Gilda Grace Dent. First appearance of the (animated) Batcycle as well. Though the '66 TV series is often credited with the first Batcycle design, Batman and friends have been on motorcycles since at least 1950. Rupert Thorne in the comics was a city councilman antagonistic to the Batman, and involved in the disfigurement of an entirely different villain - Dr. Phosphorus - appearing for the first time in Detective Comics #469 (1977).

SOUNDS LIKE: Grace Lamont is played by Murphy Cross, who also played a lady friend of Richard Moll's character, Bull Shannon, on Night Court. Cute. Min and Max are played by Micky Dolenz of the Monkees. Diane Michelle who played Candice would later play Lashina on the Superman Animated Series.

REWATCHABILITY: High - The strongest introduction to a villain yet, and that's because they take their time telling the story and creating the visuals. A most adult episode and a true classic.
Batman DCAU

snell said…
It is interesting, I think, that current comic books largely ignore the existence of Two-Face. Not just in the interest of all-Joker, all the time, but even to the extent of making Riddler--Riddler!!--a genocidal mastermind. I'm sure there's some reason why DC has 100% adopted BTAS' Mr. Freeze, but run hiding form the Harvey Dent idea. Thoughts?
January 22, 2016 at 8:42 AM

Anonymous said…
I wouldn't say DC has 100% adopted DCAU Freeze seeing as his backstory with Nora has been retconned out under Scott Snyder. I think Two-Face has been ignored because a) New 52 Batman favors extremely high treats, b) Peter Tomasi has already done a story with him (and killed him off) and c) most Two-Face stories revolve around him falling in and out of madness. Interestingly, Scott Snyder has said he's planning a Two-Face story soon, one that'll make him much much more dangerous. So you kinda sorta maybe will get your wish.
January 22, 2016 at 11:57 AM

LiamKav said…
There is an argument that the best Two-Face stories are the origin ones or the ones where he is cured. As David Willis once pointed out, he does kinda become "mob villain who likes the number 2" after this point. I guess we'll see how true that is. (To be honest, you could make the arugment that you don't actually need part 2 of this story. It's all in part 1.)

My main memories of watching this growing up were that I had no idea who Two-Face was, so this story was how I was introduced to him. I was quite surprised when I found out the comic origin was different. It means things like the court-room scene teasing the comics origin in "The Dark Knight" didn't register with me, because that's not how he is created in my mind.

I also remember being confused by lots of the terminology. Being 12 (and being British) I had no idea what district attourney's were. Between that, mobs trying to buy out people to use rather than killing them, a fairly adult view of psychiatry (Bruce saying that it's nothing to be ashamed of is correct, but Harvey is also correct in pointing out that not all the voters will feel that way)... this is a much more mature episode than we've had previously.

One big difference between this episode and "The Dark Knight" is that Big Bad Harv doesn't seem to have the duality obsession. It's a part of Harvery's character in the movie to a degree, but here Big Bad Harv is merely his repressed feelings. The duality comes as a result of the personality split, rather than being a factor in it's creation.

I really like Rupert Thorne. I believe the reason he was created rather than using an existing gangster was to avoid the cliche of the mob all being Italian stereotypes. John Vernon does a great job voicing him.

I am a bit disappointed by the slightly sexist portrayl of Grace. She really wants Harvery to marry her. She faints at the sight of his hideous face. Apart from Montoya, we haven't really had any strong female characters at this point. (Poison Ivy is a whole other kettle of feminism vs sexism argument.)

Finally, part one is the first episode animated by TMS, and it looks outstanding as a result.
January 22, 2016 at 1:53 PM

Siskoid said…
Great comments. Grace's character is obviously limited, but she does find her legs by the end. There's nothing weak about loving another person, and she really does. She's no trophy wife or political gold digger.

Anonymous said…
This is a good episode.

About Two-Face himself, I like the interpretation of Scipio over at the Absorbascon: Two-Face's core problem is that, as a lawyer, he can justify evil as easily as good, and has lost the ability to choose one over the other. So it's tough to cure him of his coin because the coin is the SOLUTION to his deeper problem.

Tomasi's interpretation of Two-Face was something like that too: he used to be an attorney for crime families, then he became a D.A. Then Harvey killed himself, but there's sort of a new Two-Face in play: a childhood friend of Bruce Wayne's, a crime family lady named Erin McKillen whose beloved twin sister died and who has a scar on one side of her face. She hasn't been used yet as far as I know, but she exists.
January 22, 2016 at 2:46 PM

Andrew Gilbertson said…
"There's nothing weak about loving another person, and she really does."

LiamKav said…
That's true. I just feel she lacks agency of her own. The fact that she's never seen again in the TV show after this doesn't help. As I said, by this point we've had 3 female characters with personality over 11 episodes, and one is defined as "wife of main protagonist/antagonist" and another is "uses feminine wiles to get men go do her bidding". If there were more women it would be less of an issue. And I do really, really hate the "woman faints because she just can't handle what's going on" trope.

Candice is actually a really good character. Despite being possibly the most attractive woman shown so far, she actually gets all the dirt on Harvey by using her cunning. She's great.
January 22, 2016 at 8:45 PM