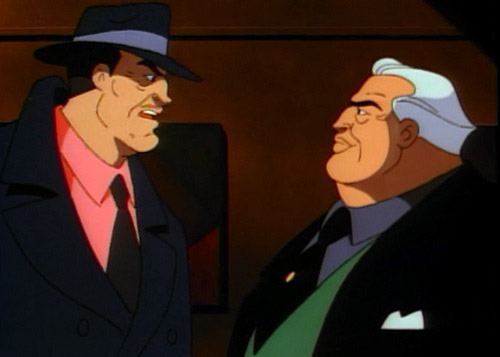 IN THIS ONE... Batman tries to convince a mobster to give up so he can stop a gang war.

REVIEW: Rupert Thorne returns to cement his hold on Gotham City's underworld as a gang war rages and Batman plays a much deeper game than he usually does. His plan is to actually redeem one mobster, Stromwell, so the violence will end, using Stromwell's own brother, now a priest, as his willing instrument. Controversially, this will give Thorne a near monopoly, so even if the episode doesn't really address it, it could lead to discussion on this gray area. And to the writers' credit, Stromwell doesn't turn easily. Even seeing his son going through withdrawal doesn't make him renounce his drug peddling; he still tries to kill Batman at the earliest opportunity. It's his childhood trauma that does it, and his guilt over his brother's near death (and loss of limb), which is very appropriate for a character like Batman who is likewise driven.

Directorially, the episode shines. The sepia flashbacks look good. The haze of nerve gas creates a rich, grainy, filmic look to certai scenes that could really be the look of the whole show, as far as I'm concerned. Certainly fits the film noir crime thriller this is. The reveals are well played, like when Batman comes out the back door of the burning restaurant with Stromwell on his back, or when he prepares his bat-rope on a rooftop and has you wondering what he's about to do long before he does it. The opening also bears mentioning, with kids running in the street in front of a mobster's big house, putting the city's violence in context and tying into Strowell's (adult) son missing, and his own memories of a rough and tumble childhood.

The weaknesses are in the writing. Most blatantly, Gordon characterizes the gang war as a generational one, with the "younger" winning. But Thorne and Stromwell look about the same age; Thorne might even look older! The anti-drug message is blunt and obvious, melodramatic. The scene with the guy who spotted Batman, who he thought was just an urban legend, is way over the top. And there's a missed opportunity, I think, in not making Batman Stromwell Jr.'s "kidnapper" (or at least, not clearly). Still, there are some gems as well. For example, I love that Stromwell ALSO has a goon who thinks he looks good on TV, a running gag started with Thorne in the previous episode (and kind of shared by Bullock with Gordon here).

SOUNDS LIKE: I somehow skipped Rupert Thorne's voice actor yesterday, but this is John Vernon, Dean Wormer in Animal House. Stromwell is voiced by Eugene Roche, a veteran television TV actor, and his brother Michael by Paul Dooley, an even more recognizable veteran television actor (I know him well thanks to roles on DS9 and the Practice, others might recognize him as the voice of Sarge in Cars).

REWATCHABILITY: Medium-High - There are a couple of missteps, but mostly a strong crime thriller without any costumes villains barging in.
Batman DCAU

Anonymous said…
I give this episode a "High", because it's that good.

But I chalk that up to the showrunners still learning their lessons, and I don't think they make that mistake again, so I can completely forgive them.

Also, something I sort of miss: the role of mainstream priests as voices of sanity / moral guidance in TV and movies. I understand why we don't do that so much any longer -- there are very legitimate reasons to question whether they have any actual moral / spiritual authority in general -- but it still was a role that I miss. ("Due South" was the last show I was aware of that did it a lot, but it worked in a show that allowed for good people to be very good and very sincere about it.)

Another example. Here's an early Leonard Nimoy movie where he plays a hoodlum who, through the guidance of a priest, learns to make something of himself:

Siskoid said…
Those flashbacks aren't for us, they're for Stromwell. They mean to show that he's haunted by the same memory over and over again; it's a trauma. But in a 22-minute show, I can see why it would be irksome.

The priestly trope is still around, I see it fairly often, but the characters really need to be religious for it to happen. What's been phased out some, is the idea of the priest as (positive) "community leader", respected regardless of any religious connection, which is what he is here. Batman isn't Catholic, he's just using this guy's connection to Stromwell. And if Father Michael were in this story without a blood tie to the mobster, he could still be his parish priest and have an impact. But we get more cynical as churches are shown to be just yet another "political" structure with its own ambitious bad apples tainting the entire thing no matter how many good-hearted people are also part of it.
January 23, 2016 at 8:29 AM

Anonymous said…
Priests as community leaders, yes, that's what I had in mind. Thanks for clarifying what I was struggling to explain.
January 23, 2016 at 9:10 AM

Andrew Gilbertson said…
I think you hit the nail on tje jead, Siskoid- though I'd add to it that as society's standards and the church's become increasingly divergeant, there is a stronger desire to reject the idea that a church viewpoint could have any merrit... and with both an increasing focus on science and technology (falsely stereotyped as something religion is opposed to), and the Islamic terror situation leading many to the false equivalency of 'ALL religion leads to stuff like this, therefore it is bad for humanitity,' society likewise increasingly tries to distance itself from acknowledging anything positive about religious beliefs or their holders, so that it can more easily dismiss the concept outright.

Then again, this is a trend that's been ongoing for decades (which I see epitomized in The Legend of Zorro)... anybody portrayed in film or tv with true religious belief, referencing verses or actually naming a religious figure (like Christ) is portrayed as a bigot, hypocrite, or psychopath... while the few positive 'community leader' please make little to no reference to any actual God, beyond a vague, generic, Touched By An Angel god-with-a-little-g-loves-you platitudes, and focus almost solely on the social work. The argument could be made that this is at least a positive for trail, showing them living out their faith and deeds as well as words like it was more that these figures had been generacized and 'de-fanged' until they were non specific and religion-unrelated enough for society to be comfortable acknowledging them as positive.

In the last decade or so, mainstream society just , hence the disappearance of the community leader priest figure.

Wow, I have a little to say on the actual episode as I did on to face - pretty much just agree with you, Siskoid- but these reviews seem to really be opening the door on a lot of social and political commentary. This is a bad habit for me, as I've tried to swear that off on the internet (seldom ends well)... but your blog is like The Godfather- 'I try to leave, but they keep pulling me back in.' (He bluffs, having no more seen the Godfather then he has Rashamon.)
January 23, 2016 at 10:36 AM

Siskoid said…
Well I don't on the whole encourage political and religious talk, but as long as every once is civil, thoughtful, and respectful of others' views, I don't really mind it.

Andrew said…
Once again, I forget now where I saw it (curse my lack of detailed note-keeping during random websurfing!) but I've seen this first season described as the fall of the old-school criminal mob and the rise of the super-villain as everyone reacts to Batman's presence in Gotham. So in one (admittedly meta) sense Gordon's absolutely right. And the old guard will absolutely keep losing if, like Two-Face, they keep creating their own replacements.

Thorne may be in a stronger position now that Stromwell's out, but that also makes him a bigger target.
January 23, 2016 at 10:29 PM

Anonymous said…
"Touched By An Angel"

Hey Siskoid, just in case you need another show to review ...

You could even have a review category called "Bob's Burgers or X-Files?" wherein you discuss whether the "I'm an angel, I've been sent by God" scene looks more like a burger warmer lamp or an alien abduction.

"Then again, this is a trend that's been ongoing for decades (which I see epitomized in The Legend of Zorro)... anybody portrayed in film or tv with true religious belief, referencing verses or actually naming a religious figure (like Christ) is portrayed as a bigot, hypocrite, or psychopath... while the few positive 'community leader' please make little to no reference to any actual God, beyond a vague, generic, Touched By An Angel god-with-a-little-g-loves-you platitudes, and focus almost solely on the social work."

... I've noticed the same thing, and I think in part it's lazy writing: it's a new and exciting twist that the guy who is superficially devout is secretly a monster, and surely it can never get old and cliched.

I don't have a problem with the "good" religious leaders being largely secular in how they operate, because there is nothing about taking care of the needy that requires preaching. But I believe that the truly religious make their lives an act of worship, and taking care of other people counts. Here's a scene from "Due South" with a pretty good priest:

It's one of the Peter Lefcourt episodes, so it hinges upon Benton and Ray persuading some "civilian" to do the right thing rather than the two doing all the hard work. Great series, the episode in question is pretty damn fine, and I'm sure the title of the episode ("A Hawk and a Handsaw") won't be lost on all parties here.
January 23, 2016 at 10:38 PM

Siskoid said…
Certainly not, and you're preaching to the choir - so to speak - when you praise Due South. I love that show. It's hard to believe how edgy Paul Gross is in almost everything else he's done.
January 23, 2016 at 10:53 PM