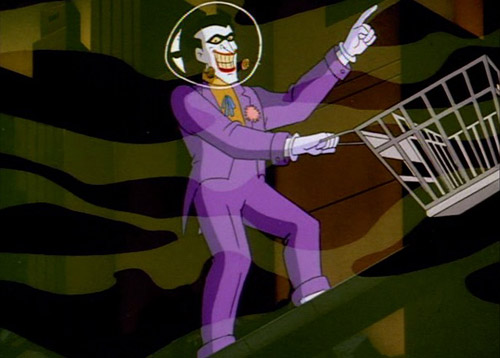 IN THIS ONE... The Joker tries to laugh Gotham to death on April Fool's.

CREDITS: Written by Carl Swenson (only credit before moving on to Goof Troop); directed by Kevin Altieri (largely responsible for C.O.P.S., he would go on to work on G.I. Joe, Transformers, and Young Justice).

REVIEW: Does the Joker only come out on holidays? First Christmas, now April Fool's. Well, this one's rather well adapted to him. You WOULD think he's use the day to prank Gothamites, but instead it's just a crime spree covered by Joker gas that incapacitates everyone with laughter (higher stakes: prolonged exposure may cause insanity). The Joker uses a stinky garbage scow and a robot clown, and spends time on a river and in a foundry/garbage processing plant. Not the most coherent episodes, thematically. April Fool's is, in fact, pretty much wasted, with only Alfred and Batman actually "pranking" one another in the most unfunny ways. Forced laughter ensues, and Alfred's trademark deadpan falls flat.

Is the Joker funny? He does get a few good lines - laughing stocks, sink so low, etc. - but there are also a lot of tired clichés. He's more effective as a terror than a comedian, frankly, with the scene in which he puts Batman in a barrel, stabbing holes into it and throwing into the river, a particular highlight of dangerous lunacy. Once that scene puts his madness into context, his laughter becomes completely unhinged no matter the trigger. Batman's escape from a watery grave isn't quite as dynamic, though it does involve the Batboat, which does look cool indeed the way they make the water go by, but it's still slightly more exciting than his swinging from hooks and gears inside the foundry (wait, why does that set look so familiar? is that where Two-Face gets made later?!). The production team will eventually make the action sing, but at this point, it's still a little slow and stilted in parts, and I'd rather be watching their atmosphere.

Annnnnnnd it's the first time Efrem Zimbalist, Jr. voices Alfred, replacing Clive Revill's (who was ALSO replaced as the voice of Star Wars' Emperor in one of George Lucas' many tweaks, so I guess that's his lot in life), and he's clearly a superior choice even if the script doesn't give him the best scenes. Still, the change is notable. Gordon and Bullock don't appear, but hey, look at Summer Gleeson reporting on the situation in a gas mask. She's pretty gutsy!

IN THE COMICS: The Batboat premiering here first appeared in Detective Comics #110 (1946), but the design is the modern style used in the 80s and 90s.

SOUNDS LIKE: Efrem Zimbalist, Jr. had a long career in show business, first peaking in the 50s and 60s on television shows like 77 Sunset Strip and The F.B.I., and the peaking again in the early 90s thanks to well-regarded voice work, including his role as Alfred from here through to the character's last appearance. His daughter Stephanie co-starred on Remington Steele.

REWATCHABILITY: Almost Medium - The Joker has a few good bits, but mostly, this is neither as funny or clever as the character deserves.
Batman DCAU

LiamKav said…
Don't forget Efrem Zimbalist, Jr's role as charming-old-guy-who-is-kinda-Hilter-to-telepaths from one of your prior marathon watches. :)

Like the previous Joker episode, this one is also animated by AKOM. If you ever watched any 80s toy cartoons (like Transformers or GI Joe) you'd instantly be able to tell an AKOM episode, as they always looked terrible. Flat colours and stilted animation. They're not bad here, but the action certainly lacks zing. They eventually get fired from the show after the directors got sick of making them do retakes.

One thing that's noticable about this version of the Joker... he's not just the "force for chaos" that he would later become in the comics. He commits actual robbery. He's interested in money. He's annoyed when Batman shows up, and shows irritation and anger repeatedly. It certainly makes the character a lot more usable on an ongoing TV show, especially when he's not actually allowed to kill people at this point. I don't think we get the classic Joker toxin until the New Batman Adventures.

Like the comments we've made about Batman shutting down all the clown factories, he should probably spend April Fools Day permanently following the Joker. And do a similar thing for the Scarecrow on Halloween. And stick to Harvey Dent like glue on second of February.

Batman seems a fair bit more competant than last episode at the fighting. He takes down the (human crooks) with almost zero effort, and him catching the razor sharp card at the end is a delight. (As is his grin! Best part of the episode.)

Oh, and Bruce... you're Alfred's employer. You can't make jokes about cutting his salary. That's just bad taste. Comedy should punch up, not down.

(Still, good thing the Bat Computer doesn't really understand the meaning of the word "permanent".)
January 16, 2016 at 8:35 AM

Andrew Gilbertson said…
I think we got Joker Venom in the Laughing Fish.

Siskoid said…
Liam mentions a connection to Babylon 5, I'll mention another: That series of reviews ALSO inspired regular commenters to leave long, involved, expert comments that highlighted various connections across the whole series, behind the scenes information, and so on.

American Hawkman said…
The "You Killed Captain Clown" build to murderous frenzy is a quintessential Joker moment that truly shows his madness.
January 16, 2016 at 12:39 PM