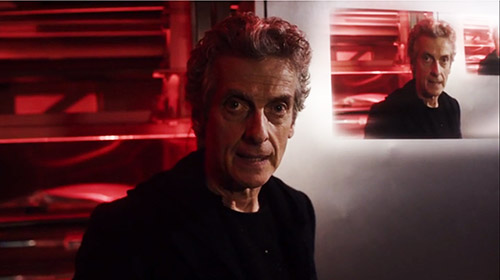 IN THIS ONE... Untrustworthy found footage episode about monsters made out of eye gunk.

REVIEW: I'm not against Doctor Who attempting a found footage episode, even though I feel the format has been overused and played out on film, especially in the horror genre. What I AM against, is one that's a boring mess like this one. There's just so much running around in the dark with shaky cams that it totally overwhelms whatever good bits there are, including some of the fun banter between the Doctor and Clara (liked the Silurians joke, though a joke about Vicki would have been appreciated too), and the creepy final scene. But though it seems to WANT to be meta, an episode you shouldn't watch that follows "story rules", that just never really comes together in a meaningful way, so all we have is an incomplete story - it really needed the Doctor to chime in at the end to tell us he fixed everything - in which the Doctor keeps shouting about how none of it makes sense. So half of what we see is murky and dull, and the other half is apparently all a hoax anyway. Gatiss is badly channeling Mofatt's greatest hits here.

It doesn't help that the monsters are complete rubbish. As rude as Vervoids, too. It's just never well established just how "sleep dust" is meant to become sentient. If Morpheus changes brain chemistry to allow you to take a month's sleep in 5 minutes, why should it give you epic pink eye that devours you? And if the sleeper's sentience is somehow passed on, why do the Sandmen compared to "children"? Why does the dust have wi-fi and turn into a tiny camera? If all Morpheus users are being slowly turned into Sandmen, then why do the monsters need to even attack? And if it's all fake and the Sandmen are like Rasmussen at the end, fully sentient and able to take on human form, why am I watching the first 40 minutes of this at all?! There's a way to do the whole "everything you think is true is wrong", but running in the dark for minutes on end between epiphanies isn't it. By the mid-point, I was bored out of my skull. Is the episode itself supposed to put me to sleep?

But even if I were to like how the episode plays with the real and the unreal, and want to hold it up as an example of a story where the Doctor completely fails and oh, how original, etc., I can't get past its lack of resolutions. I don't mean the ending. I can certainly figure out that the Doctor cured Clara after the fact, for example. I really mean that the episode keeps trying to make a point, then runs away from that point. The Grunt is the best example. Clara is incensed that 38th-century humans "grow" and enslave troops, but nothing really comes of it. The Grunt even has feelings for another person in the crew, and they get what is meant to be a sweet moment when the former gives up her life (might work better if he hadn't been crappy to her otherwise), but I'd hardly call that making a point. The Doctor's big poetic tribute to sleep feels like a writerly drop-in, not connected to any kind of solution. Sleep keeps the monsters inside at bay, but here the monsters are outside, but there's no indication that they spring from nightmares or the subconscious. There isn't even a reason for Chopra never to have used Morpheus, and you're telling me the military doesn't mandate he do so? Come on. Rasmussen call the episode "compulsive viewing"; it's nothing of the like.

REWATCHABILITY: Low - Taps into all the worst tropes of found footage movies. Certainly not worth excluding the opening sequence for.
Doctor Who

Anonymous said…
This season's "Forest of the Night", where the Doctor gets all preachy about something that is utter nonsense and the story makes no goddamn sense.

This episode is basically a styrofoam packing peanut that takes up space leading up to the three-parter. I wonder if the intention was to make it as crappy and irrelevant as possible, so it can't be linked to any of the themes this season?
January 7, 2016 at 10:03 AM

Andrew Gilbertson said…
Wow. I didn't hate it that much (I think my wife did; she *did* fall asleep while watching); I thought there were a few interesting touches, at least. But yeah- definite contender for the weakest of the season. (Mind you, my list of other contenders may not match with anyone else's...)
January 7, 2016 at 10:50 AM

Siskoid said…
A mess of good ideas rendered null by not completing a single thought. It was a cool 20 minute short story, and then they put 25 more minutes of stuff in it.
January 7, 2016 at 11:12 AM

Siskoid said…
And here I force myself to write three-paragraph reviews of everything.
January 7, 2016 at 1:24 PM

LiamKav said…
"Certainly not worth excluding the opening sequence for."

Hey, I thought that was the best bit. :)

After a repeat viewing and reading some articles/interviews, I get what this episode was trying to do. Kinda. It's all a massive misdirection, with the twist being that even the Doctor doesn't find out... we are the only ones who do. Unfortunately, I just don't think it works. This is a bit of a recurring problem with Gatiss's stories. He has confirmed that there will be a sequel to is, so I wonder if that will help.

The one thing I did like was how I spotted plot holes at pretty much the points the characters addressed them. I realised that we had just had a shot from Clara's POV, and then we get the conversation about how they don't have helmet cams. My wife said "Hang on, didn't he die" just before Rasmussen says "obviously, I'm not dead".
January 8, 2016 at 9:42 AM