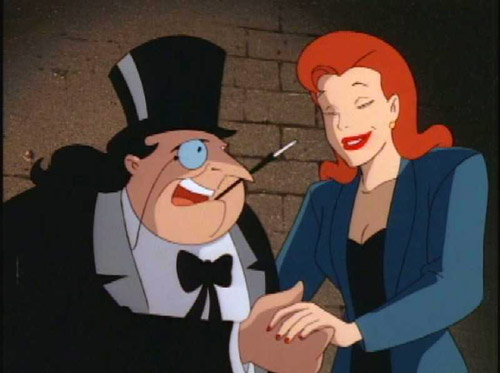 IN THIS ONE... The Penguin finds love and reforms... until he is betrayed by the woman he hopes to marry.

CREDITS: Written by Brynne Stephens and Chuck Menville (writer on such cartoons as Tarzan and The Smurfs, this was his last script; he died a year before the episode aired); directed by Frank Paur.

REVIEW: I shouldn't be hung up on the timeline, but this Penguin story is very odd. It requires the villain to have "done his time", and given he's appeared three times before and been captured each time, seems kind of unlikely (especially since they aired it even later than the production order). The only way it makes sense is if it takes place first in his timeline. In his first actual appearance (in "Basement"), he and Batman already knew each other. So let's take this episode's teaser and its art theft as the first Penguin crime, then years later, he comes out of prison a reformed man. Has his heart broken. Returns to crime. Then all the other episodes happen. Okay, now I can think more clearly. Wait, no I can't. They say reformed, but his first thought is to rejoin his friends, including Killer Croc who wouldn't have a history with him at that point, surely, nor Two-Face who was minted within the series' time span. Ah forget it.

So paroled, but not really reformed - he wouldn't have the right to hang with known criminals - at least not until he falls in love with Veronica Vreeland, a socialite who makes the first of many appearances here. She and even snobbier friend Pierce Chapman are blasé aristocrats who want to jack up their cred by inviting the Penguin to a party. But while Pierce remains a jerk throughout, Veronica does show she has a heart, no matter how fame-hungry she is. She finds the Penguin disgusting, but really kind of sweet (although this is highly uneven). Nevertheless, she pushes him to a dark place. They go to I Pagliacci together, which you'd think would fit better in a Joker story, but it does share of the episode's themes, and later, the Penguin uses the opera house as a staging ground for a death trap to get his revenge.

It's kind of intriguing, not to say puzzling, when Bruce Wayne is shown hanging out with the idle rich of his generation. You'd think he wouldn't really have time for them, and even if he did, that he'd find them morally lacking. He should be outraged by their behavior even before they "turn" Penguin back into a criminal. Of course, Batman never really believed any of his rogues could turn over a new leaf. He makes it clear that he doesn't believe the Penguin here, stalks him at every opportunity, and jumps to the wrong conclusions when he comes across him and Veronica in an alley fighting some thugs (and the Penguin does have a fun - and surprisingly effective - fighting style). Another oddity then: While the Penguin easily goes back to his old tricks, it's everyone else who acts dishonorably and (re)created the monster. Batman and Veronica are more in the wrong than the Penguin is. We're used to villains who were bullied and humiliated losers (Mad Hatter, Scarecrow), but the Bat didn't do the deed in their cases!

SOUNDS LIKE: Veronica Vreeland is played by Marilu Henner, most famous for Taxi. Sam McMurray voices Pierce Chapman; his many credits include The Tracey Ullman Show, Friends and King of Queens.

REWATCHABILITY: Medium - Not a bad Penguin story, but the series is starting to get repetitive with its "love denied leads to villainy" trope.
Batman DCAU

Andrew Gilbertson said…
This one really bugged me, because for all his pretensions of civility and nobility, the Penguin shouldn't be so ignorant of basic table manners or etiquette. Clearly a holdover from the accursedly-influential Burton version, but it doesn't seem to gibe with this (or most other) 'gentlemanly' versions of the Penguin. (Maybe 'The Batman's boorish version...) I think the story of betrayal and class prejudice would have been much stronger without it- leaving only his physical abnormalities and lack of 'status' to cause the snubbing and betrayal.

I also hate 'recreating the monster' stories, with a vengeance (in fact, the eventually-upcoming second Clayface story was my introduction to Batman, and soured me on the character for most of my childhood)- so that might contribute to this one sticking in my craw.

I do wonder if Batman stalking the supposedly 'reformed' Penguin and jumping to the wrong conclusions is a reference to The Penguin Goes Straight/Not Yet, He Ain't from the '66 tv show, which also involved a romance and betrayal (though in this case, from the other direction)...

And while I will agree that the 'love denied leads to villainy' trope is tiresome at this point (partly as I am a romantic at heart and hate to see love denied in the first place), I will say that as someone who's been there at one point- it is the most believable (or at least relateable) villain motivation for me. Seldom do emotions run higher, or wound deeper; so whenever a villain motivation revolves around a significant other, it ups the empathy and realism for me. (I just don't want to see it frequently; Mr. Freeze's sympathetic situation and Mad Hatter's extremely creepy obsession are enough variations on the theme for one show, methinks).
February 23, 2016 at 1:20 PM

American Hawkman said…
The episode is actually a take on the 1987 Batman Annual, although that Batman had the decency to feel ashamed of himself.
February 23, 2016 at 6:01 PM