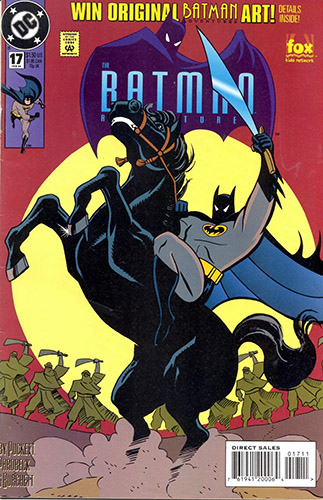 IN THIS ONE... Batman and Robin infiltrate Ra's al Ghul's cult to stop him from triggering an apocalypse.

REVIEW: Ra's al Ghul is back to his old apocalyptic tricks - much better than his The Mummy adventure once he returned to life on the show - but alas, the story is a little too convoluted for its own good. It has Batman going undercover as a henchman in a jungle base, but it's all part of Ra's plan for him to do so, because it's a decoy while Ra's actually spends his time in the desert to launch an attack on the Antarctic, and when he captures and unmasks hench-Batman, it's actually Robin in disguise, and Batman is the sword-yielding assassin that was seen earlier and was very obviously Batman, and it looked like Ra's knew from his smile, but he was really duped. And I don't know who that Native with braids, or the American cultists with brushy mustaches... Will there be a follow-up? Ra's organization has become truly international, but in the process lost its identity.

I'm also not altogether sure where Ra's is most of the time (his plane? that doesn't look like a plane interior), or why the icecap-melting satellite blows up at the end.

That said, the comic isn't completely remedial. Parobeck's art is good as always, and he manages a cool transition when the henchman Batman replaces wakes up in a plane in front of Gordon, as well as some dynamic action, including Batman chasing a jet with a horse. It's just a shame about the plot. 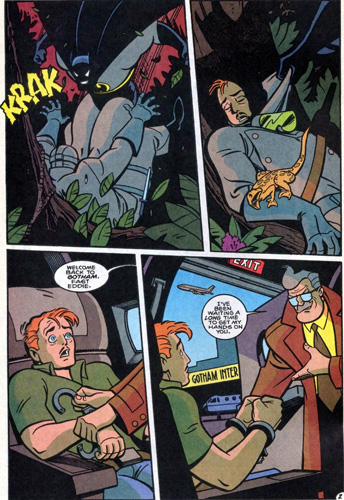 REREADABILITY: Medium-Low - Too much happening and yet not enough in this mess of a plot structure.
Batman Comics DCAU