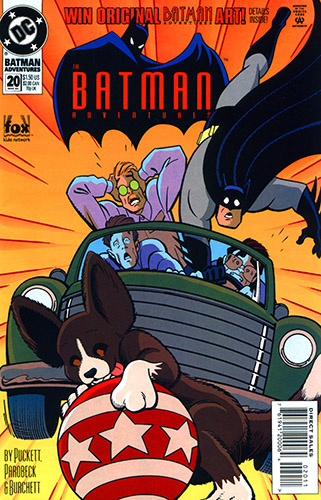 IN THIS ONE... Mastermind, Mr. Nice and the Perfesser break out of prison and go on a well-coordinated crime spree.

REVIEW: I don't get the title, but... they're back! The Batman Adventures' only original villains, Mastermind, Mr. Nice and the Perfesser, team up to bring the funny. They're not Batman's greatest foes, but they may be the most amusing (sorry Joker, that's not the word I'd use to describe your act). While their scheme is just okay (mostly a long car chase, and an offputtingly violent climax), their prison escape is delightful. Mastermind has it all planned out to the millimeter, Mr. Nice acts as apologetic muscle, and the Perfesser uses his knowledge and talent to carve a flute that makes the right frequency to disable the guard dogs... it's crazy and fun.

And even if I don't rate the main plot that highly, there are amusing moments in there as well. The Perfesser musing about nitrous oxide. Mastermind's convoluted route. And Mr. Nice going against his nature and liking it, until disarmed by the cute puppy guarding the nuclear missiles. But yeah, Mastermind making himself a nuclear power is bizarre, Parobeck's idea of a puppy looks to me like a demon spawn, and Mr. Nice's battle is staged in such a way as to look like mass murder even if it's not addressed. Just HOW he cuts through a military base's defenses (where half the soldiers are using bazookas and Mr. Nice only a Gatling) isn't even clear. Fortune favors the bold I guess. So the characters are let down by the plot in the end. 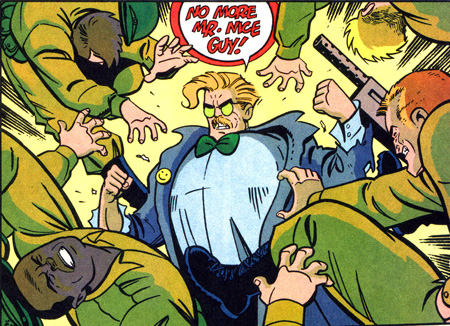 REREADABILITY: Medium - I love these guys, but I can't quite give this story a higher rating. Should have cut down on the chase scene to buff up Mr. Nice's intrepid mission.
Batman Comics DCAU