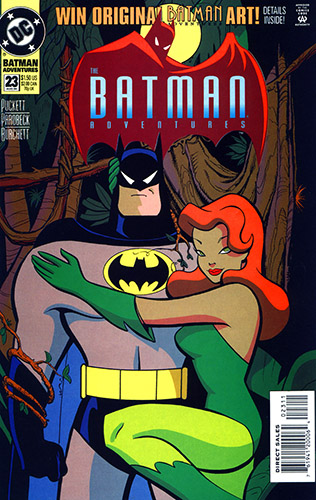 IN THIS ONE... Batman asks Poison Ivy's help in finding the antidote to a rare Amazonian poison killing a South American eco-warrior.

REVIEW: I like stories where Batman teams up with one of his villains - maybe they remind me of the Suicide Squad - and Poison Ivy makes sense as a partner given her unique skills as a poisoner--I mean toxin expert. The Ivy presented in this story is far from reformed, and I love the scene where she gets a a guard to get her some plants, and almost kisses him with homemade, toxic lip gloss. Batman dryly sending the man to the infirmary is equally delightful.

So it's kind of too bad the plot isn't sturdier. Despite Ivy's expertise, it looks like a lot of the work is done with a computer, and there's little interplay between the two proverbial strange bedfellows. And then there's the absolute lack of surprise that the El Commandante type is the one who ordered the hit on the environmental hero. When there's only one suspect, he or she usually did it, y'know? The action scenes ARE well drawn and feature some cool, if slightly unbelievable batarang action, and I do give some points to the ending with Ivy out in the Amazon collecting the rare poisonous flower she just stole the antidote to; it's a nice ironic image.

Finally, a question about Poison Ivy's coloring in these comics. I find her bronze skin tone strangely atypical of a redhead's usual, and the clash of colors is garish. Is the colorist's reference a shot of her in shadow on the TV series? It's not the first time, and it kind of bugs me, is all. 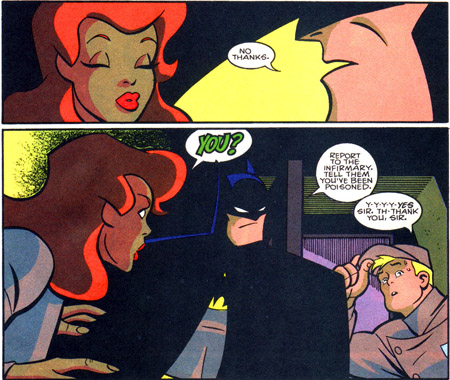 REREADABILITY: Medium - Great opening scene for Poison Ivy, but the plot is all too obvious.
Batman Comics DCAU