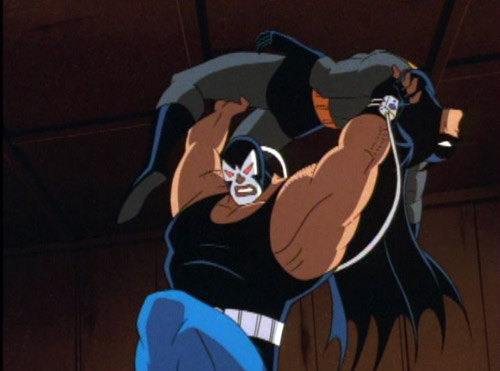 IN THIS ONE... Bane comes to town to break the Batman. First episode of the rebranded The Adventures of Batman & Robin.

REVIEW: Before getting into the review - and I'm not going to hold the episode responsible for this - can we just take a minute to fondly remember the series' original opening and bemoan the new Batman & Robin sequence, with its boring old montage of previously aired footage, and more tepid theme? Okay, let's get on with it...

I may have been heard to say lately that Doomsday is a character that was created for a single purpose (killing Superman), so that every time he is used, that single story will play out again. Bane is in the same boat, but just as in the comics he found a new calling as a member of the Secret Six, in the animated series, the show's inability to let Bane break Batman's spine and complete his arc gives him the lease on a better life as a sort of Kraven the Hunter type. And the luchadore look, an adaptation no doubt based on his South American heritage, actually pitches him better as one of Croc's cohorts and does away with an origin that would be much too dark for the cartoon show.

I have the same resistance to Bane the showrunners did - he's a gimmicky trope I don't like, the big bad you've never heard of who manages what better villains never have without earning it - but in their hands, he's a pretty good character. A physical threat, yes, but a mental and charismatic one as well. Consider mob boss Rupert Thorne's position in this story, getting his secretary stolen away and almost his empire. There's something magnetic about Bane, much as there is about Batman, a link made by almost jokingly showing his baby face under his mask, the mask a symbol of both men's power. And even if he can't cut loose like he did in the comics, or at least, not on screen, there's still something extreme with his violence. Seeing a shirtless Robin hung over his watery grave with a weight tied to his feet is just a notch more intense than the show's usual fare.

And can I just say? The sexy Candice returns after too long a respite (last seen all the way back in the original Two-Face two-parter), and gives as good as she gets. That fight between her and Robin in the water shows her winning most of the time. She's savage! But in that scene lies the seeds of my own complaint. These intense moments are interrupted, I feel, with comedy bits that don't fit the story's tone. Batman is having a big climactic fight with Bane, one that for comics fans might well end very badly indeed, and we keep cutting to what sometimes looks like kids dunking each other in a swimming pool. There's also the matter of Batman bouncing off a guard railing as if it were a rubber band, while playing with the luchadore motif, is pretty absurd. And Bane's defeat, brought on by an out-of-control Venom delivery system, has him pop his eyes out and send his lenses careening... Had this been Japanese anime, he would have exploded in a gory mess. Such as it is, it's like a cross between THAT scene in Total Recall and Ren & Stimpy.

IN THE COMICS: Bane first appeared in Batman: Vengeance of Bane #1 (January 1993) and was created by Chuck Dixon, Doug Moench, and Graham Nolan specifically for the Knightfall storyline which would see Batman maimed to be replaced by Azrael. Bane's origin is similar to, but much more involved than, the one glossed over here. His defear of Killer Croc, capture of Robin, and attempt to break Batman's back over his knee (in the comics, he succeeds), are all echoed from Knightfall. The Venom compound he uses to artificially bulk up had been introduced in Legends of the Dark Knight #16-20, two years prior (though from Batman's point of view, that story occurred early in his career). One notable difference in the comics is that he wears a full mask, not one with holes in the luchadore style.

SOUNDS LIKE: The first of two voices for Bane, Henry Silva's notable credits include Ocean's 11, The Manchurian Candidate, Dick Tracy and Ghost Dog.

REWATCHABILITY: Medium-High - A couple of ill-judged moments can't take away from the intense introduction of a key Batman villain.
Batman DCAU

Green Luthor said…
I agree; it was kinda neat seeing a villain with his own little team like that. Made a nice contrast to Batman with Robin, Alfred, Gordon, et. al. I thought.

And, yeah, obviously, Bane was, like Doomsday, created just to drive the upcoming "get rid the hero" story, but I also thought they did a much better job with Bane. Doomsday just shows up, no background, no personality, just starts destroying things with no discernible motivation... boring. (I've other complaints about that story, but... probably not the time.) Bane, at least, had a background and motivation and wasn't just a plot device. And his "break everyone out of Arkham so that Batman has to overwork himself to catch 'em all, then strike when he's too exhausted to fight in top form" made some degree of sense, too. I've seen villains come up with worse plans against Batman...

Actually, I kind of saw this episode as a counterpoint to Knightfall. Like the writers said "Okay, but what would have happened if Bane hadn't been able to weaken Batman so much ahead of time? How would the back-breaking fight go then?" And decided Bane wasn't coming out on top without the specific circumstances of Knightfall. It doesn't really repudiate Knightfall, just says that Bane was able to create a situation in which he could beat Batman, but that doesn't mean he's actually *better* than Batman. (Basically, I find Bane far less of a deus ex Mary Sue than Doomsday.) (Am I making any sense?)

Also, I can't think of Henry Silva without being reminded that he was also in Megaforce. But I'm sure he'd rather not be reminded of that. :) Plus, he was in Amazon Women on the Moon, but he might have only taken that job for a quick buck. (One of my favorite bits from that one...)
April 16, 2016 at 3:20 PM

LiamKav said…
Oh, that makes perfect sense and I 100% agree. He observed Batman, figured out one of his flaws (he won't rest whilst one of his rogues is actively commiting a crime), and then exploited that weakness. Doomsday just turns up and smashes things.

(Saying that, I've always appreciated the simplicity of Doomsday, but a bit like Man Of Steel putting Superman in an "impossible situation" it doesn't quite work. You can fly, Clark. Just pick Doomsday up and thrown him into space. Or go and grab a mountain and drop it on him. Anything apart from standing there and slugging it out with him. But that's a conversation for another day.)
April 16, 2016 at 5:32 PM

Anonymous said…
There are many versions of the Batman / Bane fight that map to different worlds in the multiverse. Here on Earth-Prime, here is that fight:

All the majesty you'd expect of an angry Bane taking on a physically ailing Batman over, um, reasons.
April 17, 2016 at 9:37 AM

Anonymous said…
(Saying that, I've always appreciated the simplicity of Doomsday, but a bit like Man Of Steel putting Superman in an "impossible situation" it doesn't quite work. You can fly, Clark. Just pick Doomsday up and thrown him into space. Or go and grab a mountain and drop it on him. Anything apart from standing there and slugging it out with him. But that's a conversation for another day.)

It's technically the next day as I type this, therefore I can respond! The problem with Doomsday is as you say, but the problem is compounded by how many other characters were present who could have taken care of Doomsday the same way. I remember Guy Gardner being on the scene, and I can totally imagine him having fun making a gigantic golf club and batting Doomsday around with it for a while. At such point as he'd gotten bored with humiliating Doomsday, he might have strapped a Wile E. Coyote rocket to Doomsday's back and sent him into space. You can make the case that Guy Gardner wasn't a great tactical thinker back then, but he was at least sadistic enough to have played with Doomsday like a toy. Then he might have gotten careless, which would explain why Superman had to finish the fight at all ... but ... that's not the story they told.
April 17, 2016 at 9:49 AM

Tony Laplume said…
The one flaw in Bane's development was the need to accelerate the whole story. If he had been a Kingpin figure, I think fans would think him less gimmicky. But then, we think of Kingpin as a Kingpin figured because Frank Miller pulled a Bane with him...It's sad that most fans (and comics like Secret Six eliminate Bane's keen intellect from the equation, and make him out to be glorified muscle. "Knightfall" went out of its way to demonstrate how ridiculously calculating he was intended to be. And so we end up right back at the Kingpin analogy. And just like Miller's Kingpin, writers have been obsessed with duplicating "Knightfall" ever since...
April 18, 2016 at 1:07 PM

LiamKav said…
There is some of the intelligence in this episode, where he plans on using Croc as a way to get to Batman. It's slightly undermined by him immediately saying "er, any idea where Croc is?" to Thorne though.

The sequence with shirtless Robin shows that they were playing Dick Greyson for sex appeal even back then. Pity he seems to have so much trouble with Candice though. Even tired as he would be, that's a fight that should last roughly 6 seconds.

To be fair, any opening is going to look poor next to possibly the greatest opening sequence on TV (with all due respect to Frasier, Doctor Who and Babylon 5 season 3). The Superman: TAS titles are similarly a montage sequence and feel like a massive missed opportunity.
April 18, 2016 at 8:50 PM