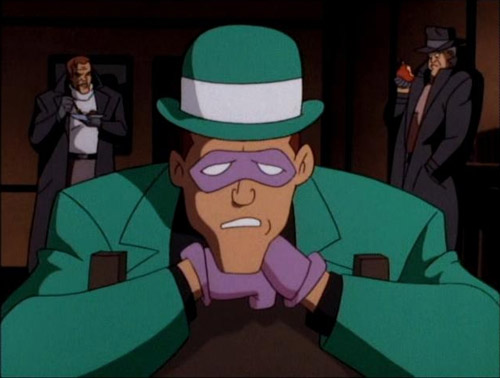 IN THIS ONE... The Riddler becomes a spokesperson for a toy company, but still can't help committing riddlesome crimes.

REVIEW: Yet ANOTHER failed reform story (the next episode makes three in a row), and probably the Riddler's best. I haven't been very enthusiastic about the way he was played on the animated series, with all the elaborate death traps and giant mazes/board games, but this felt much more like a classic Riddler tale. The riddles are subtle, to the point where you might think Batman is reading too much into them, and the death trap, when it does occur, is simple and elegant, with just the right touch of wackiness. The episode actually primes you to think Batman is being unfair to the Edward Nygma, he and Robin painted as dark black figures through most of the tale, while the Riddler's world is one of colorful brightness, and his henchmen such simple doofusses, they might actually be part of a benign scheme that puts Batman through his paces, but has nothing of the criminal to it.

And it would be to Nygma's advantage not to give in to his criminal impulses - wealth, fame and love are his for the taking - but his obsessions cannot be denied. The episode intimates that he is driven by vanity - getting all those conversations in the mirror - and that he must prove himself by defeating Batman. Indeed, had Batman perished in his death trap, that might have truly spelled the end of his psychosis. We see him burn his mask and uniform, giving up the game now that his one true nemesis is dead. But he isn't, and Nygma is instead condemned to circle the drain of mental health trying to figure out how Batman escaped. Batman's a good crimefighter, but maybe not a great psychologist. Which, fact it, is what a lot of his enemies need.

I do want to mention the animation, this time around, because while Season 3 has been near flawless to date, the movement in Riddler's Reform is particularly exceptional, whether we're talking about fight choreography, or humanizing gestures. Top notch stuff.

SOUNDS LIKE: Patricia Alice Albrecht who plays Brenda (the woman who flirts with Nygma) was Pizzazz on Jem and the Holograms. William Katt, the star of The Greatest American Hero, is the voice of Zowie, the youngest of the Riddler's two henchmen. The eldest, Manny, is played by Robert Pastorelli who was the recurring house painter on Murphy Brown. As for Charles "C.B." Baxter, the toy mogul, that's Peter Mark Richman, who played, among other things, Chrissy's dad on Three's Company, and Andrew Laird on Dynasty.