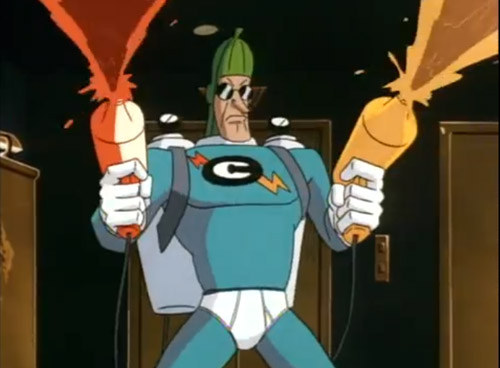 IN THIS ONE... The Joker means to have a captive audience at a comedy contest. Ah, and the Condiment King makes his first appearance.

REVIEW: While Make 'Em Laugh gets points for creating the Condiment King, an outrageously silly Batman villain, it soon strains the audience's patience with two more lame ducks - the forgettable Pack Rat, and the misogynistic Mighty Mom whose main claim to fame is giving Robin a good spanking (why does Dick keep getting trounced by never-rans like this?) - before handing the plot over to the real big bad, the Joker, who's equally trapped in a dull plot sadly lacking in memorable action set pieces.

I suppose if you're going to put the Joker on stage and have him perform stand-up, he should be funny. He isn't. Or if he's meant to be a failed comedian who turned to crime, it all seems a little late (post-acid bath, as it were) for him to try these shenanigans. I guess the problem is that he's lacking the chaotic personality that makes him such a great villain. He not only seems predictable, but pathetic, with a motivation far too simple to be worthy of him. If you'd just created a B-list Batman villains called The Comedian, and had him pull this stunt, then be outraged and humiliated when people laughed at his splapstick defeat (dropping his pants? how droll), I could almost buy it. And there would be no further stories to tell with the character. But I'm meant to believe the Joker was cut out of a comedy show a year before, and didn't take his revenge right then and there? Preposterous.

They could have done something with the fight atop the clown balloon, but it's rather limp, with the Joker the instrument of his own demise, and his falling to his almost death is a mere repeat of what happened to the Condiment King earlier. A surprising failure given the elements involved.

IN THE COMICS: The Killing Joke proposes a possible origin of the Joker in which he is a failed comedian. The DCU got itd own Condiment King - Mitchell Mayo, not Buddy Standler - in Batgirl Year One #8 (2003). He would clash with Robin a couple times until he was killed in Final Crisis. A non-ridiculous Pack Rat would also premiere in Legends of the DC Universe #12 (1999) fighting the Justice League. Mighty Mom has not made a mainstream DCU appearance yet.

SOUNDS LIKE: SCTV's Andrea Martin plays Lisa Lorraine/Mighty Mom. As for Buddy Standler/Condiment King, he's Stuart Pankin from Not Necessarily the News. And Harry Loomis/The Pack Rat is played by Grant Shaud, who was Miles on Murphy Brown.

REWATCHABILITY: Medium-Low - To be clear, this is an episode in which the Joker is outshined by the Condiment King. The Condiment. King.
Batman DCAU

American Hawkman said…
The Joker forgetting a slight until he lunges into an elaborate revenge scheme years later is perfectly in character for him, but I certainly agree with the rest.
April 22, 2016 at 4:20 PM