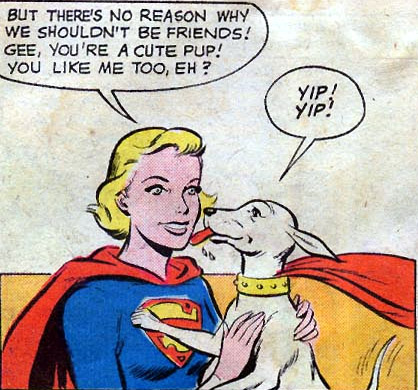 Once we get through two pages of Supergirl recapping her entire history and the reasons she can't reveal herself to the world, "Supergirl's Farewell to Earth!" offers one of the biggest pieces of Superdickery of the Silver Age, and poor Krypto gets roped into serving his wicked, conceited, insecure, jerk of a master to pull it off.

Consider: Supergirl is secretly saving kids in the woods when she's approached by Krypto, whom she's heard about but never met. Krypto takes to her and they have secret fun burrowing through mountains. 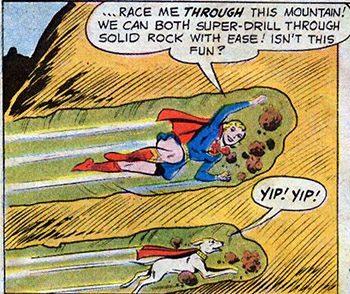 But the fun ends when they're caught in the act by Superman, who accuses Supergirl of having revealed her secret... to a dog! 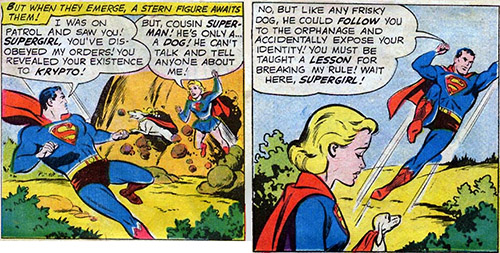 Sounds legit. Krypto could be dumb enough to follow her to the orphanage and blow her cover, but... doesn't that mean Krypto could blow Clark Kent's? That doesn't seem to be an issue. Anyway, because she broke the cardinal rule, she must be taught a lesson. Her punishment: Exile from Earth for a year! 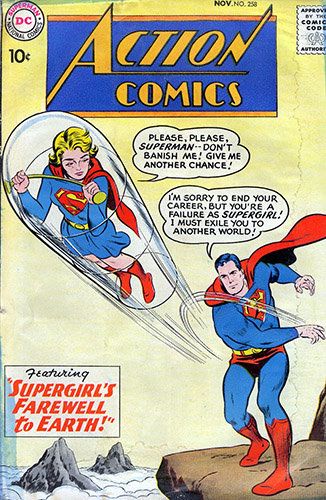 Yeah, that won't screw with her cover... To his credit, our hero - Krypto - tries to fly to her aid, but Superman holds him by the collar. Supergirl's exile is on a crazy giant mushroom-filled asteroid a stone's throw from Earth. Just accept it.

From there, Supergirl watches Earth and occasionally helps out, aiming giant icicles at forest fires and the like. After a week, she gets a visit from Krypto. He bears a message.

So she can return for one day to avoid a Green K meteor shower. But it's been a week, and there are people looking for the lost orphan in the woods. Linda dirties herself up and comes walking out of the swamp, after which very antagonistic journalists absurdly try to take her story apart - why don't you look more emaciated? Why no mosquito bites? Geez guys. Those are the kinds of things you'd ask someone you suspected of being Supergirl, even though no one knows she even exists! Well, would it help make sense of the situation if I told you that one of these journos is Clark Kent? That's right, and Supergirl, who has never met Superman's alter ego, comes out to him. 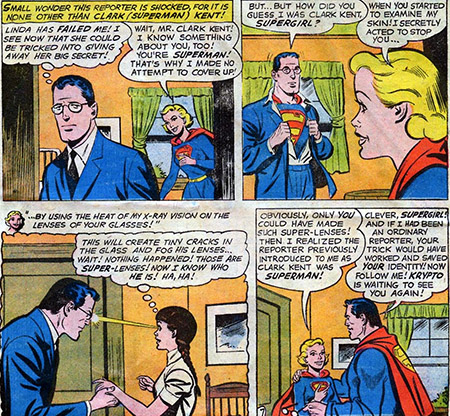 Ahh, see? Two can play the Suerpdickery game. Cards on the table then. Superman admits to having sent Krypto her way to trick her, and to sending her to space to see if she could keep her existence secret through the toughest circumstances. She passed the test, but NO WAY is he going to let her reveal herself to the world now. Then why test her now?

Oh this was your way of telling her you're Clark Kent? Those hesitations tell you're lying, Dick of Steel.

Don't worry, Krypto. We don't blame you for any of this.

I had to explain the awesomeness that is Krypto to my girlfriend a couple of weeks ago. She remains unconvinced :-(
April 18, 2016 at 11:41 AM