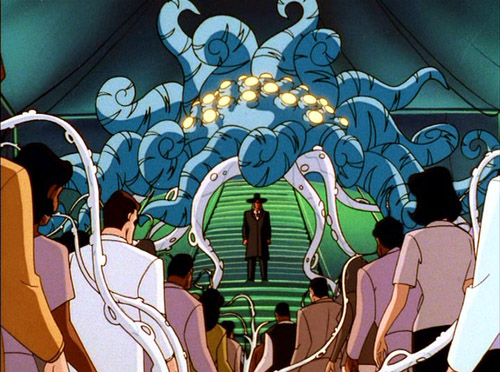 IN THIS ONE... Smallville falls under the sway of an Elder God.

REVIEW: Always up for a Supergirl episode, and her "ordinary" life in Smallville, while not her cup of tea, does feature cute bits where she scares the cows and chickens while doing her chores. The town is shown as idyllic, with music and bird song appropriate to the setting, nice people on every corner, etc. It's about to be contrasted, but not by Metropolis, which is portrayed as an exciting insider culture, where Kara gets a backstage pass to everything thanks to Lois and Clark. Charmingly told with pictures and voice-over, one of these animating into a rematch with Volcana (who really should have stayed on that island, I guess she got bored too).

Then Kara returns to Smallville and finds it overtaken by a gross Cthulhu monster worshiped by a wicked Southern preacher, with brain parasites in every brain - including the Kents' - which can propel disgusting tentacles out of their hosts' foreheads and mouths, in infinite capacity and against all the laws of biological common sense. That's fine. It's a cartoon. And it gets a pass because it's terrific body horror, especially given Ma and Pa's infection.

The third act isn't as strong, however. They essentially decide the parasites can be destroyed with X-Ray vision, and after a few hits, the tentacles turn into a gross milky substance, and magically, the hosts are freed. The preacher is a full-on alien however, and transforms in that anime way, which forces Superman to kill him. I guess gross Lovecraftian monsters don't count. So the ending loses a lot of its horror feel, can't deliver on any real shock, and doesn't have anywhere to go with its main villain except excusing Superman's rare lack of ethical dilemma. And if you watch the episode, you get the sense the good Reverend Howell didn't start in Smallville, that maybe his bus was full of infected people going all over the United States/Earth. It's never addressed. It's all too easy.

IN THE COMICS: Reverend Howell and Unity are original to the show and have not appeared in the comics. The takeover of Smallville by an alien force is reminiscent of the townsfolk being turned into Manhunter sleeper agents during Millennium, but only on the surface.

REWATCHABILITY: Medium - How you're done getting charmed by Supergirl and reeling about Ma Kent used as a creepy alien, there's really not much else this episode can do with its premise.
DCAU Supergirl Superman

American Hawkman said…
A less-Elder God version of Unity did indeed appear in the comics, during Stern's run.