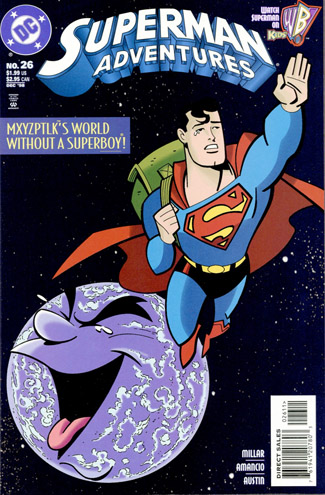 IN THIS ONE... Mr. Mxyzptlk goes back in time to prevent Clark Kent from becoming Superman.

REVIEW: A fun Mxyzptlk story that creates a neat paradox and plays around with the "what if"/imaginary story formula, giving us a Superman tyrant that's all Mxyz' nasty imagination, then a world without Superman timeline where his supporting cast doesn't fare very well. Oh and THEN, that world besieged by Mxy' magics, which is extremely loopy (no wonder I wrote about these permutations in Reign of the Supermen)... and to him, absolutely boring. He needs a Superman to make his trips to our dimension at all interesting. The young "Superboy", told of his real future, turns the tables on Mxy by calling his reverse-name contest boring, and the imp leaves infuriated. Even though Pa Kent calls Clark out for not yet having enough wisdom to come out of the superhero closet, it seems he's already realized that you don't encourage someone like Mxy by playing his game.

Pa wasn't exactly wrong, mind you. Clark HAD just been daydreaming about punching a bully to the moon, and had no real plan for keeping a normal life while also using his powers. Mxy provides the answer without meaning to. He gives Clark the costume, and though the teen doesn't remember it the next day, Pa did glimpse it out the window, and inspired by this "dream", draws a Golden Age Superman on a notepad (yet another Superman in this story), which is both a pleasant paradox and nice tribute to Superman's creation on Earth-Prime. As with many Mxyzptlk stories, it's all a little disjointed, but lots of fun. 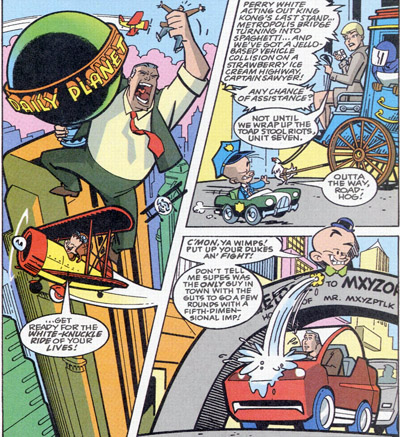 IN THE MAINSTREAM COMICS: Dark timelines where Superman either never existed (Flashpoint) or became a tyrant (lots of Elseworlds) is a staple of Superman comics. In fact, Mark Millar wrote one of these (Red Son), though it's not quite as dystopian as some of his later work. In the DCAU, as in the post-Crisis DCU, Clark Kent was never the Superboy of Smallville, but Mxyzptlk makes it happen here, if briefly, complete with a Krypto-like dog. Pa Kent's sketch of the Superman costume looks like a Joe Shuster original. Even the cover is a tribute to the past with its "crying Superman".