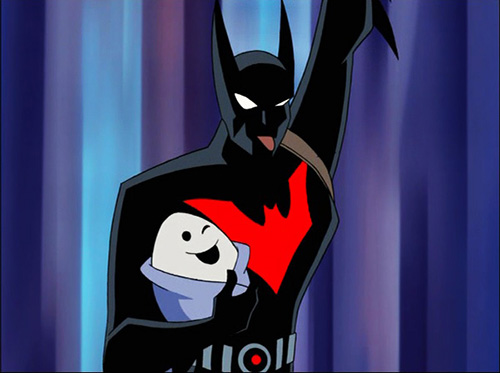 IN THIS ONE... Terry must take care of a fragile eggbaby for Home Ec class, even as Batman.

REVIEW: Batman Beyond can legitimately go for high school sitcom tropes, and that's exactly what happens when Terry finds himself failing Family Studies and must take care of an "Eggbaby" (a cross between the chipped doll and the fragile egg common to these stories) for a week. Paired with Blade, the worst mother in the class, he basically has to bring that thing on Bat-patrol. Hilarity ensues. And I did laugh out loud at points. It's just so ridiculous that not only must Batman compose with leaving the baby in dumpsters while he gets into fist fights and letting himself get dragged on his front so the egg in his backpack doesn't get hit, but it's those very things that make him succeed where other kids fail. His baby was the only one "stimulated" in addition to its physical needs cared for.

This is actually an episode where I would have loved to see more of the other couples and their handling of the situation. Max gets paired with Nelson and decides to be a "traditional family" where the bread winner (that's her) works, while the other alone takes care of the child (Nelson gets someone to do his homework, shway). Howie is a doting worrywart to Dana's more level-headed approach; amusingly, he can barely stand to let anyone touch the baby, even her. And Blade choosing boys over motherhood, well, that's the reason I always hated group projects.

The theme of parenthood - and what could happen if you were bad at it - is also present in the crime plot, which introduces us to Ma Mayhem (a Ma Barker substitute) and her two boys, the techie weasel Slim, and the dumb brute Carl. They're played for comedy, but are still dangerous, provide a mystery (why is Ma so keen to steal just those rubies?), and both dish out and find themselves on the receiving end of some nice black comedy. The abusive Ma telling her sons the Eggbaby reminds her of them before ordering it be chucked off a balcony for example. And is "This is getting old, Batman" "Look who's talking" is surely Terry's best burn in the whole series.

IN THE COMICS: Ma Mayhem is, according to the production team, visually based on Panama Fatty from Jack Kirby's The Losers.

SOUNDS LIKE: Ma Mayhem is voiced by Kathleen Freeman, Sister Mary Stigmata in The Blues Brothers. Her sons Slim and Carl are played by NewsRadio's Andy Dick and Mark Rolston, who played BTAS' Firefly, respectively.

REWATCHABILITY: High - A very funny episode where all the pieces contribute to the whole. Deserving of its Emmy.
Batman DCAU

Anonymous said…
I was somehow afraid you wouldn't enjoy this episode. Glad you liked it; it's one that works pretty well without much Bruce.

"Kim Possible" did a flour baby episode as well, with Kim's clumsy buddy Ron Stoppable as the "parent". There are ... a lot of flour babies that don't make it to adulthood.

Unknown said…
I saw this when it first aired. At the time I thought the Eggbaby looked a lot like Big Fat Baby from Histeria!
December 8, 2016 at 11:55 PM