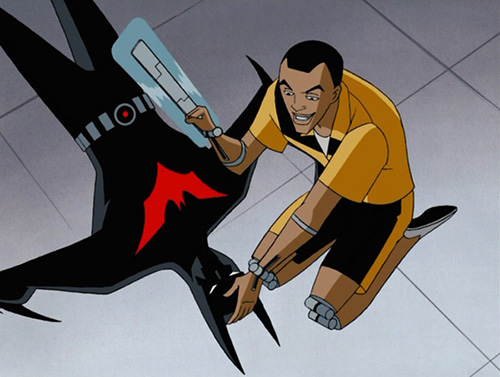 IN THIS ONE... Criminals hold a doctor's wife hostage to get bionic limbs.

REVIEW: I like the four bionic punks Batman tangles with in this episode, and really wish they'd gotten all their code-names in dialog instead of in the credits (I like Kneejerk especially). Starting with the previous episode, I'm seeing an improvement in the action beats that's continued here, with interesting tricks from all the participants, hard hits, and good choreography. The way they're initially beaten and then wake up more dangerous than before creates a bit of a disconnect within the sequences, but mostly, it's good fun.

I'm not so keen on the plot as a whole though. We have a Dr. Corso whose wife has apparently been taken hostage by these four hapless thugs. As soon as we see her in flashback as a sexy (and unprofessional) nurse, with all due respect to May-December couples, you KNOW she's working with them and isn't a hostage at all. The reveal is anti-climactic, though full props to Corso's emotional "acting" on several occasions. You don't see a grown man cry like that one garden-variety cartoons. But that's not really my issue. No, my issue is the tortured way they get the title "April Moon" into the script, with Terry knowing this "classic" song (from 1990), awkwardly mentioning it, so it's dead obvious it's the codeword that triggers the bionics' failsafe. If at least he'd have had to remember the words of the song or sing it, but it's hardly any work for the hero.

Let's throw in some hokey CG effects to get us in and out of the flashback, and a harsh revenge epilogue which shows Corso apparently murdering Bullwhip on the operation table, or hey, about the fact April seduces the good doctor with cereal (WTF???), and you've plunged me into deep ambivalence. Good thing the action is fun.

SOUNDS LIKE: Dr. Corso is played by Ed Begley Jr. of St. Elsewhere fame (and also Arrested Development, Six Feet Under, The West Wing, and lots more). April Corso is played by Daphne Zuniga from The Fly II and Spaceballs. Knux, the youngest of the bionic four, is voiced by The Big Bang Theory's Johnny Galecki. Kneejerk is Eric Michael Cole (Gia, White Squall), Terrapin (the armor guy) is Ethan Embry (Vegas Vacation), and Bullwhip is Jason Nash (semi-finalist on Last Comic Standing).

REWATCHABILITY: Medium-Low - Watch it for the action scenes, because the plot either thinks you or Batman is dumb.
Batman DCAU