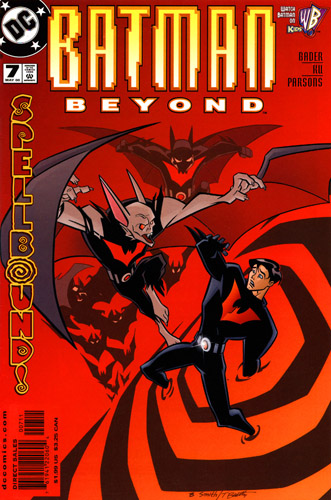 IN THIS ONE... What if Terry's kid brother were Batman?

REVIEW: On the one hand, I enjoy "what ifs" and imaginary stories, so seeing Matt as Tiny Batman, and a jokier relationship between this Bat and Bruce, so this story brings me a certain measure of joy. On the other, there's something incredibly clumsy about the way the comic, as packaged, deals with the revelations that story hinges on. The cover is largely at fault. Quite beyond the fact it shows scenes not in the book, i.e. Terry fighting the Man-Bat version of himself, it also spoils Spellbinder's involvement. Yes, sure, there's a twist - the story is a hallucination given Terry by Bruce, not Spellbinder, to confuse the villain's mind-reading machine, but we still must have figured out he was the school psychologist in disguise thanks to that cover, and thus that the alternate reality on show was a hallucination. In any case, why does Terry even HAVE to undergo the mind scan? Why can't Batman capture the villain the night before?

And the conceit doesn't really work, does it? Why would Terry be implanted with memories of things happening when he's not present? There's an awful lot of Matt-Bruce action in here which must be considered a cheat. Jettison Spellbinder and give me another reason for Matt to be Batman, and it's a pretty neat alternate reality. I'll give Bader her due. Matt has to contend with early bedtimes, no driver's license, and being short. He also has more fun, infects Bruce with that sense of fun, and is a little less competent in fights. It's well thought-out, which I guess makes sense if Bruce designed it.

The issue also introduces new rogues not seen on the television show. These are the kind of technological/cyborg antagonists that don't require much set-up in the future world. Stinger is pretty lame, but there's a crazy body horror element to the armless Cable Man. I'd like to see the comics series develop more villains, in fact. And a quick word about Ku's art: While the regular artist on the series, Craig Rousseau, has a strong clean line, Min Ku gets the atmosphere a little better. I like it. 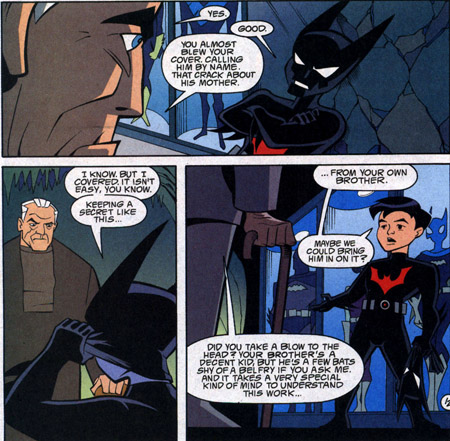 IN THE MAINSTREAM COMICS: It might seem like Matt is too young for Bruce to recruit him, but in the comics, he did turn 10-year-old Damian into Robin. Well, maybe Talia al Ghul did that.

REREADABILITY: Medium - Bader has fun with the alternate reality, but the real world sequences aren't as strong.
Batman Comics DCAU